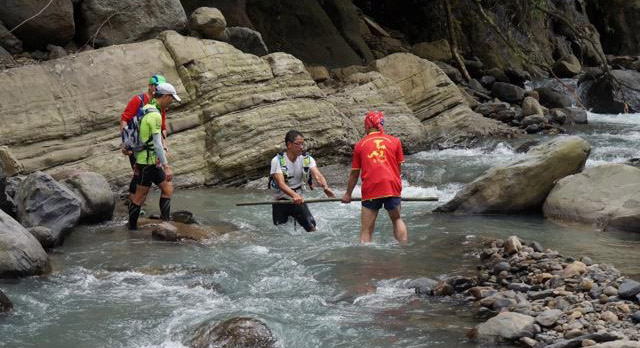 When the alarm went off at 1 a.m., I had no idea what I was getting myself into.

I was in Taiwan for a series of meetings and had been happy to find a 50K the morning after my meetings ended.

Had I been paying closer attention, the name “Taiwan Beast,” and the list of required survival gear, might have tipped me off.

A Beast Is Born

The man behind The Beast is Czechian Petr Novotny, who moved to Taiwan in 2012 to get his PhD, and then dropped out and became obsessed with running through the country’s forests. He began spending hundreds of hours exploring the centuries-old hunting trails. Most of these trails had been overtaken by dense rainforests, but Petr and his friends spent countless hours hacking their way through, mostly out of curiosity and a sense of exploration. The Beast trail, an hour’s drive from Taipei, is the result.

In 2015, a year after being completed, the trail was damaged by the biggest typhoon in Taiwanese history. It took hundreds hours to fix the trails in time for the inaugural event, which was scheduled for that summer. Then, just a few months later, another typhoon ripped through the region. Petr postponed the race.

When the Beast finally took place in October, only a third of racers finished.

At 2 a.m. I met the other runners at a nearby bus station. Everyone seemed relaxed enough.

At 3 a.m. our bus arrived at a covered picnic area beside a vast forest. Students from a nearby aboriginal orphanage school performed a traditional war dance, and at 3:30 a.m. a hundred of us raced into the dark forest.

It turns out that the beast trail is not really a trail, but more of a general path through the forest demarcated with bright ribbons hanging from trees. Within 20 minutes, we were climbing straight up the first of four massive mountains.

The course features 4,000 meters of elevation gain over ridges, peaks and countless technical faces, often so steep that we weren’t running, so much as sliding backwards, lurching forward and digging our fingers into the mud to gain a few precious inches. It felt more like mountain climbing than racing, with muddy shoes and no equipment.

The downhills were similarly steep, so we navigated them by sitting down and inching forward through the deep mud. In between impossibly steep climbs and descents, we splashed our way across knee-deep, swift-moving rivers—a welcome respite from the 90-degree temperatures.

I stopped counting at 30 cliff faces and 15 river crossings.

Unlike supported races in the United States, where aid stations are frequent, the Beast’s aid stations were three or five hours apart, and there was no opportunity to drop bags in advance. You must carry everything you need. For us neophytes, it took a lot of getting used to. I arrived at each aid station looking and feeling like someone stumbling out of the desert after a long exposure, gulping water and cramming rice. Luckily, the aid-station staff could not have been more hospitable. Black pork fat over rice is not something I would eat every day, but, out there, it tasted like soufflé.

Little by little, one treacherous peak after another, we made our way forward. At one point, I found a veteran of the 500K Sahara Ultra crawling on the ground.

“This course is not possible,” he muttered, his entire body covered in a thick coat of mud.

At around 9 p.m., a fellow runner and I made our final descent through the pitch-black forest, and crossed the finish, where a banana and a humble bowl of instant ramen soup awaited us.

That was really it: a lonely pavilion and a few people. After eating we hitched a ride on the abandoned road from the middle of nowhere back into Taipei.

I normally run a supported mountain trail 50K in six or seven hours, but felt like a speedster completing the Taiwan Beast in only 18 hours 45 minutes.

Lots of runners faltered along the way and stumbled like roadkill into the aid stations, where they would give and be taken back to the start. But for those of us who struggled through, it was a truly spectacular experience.

Jamie Metzl is a Senior Fellow of the Atlantic Council, novelist, blogger, syndicated columnist, media commentator and expert in Asian affairs and biotechnology policy.  He has completed 30 marathons, 13 Ironmans and 10 ultramarathons. His latest novel, Eternal Sonata, explores the future of human-life extension. www.jamiemetzl.com.