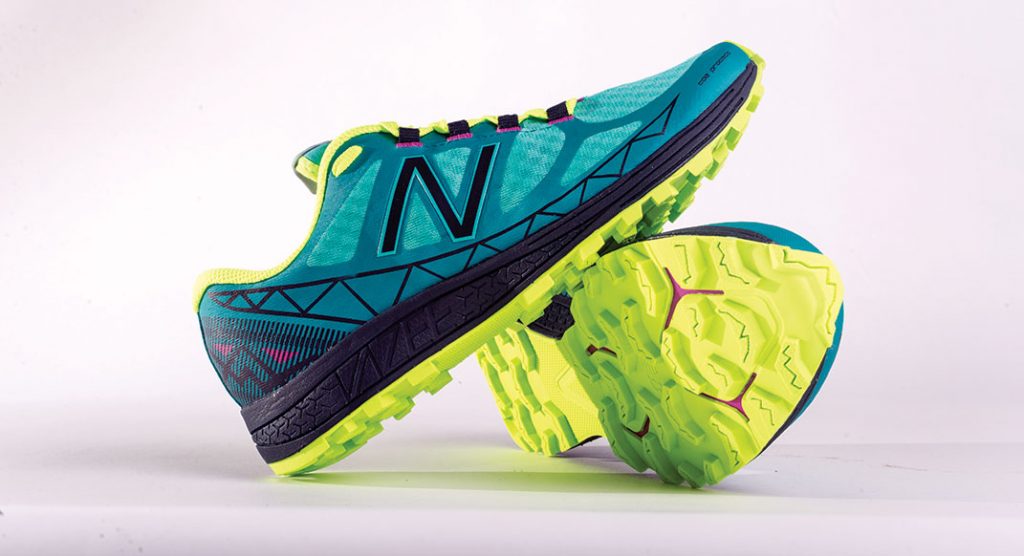 The latest and greatest trail-running shoes.

I spent a recent vacation in western North Carolina, where green-blanketed mountains sprawl across the landscape. The highest summit around was almost exactly the elevation I live at in Colorado, and many nearby “peaks” could be reached after a 1,000-foot climb. This should be some nice, relaxing, low-key mountain running, I thought.

Until, within a few tenths of a mile, the trail ramped up to the grade of a stepladder. Plus, everything was rainforest-wet: the dirt, the slimy layer of fallen leaves, the roots and chunky rocks that seemed to take up two-thirds of the trail. I began daydreaming about western Colorado’s long, dry, dusty switchbacks.

It was a stark reminder of how much “trail running” varies from place to place—and, consequently, how different each runner’s trail-shoe needs are. With that in mind, here are 11 of the latest models. Whatever you prize—traction, protection, agility, cushion, responsiveness, light weight, a certain fit, splashy colors—you can find it here. 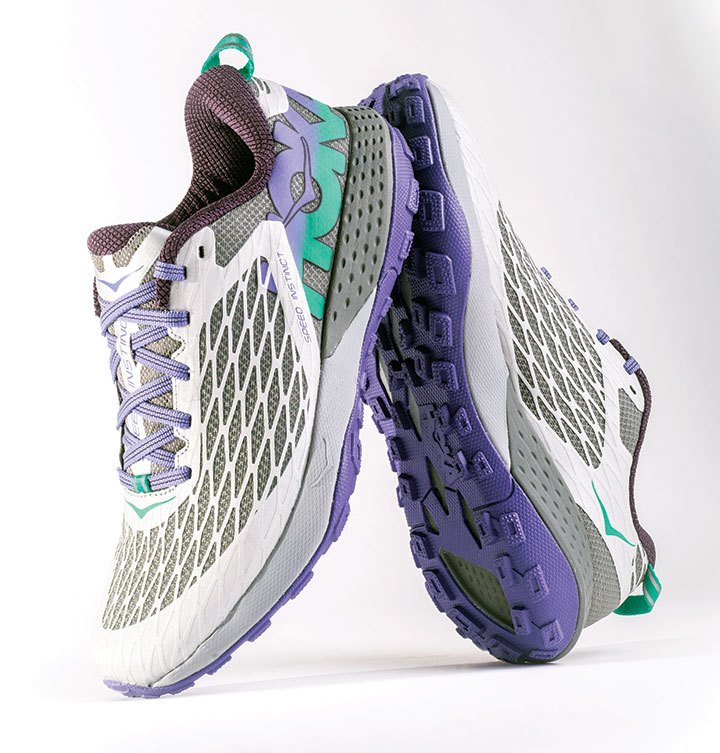 Hoka’s lowest-profile shoe to date, the Speed Instinct is also the fastest, most agile model we’ve seen from the brand. The cushioning—at around 20 millimeters in the forefoot, still ample, just not quite “Hoka-esque”—has the firmness to feel responsive at faster speeds, but with enough give to protect the feet on longer efforts. The Speed Instinct also lends confidence on technical terrain, due to its lower stack height, relatively flexible forefoot and solid tread, which grip well on most surfaces, though lose a little purchase on loose or soft ground.

This interesting new offering should appeal to max-cushion diehards who would like something speedier for workouts and races, as well as more minimal runners wanting a higher-cushion “gateway” shoe that doesn’t feel unwieldy. Testers did have a few issues with the upper creasing around the toes and causing hotspots during longer runs.

Fit: True to size, with a low-volume toebox. 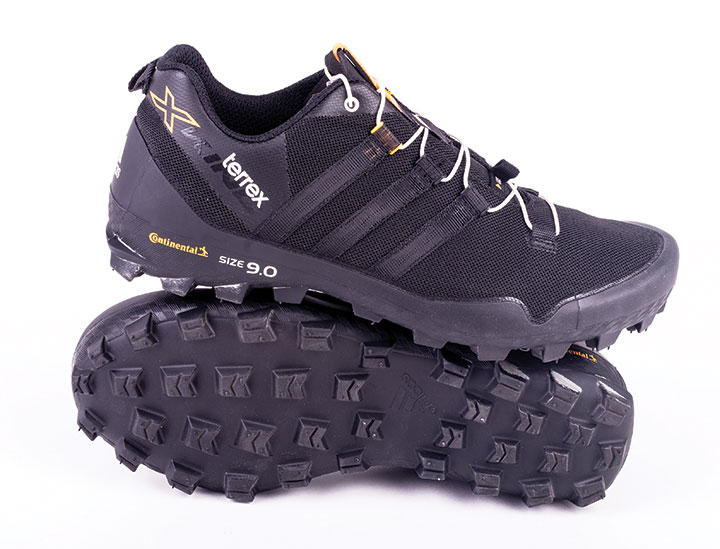 Adidas bills the X-King’s outsole as “constructed like a mountain-bike tire,” and it’s certainly aggressive, with large, blocky lugs of sticky Continental rubber that hold fast in mud and on wet rock alike.

However, those large lugs made for an overly soft, energy-draining landing. In addition, the heel-toe transition feels clunky and boot-like. It’s not a shoe for speed, or for cruising on buffed-out singletrack, but could serve as a stable, protective shoe for slower-moving mountain exploits, like peak bagging, scrambling or fastpacking.

Drainage was impaired by the rubber rand that extends up from the outsole, and the ankle collar felt stiff to some. One innovative feature was the removable, one-piece insole/midsole, helpful if you wear custom orthotics.

Fit: On the large size. In general, testers liked the fit—secure, with a roomy toebox—though the shoe only comes in men’s and in full sizes, so sizing can be tricky. 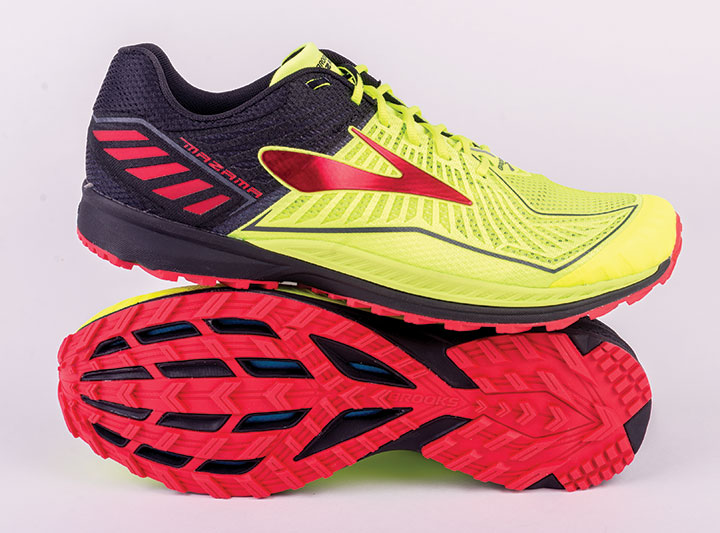 The Mazama is Brooks’s first true racing shoe for the trails, with a narrow fit, a stiff, rockered midsole and a relatively light weight.

In one sense, the shoe worked as advertised, holding the foot securely and providing additional spring at toeoff for a speedy feel. However, most testers found the midsole overly stiff and wished for more flexibility and ground feel; it also promoted mild pronation, some said. The upper, while durable and protective, was similarly unforgiving.

The tread worked adequately on dirt trail, but the hard-rubber compound gripped poorly on rock, especially when wet.

Fit: True to size, with extra length in the toebox; narrow throughout. 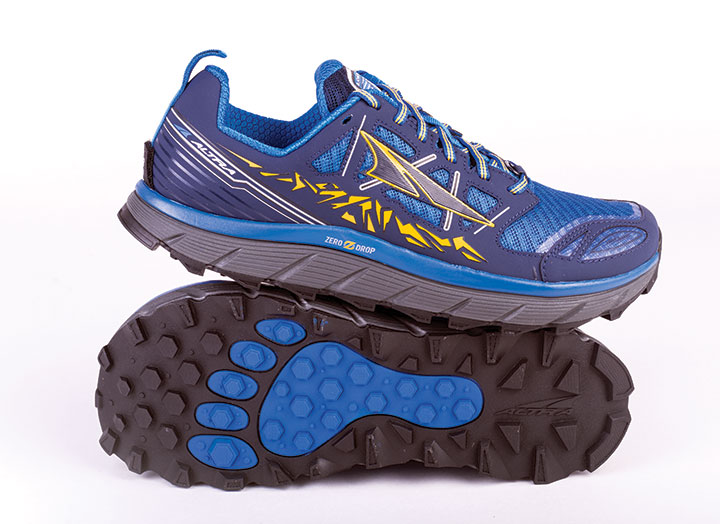 This latest round of updates to Altra’s Lone Peak make it a somewhat nimbler (and lighter) shoe, while preserving what testers liked about previous models. Most significantly, the slimmed-down fit and more substantial mid-foot overlays held the foot securely, eliminating most of the sloppiness of the previous version.

Testers praised the balance of softness and responsiveness for its performance in daily training and ultras, and the redesigned outsole, more aggressive and tacky, gripped well on varied terrain, including rock and loose ground. Altra’s uppers have tended to blow out early in past shoes, but the Lone Peak 3’s reinforced upper seems to have fixed that issue.

Fit: True to size or a bit small; comfortably roomy. 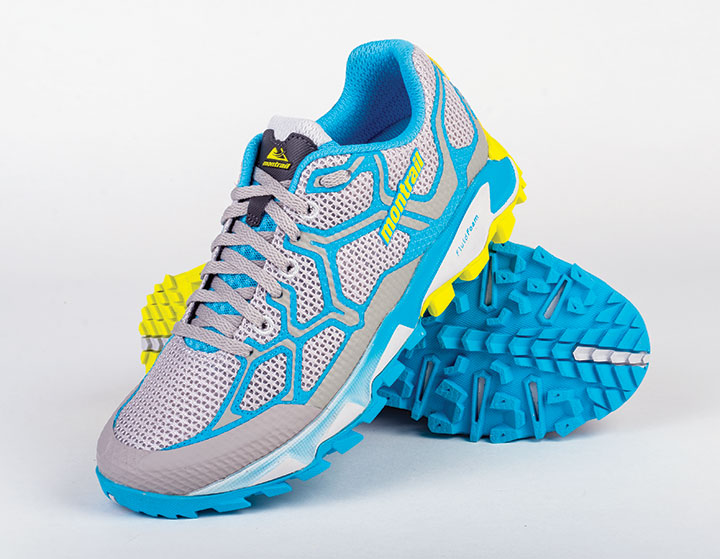 The Trans Alps F.K.T. is a somewhat lighter and more responsive version of the regular, super-burly Trans Alps. The aggressive tread, with multi-directional, six-millimeter lugs, performed well on most surfaces (though collected mud). One tester noted that the tread under the heel was “great for those times you think you may slide down a rock face.”

Though a little clunky for groomed trails or road-to-trail use, testers found the ride surprisingly responsive for the weight and degree of protection, with resilient cushioning and a bit of flex in
the forefoot.

Fit: True to size; secure in the mid-foot, with a medium toebox. 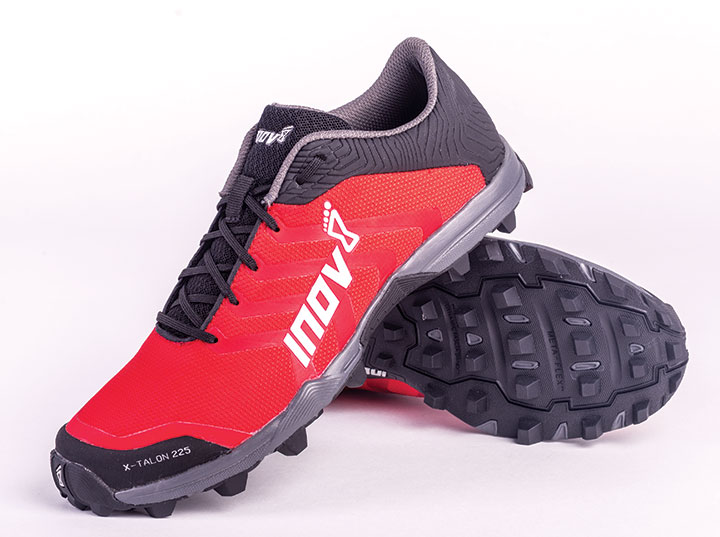 In testing, the standout feature of the X-Talon 225 was its tread. Toothy eight-millimeter lugs dug into snow, mud and steep or loose ground; the sticky rubber also gripped well on slick surfaces. As one tester wrote, the traction was simply “INSANE.” Add that to the superior ground feel of the flexible, minimal midsole, and you have a precision instrument for climbing and descending the most technical trails.

The fit, while secure, felt uncomfortably narrow to most testers, and the tight, protective mesh didn’t have enough give to ease the cramping. Due to its minimalist design, most runners will want to save the X-Talon 225 for shorter outings. 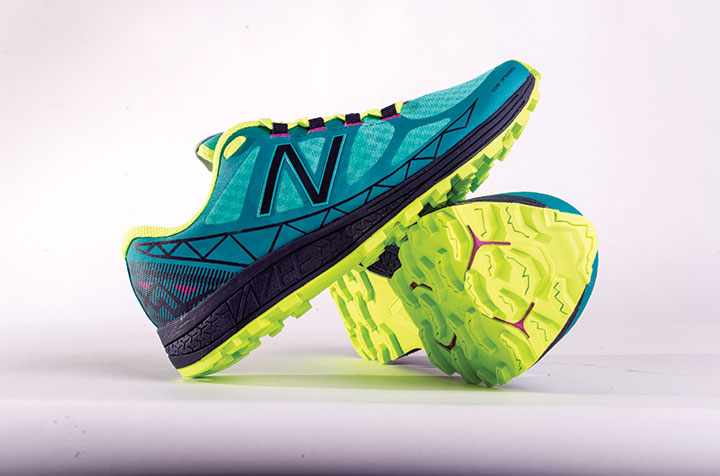 New Balance calls the Vazee Summit a trail shoe “with the spirit of a racing flat,” and testers loved how fast it felt—a function of the responsive midsole, light weight and secure fit, dialed in by a neoprene mid-foot liner and seamless upper. Though the shoe is listed at a 10-millimeter differential, it seemed lower; mid- to forefoot striking felt natural. The tread performed well on varied surfaces without feeling too obtrusive on pavement, and the rock plate offered moderate protection.

While the cushioning isn’t there for big miles—and the fit may be too snug for foot-swelling long runs—it’s a go-to for up-tempo workouts and shorter-distance trail racing. 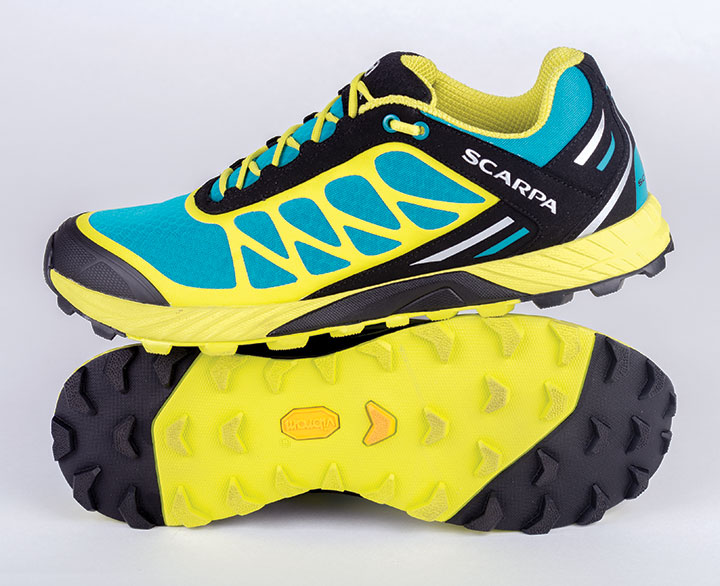 The most noticeable out-of-the-box feature of the Atom is comfort. A plush upper and wider fit make the shoe feel “like a built-up sock,” one tester wrote. On the trail, though, that forgiving upper became something of a liability. Lacking structure around the mid-foot and heel, the security of the fit was compromised.

It’s a flaw we hope Scarpa fixes, as the Atom—the lightest, nimblest shoe in the Italian company’s lineup—is otherwise well equipped for flowing over technical terrain. In particular, testers appreciated the ground feel and traction gained from the thin, flexible midsole and substantial Vibram lugs.

Fit: True to size, and wide throughout. 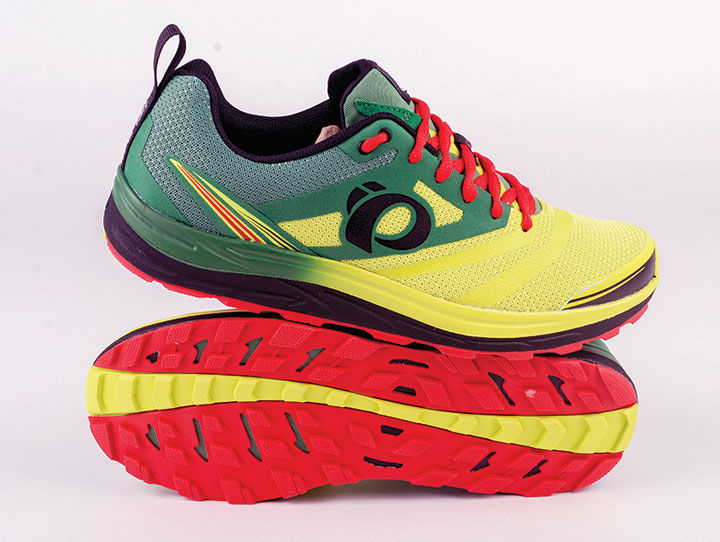 Cushioned and comfortable, the Trail N2 V3 proved especially popular for longer runs. A springy, rockered midsole offered a responsive ride, but with just enough give for serious distance, and the one-piece upper provided comfort described by different testers as “sock-like” and “slipper-like.” The all-purpose tread, comfortable on pavement, could handle dry or tacky trails, slabby rock and similar surfaces, though lacked the aggressiveness for slop, scree or steep, dusty inclines.

Testers who had run in the previous version, the N2 V2, thought this update actually took away from the shoe in a few key respects. In particular, the V3’s widened fit felt sloppy on rough terrain (even to wide-footed testers) and the greater space between lugs reduced traction on loose ground.

Fit: True to size or a bit big; extra wide in the toebox. 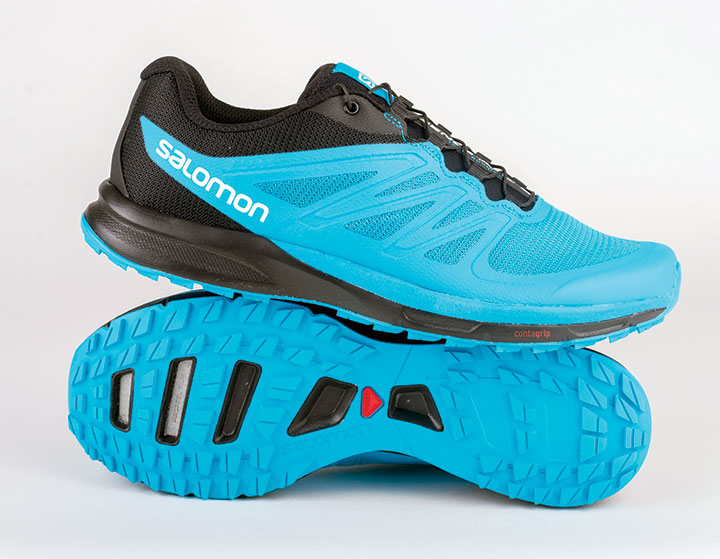 The Sense Pro 2 feels light and fast enough to race in, though it has enough cushion and support to function as an everyday trainer. The ride is firm but responsive, and the low, trapezoidal lugs are highly versatile: grippy on rock and steep climbs, reasonably smooth on pavement.

In particular, testers loved the secure but not constricting fit, dialed in by the stretchy inner liner around the mid-foot and supportive overlays; a wide toebox allows for toe splay and swelling.

Fit: True to size; secure in the mid-foot, with a wide toebox. 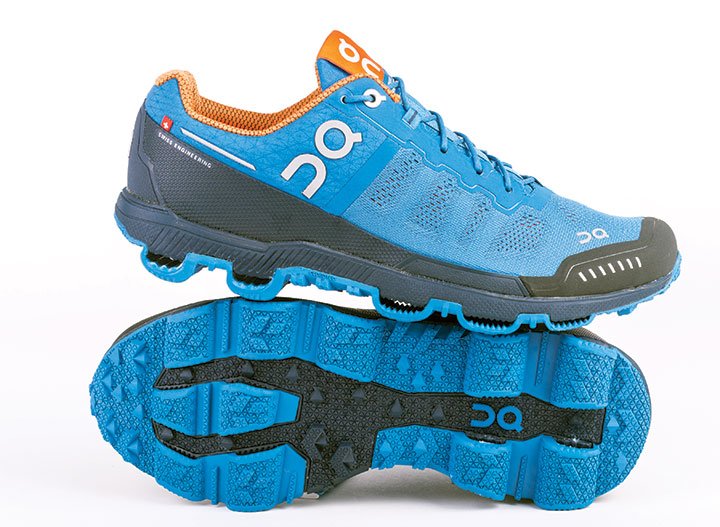 After trying the Cloudventure, the first trail shoe from the Swiss company On, testers were impressed by the overall design. In particular, the soft, seamless upper and rubberized heel pocket cradled the foot securely but comfortably, and breathed, drained and kept out debris effectively. The tread gripped well on all surfaces short of heavy mud, and the midsole struck the right balance of rigidity and flex for running fast on trails.

On differentiates itself with its unique outsole construction—a pattern of raised rubber pods that compress on impact for cushioning and energy return—and, ironically, testers had more mixed feelings about this signature technology. While they enjoyed the responsive ride, a few complained that the individual pods underfoot caused less precise landings on technical terrain, or collected debris in some situations.

Fit: About a half-size large; snug in the right places, with good room in the toebox.