The stories behind some of the craziest moments at this year's Hardrock 100. 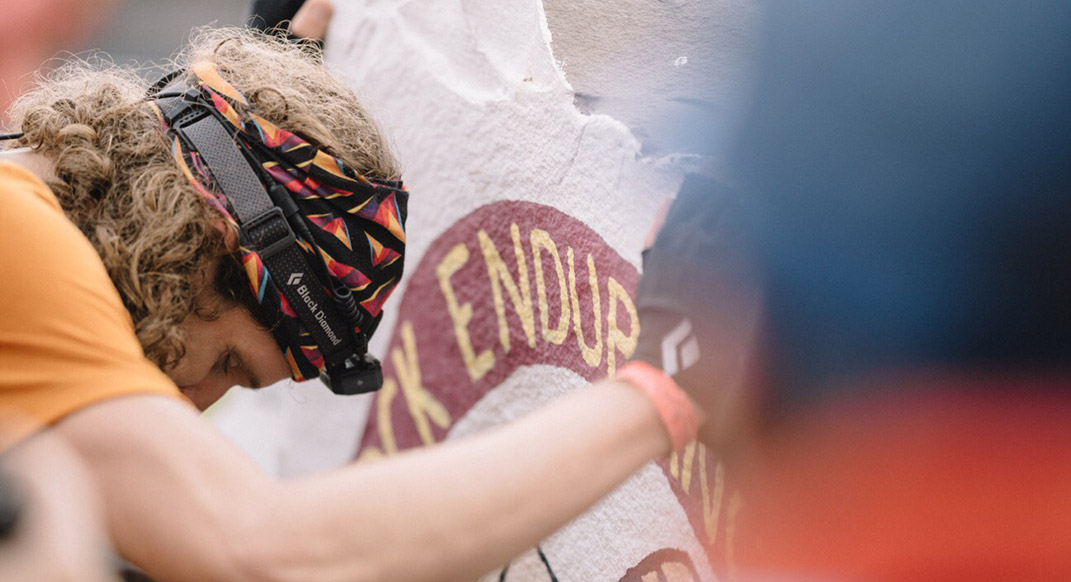 Joe Grant kisses the rock after coming in third place at the 2017 Hardrock Hundred. Photo by Steven Gnam.

Colorado’s Hardrock Hundred always seems to produce some of ultrarunning’s most unlikely and harrowing stories—like last year’s unusual first-place tie between Kilian Jornet and Jason Schlarb, or when, in 2014, Adam Campbell got struck by lightning on top of Handies Peak and still finished in third place.

In the rugged San Juan Mountains, the 2017 race—which saw Kilian Jornet, Mike Foote, Joe Grant, Caroline Chaverot, Darcy Piceu and Nathalie Mauclair on the podium—was no exception. The race kicked off with a hailstorm—”definitely the most adverse weather I’ve experienced in my three Hardrocks,” says second-place finisher Mike Foote—and would ultimately see epic injury-comeback stories in both the men’s and women’s races.

When updates came through that the 29-year-old Spaniard Kilian Jornet had fallen and dislocated his shoulder at mile 13, many wondered if the two-time defending champion would call it quits (his 2016 co-champion Jason Schlarb, of Durango, Colorado had already dropped, after coming down with a debilitating stomach bug).

“Most people would have dropped, and no one would have thought anything of it,” says Joe Grant, the Boulder, Colorado runner who finished third behind Jornet and Foote.

However, against expectations, Jornet continued on, with his arm in a sling, tucked into his racing vest.

“His shoulder was quite painful when he moved it, so he had to be more cautious on the downhills, but he … was OK when he was hiking uphill,” says Grant. “He is so strong that he’s able to operate at a much lower intensity, which is what allowed him to manage this type of injury and still win the race.”

Though Jornet’s finishing time of 24 hours 32 minutes 20 seconds was the slowest of his three finishes at Hardrock, the injury hardly seemed to faze him. “I offered to help him grab things from his pack when he was struggling to get them,” says Foote, of Missoula Montana, who also shared some miles with Jornet in the second half of the race. Jornet declined the offers, but did allow Foote’s pacer to help him zip up his jacket.

“It’s funny,” says Foote. “It’s this big race, but, in the moment, you are just trying to help each other out. We talked a lot on the climbs, and it felt oddly casual … like friends just hanging in the mountains.”

Related: The Happy, Hungry, Weary, Weathered Faces of the Hardrock 100

Caroline Chaverot has made a name for herself on the international trail-running circuit—in 2016 she won the Ultra-Trail du Mont-Blanc and was crowned IAU Trail World Champion and Skyrunning World Champion. Hardrock was the Franco-Swiss runner’s U.S. debut.

“This race is held in a wild and beautiful place, with a great atmosphere and a real history,” she says. “I thought it would be the perfect race to discover the American trail-running culture.”

From the gun, Chaverot ran aggressively, well ahead of course-record pace. “I kind of knew that [Caroline] would go out fast,” says Piceu, of Boulder, Colorado. “I didn’t think I would see her much based on how she went out in the beginning.”

Chaverot may well have set a new women’s course record, had she not gotten lost just before mile 70, below Virginius Pass. Volunteers at Kroger’s Canteen, an aid station famously located on top of the pass, watched in horror as her headlamp bobbed in circles for more than an hour and a half.

“The terrain is tricky down there—hanging ravines, headwalls and acres of talus and tundra,” says Roch Horton, who is captain of Kroger’s Canteen. “[She and her pacer] were going in circles, in and out of our view point. It must have been really frustrating to be so close, yet so far, from the course.”

Indeed, the episode sapped Chaverot of the positive attitude she’d carried for the first half of the race. “I lost a lot of energy sprinting through the bushes, scrambling up and down [over large talus],” she says.

In the frenzy to find her way back on course, she forgot to eat or drink. By the time she found the course again, she was “angry and disappointed and totally depressed.” The entire rest of the race was, she says, “a long low point.” Yet, despite broken poles and a cracked rib, Chaverot held off Piceu for the win.

On their way to a 1-2 finish, Kilian Jornet and Mike Foote shared a sip of mezcal at Kroger’s Canteen. Serving mezcal has been a tradition at Kroger’s for as long as aid captain Roch Horton can remember.

“The first year I volunteered up there, it was still called Kroger’s Cantina [somewhere over the years, the named changed to Kroger’s Canteen],” says Horton. “So we dressed up in cheap ponchos and sombreros and offered a tiny shot to anyone who would take it.

The tradition stuck, and each year Horton (who doesn’t drink) continues to offer up sips of liquor—”never enough to even cover Lincoln’s beard if you dropped a penny in the cup.”

All runners—even the race leaders—receive the same offer. “Even when in a hurry, [the leaders] find time to enjoy the experience,” says Horton. “As that cup comes back down—the pucker, the wincing smile—you can see right into their souls … and then off they go.”

Foote, who has finished Hardrock twice before, had never taken Horton up on his offer. This year, however, “it felt like the right time considering the circumstances,” he says. “I guess you could say culture trumped competitive desire in that moment.”

Adam Campbell Finishes One Year After a Near-Fatal Scrambling Accident

In 2014, Adam Campbell made headlines when he finished in third place after both he and his pacer had gotten struck by lightening on the top of Handies Peak. The Canadian runner returned the following year and earned third place again. However, this year, many weren’t sure he’d even make it to the start line.

Less than one year ago, Campbell suffered a 200-plus-foot fall down a talus-covered slope in the Canadian Rockies, which left him with broken T8-T11 vertebrae, a broken iliac crest (hip bone), a broken ankle, several foot fractures, torn ligaments and tendons and severe lacerations. Miraculously, Campbell survived. After several rounds of surgery, and several weeks in a wheelchair, he had to re-learn how to walk.

By December, he was starting to run again, and by May was running up to 80 miles a week.

“I visualized finishing [Hardrock] constantly,” he says. “But I also visualized the struggles I would likely face. I think too many people visualize perfect scenarios … and are then unprepared for the difficult patches. Success comes easy when you’re feeling good, but truly great performances come to those who have to figure out how to overcome adversity.”

On race morning, out of habit, he lined up at the front of the start line. He hung with the race leaders for a few miles, but by mile nine he couldn’t keep up. Crushed, he jogged along as the front pack cruised away, and began to cry.

“Anna Frost … ran past me, stopped, gave me a big hug and told me, ‘It’s OK, you have nothing to prove to anyone out here,'” he says. “Those words gave me permission to change my mindset.”

At every aid station, Campbell wrestled with the question of whether or not to drop. By Telluride, he had injured his bad ankle, and for the last 30 miles he walked. “It appeared like the finish kept moving farther and farther away from me,” he says. “I was stuck in some horrible ultrarunning nightmare, where you chase a never-approaching finish line.”

“Though Jornet’s finishing time of 24 hours 32 minutes 20 seconds was the slowest of his three finishes at Hardrock”
=> I believe Kilian has now won Hardrock four times, not three.