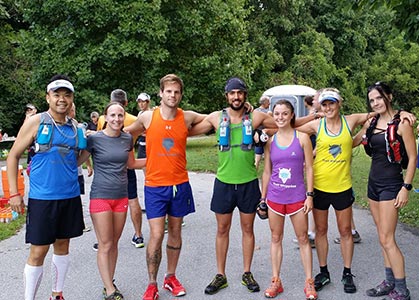 Two years ago, Dylan “Papa WhippAss” Armajani decided to run a marathon. He had never been a runner, but his father had recently suffered a stroke and he wanted to raise money and awareness for the American Stroke Association by running with charity organization Tedy’s Team. Realizing he was “sort of good at” running, he joined a road-running club but was put off by its hypercompetitive edge.

Then he ran a trail race. “I loved the vibe of the other runners and feeling in touch with nature,” says Armajani, 29, of New York City. “I loved how supportive everybody was … and how everybody was celebrated to the same level.” He promptly quit the road-running club.

On weekends, Armajani would run the area’s often-technical trails with friends, some of whom felt similar dissatisfaction with road-running culture. So they founded their own trail-running club. “We used to call trails that were gnarly and had lots of roots, rocks and elevation change ‘whip-ass trails,’” and the group named itself after that colorful descriptor, says Armajani. “However,” he adds, “I can’t spell, so I wrote it down as ‘Trail WhippAss,’ and it’s been that ever since.”

Runners from Trail WhippAss, which members also call T.W.A., regularly support one another at races around New York and New Jersey, as well as far-flung places like Leadville, Colorado. When Maggie Guterl, 34, of West Chester, Pennsylvania, was running the 100-mile Viaduct Trail Ultramarathon, Armajani and another member spent their weekend driving around to support Guterl. Guterl says that though she didn’t know the pair well at the time, “they showed up no questions asked.” 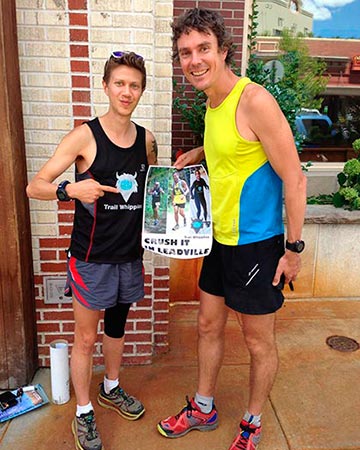 But T.W.A. is more than a group that meets up for runs and races, members say; it’s a collective devoted to celebrating the culture and community of trail running. The group hosts trail-running-themed movie nights—they recently screened Running the Edge, which documents ultrarunner Scott Jaime’s 2013 Colorado Trail FKT—and promotes local trail maintenance through its Trail WhippAss Cares program. Its runners race in variously colored silkscreen singlets that one member, an artist, prints by hand.

“We eat, sleep and breathe what we are all about, which is quite simply trail running,” says Guterl, whom Papa WhippAss crowned with a custom-made trucker hat after the Viaduct 100, an honor reserved for club members who claim the “badass” accomplishment of running 100 miles. “We have a sense of pride wearing WhippAss on our shirts [or] hats … We also curse like sailors.”

True to the vibe that attracted Armajani to the trail scene in the first place, Trail WhippAss emphasizes fun over fast times. “T.W.A. views success on how the runner felt at the end of the race and not how fast he or she was,” says member Shelby Hur, 44, a cardiothoracic physician’s assistant and self-described late-blooming runner. “Our motto is to run free and run careless.”

Befitting a club based in and around one of the world’s most international cities, T.W.A. embraces runners from well outside the New York City metropolitan area—Guterl lives on the far side of Philadelphia, over 100 miles from Manhattan—and even outside the country.

Earlier this fall, Juergen Englerth, 52, became the club’s first international officer. The German ultrarunner is working on developing the club’s website and “recruiting other badass trail runners from Germany to become WhippAsses.” He has also gotten the club recognized by the German Ultramarathon Association.

Englerth, a project manager for the German firm Allianz and Taekwondo instructor who splits his time between Munich and New Jersey, was introduced to Trail WhippAss at the 2013 New Jersey Ultra Festival, the club’s first official event. He developed close friendships with group members, whom he calls “great humans.” “You can be sure that when the fast runners finish their race, they will stay there to support the slower runners—whether they are WhippAsses or not.” 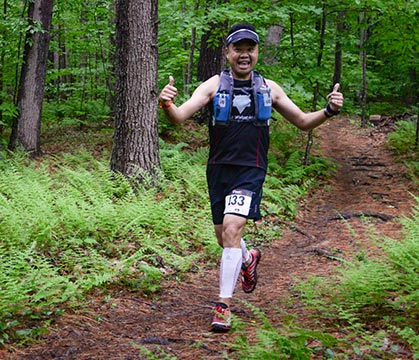 The dirt on Trail WhippAss:

>Favorite trails: The Watchung Reservation, a 1,959-acre forest preserve in Union County, New Jersey, is a favorite urban-adjacent T.W.A. getaway. A short but challenging run, the 4.5-mile Giant Stairs Loop in New Jersey’s Palisades Interstate Park incorporates steep climbs and rocky trails, but rewards runners with stunning views of the Hudson River. For wilder adventures, T.W.A. members have headed to the Shawagunk Ridge Trail, a 71-mile point-to-point that follows a scenic ridgeline through portions of New Jersey and New York State. And to get in shape for their adventures, some T.W.A.ers do hill repeats on the Mount Tammany Trail at the Delaware Water Gap.

>Post-run grub: Many T.W.A.ers are vegan, so group outings tend to involve vegan or vegetarian food, often washed down with a glass or two of red wine. Current vegan-friendly favorites include Candle Cafe and Peacefood Cafe, both in Manhattan.