On resisting temptation in ultrarunning 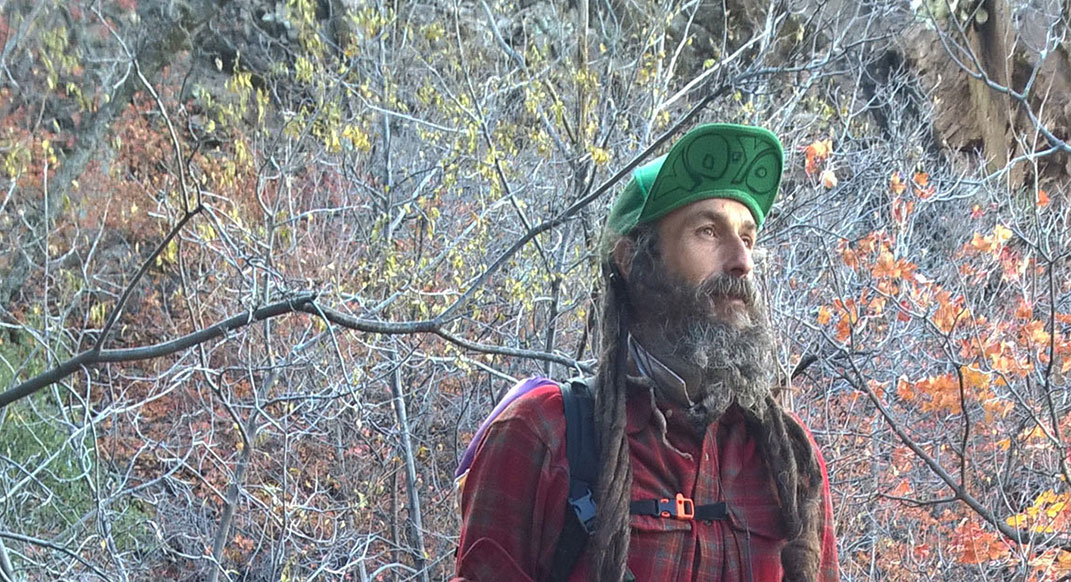 The author enjoys a peaceful moment on the trail. Photo by Kathy Vaughan/UltraPedestrian.com

“In running, lack of mindfulness results in tripping on the trail. In meditation, it results in getting distracted by a thought.”

– Sakyong Mipham, Running With the Mind of Meditation

More than 20 years ago, the abbot of a Greek Orthodox monastery on Mount Athos taught me more about endurance sports than anyone else ever has.

I’m sure he didn’t realize it at the time. He wasn’t a runner. In fact, I wasn’t even a runner myself at that point in my life. But his lesson resonated with me on a very deep level, and has helped me navigate numerous challenging, even dangerous, moments on later journeys both literal and figurative.

Here’s the story he told me:

A young novice monk approached his abbot and said, “Father, it seems like whenever I really focus on praying, an airplane flies overhead and distracts me. What can I do?”

The Abbot asked, “Is there anything you can do to stop the airplanes from flying overhead?”

The novice monk answered, “No.”

The Abbot responded, “That’s right. You can’t do anything to stop the airplanes from flying overhead. The trick is not to build an airport!”

This is a modern rendering of an even more ancient version involving birds. Regardless of the metaphor’s particulars, the Abbot’s point is that it’s okay to let the thoughts fly on through, so long as you don’t allow them to settle in permanently and make themselves at home.

In essence, he is saying that feeling temptation is an unavoidable condition of life; our responsibility lies in developing the skillset necessary to not give in to that temptation. And resisting temptation is the common ground between monasticism and endurance sports. Whether it’s an ultrarunner attempting to finish a 100-mile course before the cutoff or a thru-hiker tackling a 1,000-mile route in a single push, the challenge is not so much finding the will to continue on as resisting the temptation to give up. 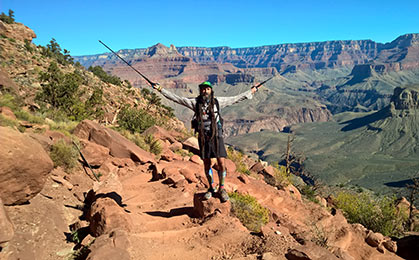 The author in the Grand Canyon. Photo by Kathy Vaughan/UltraPedestrian.com

In early August of 2014 I did a project I’d been planning for a year, the Unsupported Washington Traverse. My goal was to cross the state of Washington via the Pacific Crest Trail completely unsupported, receiving no outside help of any sort, picking up no food resupply along the way, dropping off no trash. In other words, carrying everything I would need, including all my food, from the very beginning, and hauling all my trash until the very end. In addition, I would get my water only from natural sources.

Included in my unsupported ethic was the stricture that I only eat what I had carried, not foraging or accepting any sort of handout or “trail magic”—food that kind people (“trail angels”) leave out for thru-hikers.

At one point, this presented a unique challenge to my unsupported ethic. On the section of the PCT south of Snoqualmie Pass is a 10-plus-mile dry stretch with no water sources on the trail. I had passed up the last spur trail that led to water, thinking that I had enough to push through. I had also seen a few small creeks on my GPS that I hoped would be running.

They weren’t. I ran out of water. My gear was still wet from heavy rains the night before, but my throat was dry. Then I crossed a dirt road and came face to face with temptation. There, some kind trail angel had put out jugs of water, chairs and a beverage cooler. I opened the lid of the cooler and just stared, amazed at all the soda. There must have been at least 75 cans: grape soda, orange soda, cola.

I immediately formulated a plan: I would drink one can of each flavor, then put another of each in my pack for later. That would be over 1,000 calories that I sorely needed, plus fluids and flavor that I desperately wanted. I stood there for a moment just staring into the cooler at that wealth of refreshment, watching drops of condensation drip from one can to the next, running over purple, orange and brown graphics that described the pleasures contained therein.

I imagined myself popping three open in a row and downing them all: crack! guzzle guzzle, belch, repeat. I pictured myself pulling three more cans out of my pack a couple of hours later to repeat the refreshing ritual, knowing the calories would revive me physically and the sheer indulgence of it would revive me mentally. And there was no one around. I could cheat just that little bit, and no one would be the wiser.

But I would know. I slowly closed the lid to the cooler and went on my way. My overall goal was far more valuable to me than a few moments of carbonated bliss and a couple hours of increased energy. My two water bottles were empty and had been for six or seven miles, but I knew there was a spring just a couple of miles away. Fantasizing about drinking the soda was almost as good as actually doing it, and just that little mental indulgence made it easier for me to walk away from all those free calories without having violated the ethics of my attempt.

It occurred to me at that moment that adventuring is a spiritual struggle similar to monasticism. The temptation of the flesh that we must face is the temptation to stop, to quit, to take the easy way out. Like monks, endurance athletes of all stripes choose a challenging path and take on difficulties of their own free will, when most of human society is in pursuit of ease. We strive to overcome elective hardships because we know there are ineffable blessings in so doing, even if we find it impossible to articulate those rewards to the mass of humanity.

Ras and his wife, Kathy, write about their adventures at UltraPedestrian.com.