The two American runners both claimed victory in a race typically dominated by Europeans. 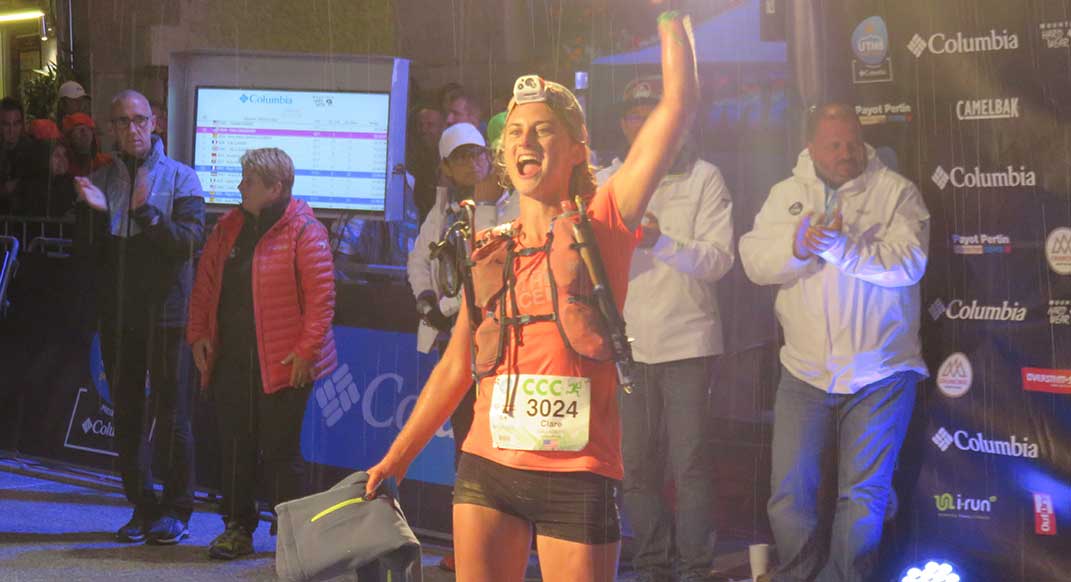 Gallagher celebrates at the finish of the 2017 CCC, Chamonix, France. Photo by Mike Gallagher

Last weekend, on September 1, Hayden Hawks and Clare Gallagher claimed big victories at the CCC, a 100K race around part of the Mont Blanc massif in Italy, Switzerland and France. Only one other American male had won the CCC—Zach Miller, in 2015—and no American woman had ever done so.

The victories came amid a weekend of strong finishes for American runners at the Ultra-Trail du Mont-Blanc race series, which features five races between 50K and 230K around the Mont-Blanc massif in Switzerland, Italy and France. Four American runners finished in the top 10 at the series’ flagship 105-mile race, UTMB, two of whom went under the previous course record.

Both Hawks and Gallagher are relative newcomers to the trail-racing scene, having only been at the top of the sport for the last two years.

Gallagher, 25, of Boulder, Colorado, burst onto the scene last summer with a win at Colorado’s Leadville 100, and earned a golden ticket to the Western States 100 with a second-place finish at Arizona’s Black Canyon 100K.

She was a hopeful for the top spot at the competitive California 100 in June—and ran in podium position for most of the race—until a knee injury derailed her race just 15 miles from the finish. Her left leg locked up and she crawled for four miles before eventually dropping at mile 93.

Fortunately, the injury turned out to be a Baker’s cyst, which went away on its own after a few weeks. Within two weeks, Gallagher was back running. Drained from the experience, she “spent a month getting very little sleep, staying out late with friends and living life pretty hard. By this I mean long weekends in the mountains with lots of running, drinking more margaritas and coffee than water and not caring about training other than doing what felt fun and right.”

As it turned out, the strategy worked, and by July she says she was in “the best shape of my life.” The next two months were spent focusing on less mileage with more speed work and a short few tune-up races, to allow ample recovery time.

Come race day she says she felt, “Super calm, ready and amped as shit.” She took the first climb out hard, and then settled in just behind Spanish runner Maite Maiora Elizondo. Gallagher took the lead about 50K into the race. It was a close lead, though.

On the muddy descent into Vallorcine, the final aid station, Gallagher slipped six times. By the time she had gotten through the aid station, her lead had dwindled to just three minutes.

“I dug to a very dark place, accepting that I would be fighting hard until the end,” she says. Heading up the final climb, she was running so hard she could hardly swallow. “I ran every single step that I physically could, making it as hard as possible for her to catch me.”

Not realizing that she’d built back a sizeable lead, she hammered the last downhill and final few hundred meters through downtown Chamonix to the finish. She ultimately crossed the line in 12 hours 13 minutes 57 seconds, roughly 13 minutes ahead of Elizondo, and setting a new course record for women.

“Leadville changed my life,” she says. “But winning CCC on a huge and extremely competitive international stage validates my future. I know I can hang with the big girls, and I want to do this for as long as I can.”

Like Gallagher, Hawks came to CCC on the heels of a disappointing spring, which saw him finish 77th at the Transvulcania and 81st at the IAU World Trail-Running Championships.

“I made a common mistake of over-racing this spring,” he says. “I ran six ultramarathons and that was just too much with not a solid training block.”

Hawks, who started racing trails just last year, has had success at the 50K and 50-mile distances, including podium finishes at the Speedgoat 50K, North Face Endurance Challenge 50 San Francisco and Chuckanut 50K.

This was his first 100K, and his first race longer than six hours. “I wanted to debut at 100K on the biggest stage,” he says.

For the first 15 miles, Hawks ran conservatively, chatting with friends. At Refugio Bonatti, a drink station 22 miles in, he surged and caught up with the lead pack.

“Once I caught them I kept moving forward and never let up,” he says. “I felt very comfortable, and was thinking that it was just another long run in these beautiful mountains.”

Last year’s UTMB champ Ludovic Pommeret of France stuck with Hawks for a handful of miles, but by 55K Hawks was able to create a gap, which he maintained for the rest of the race. Even as he ran alone off the front of the pack, Hawks says his pace was “comfortable,” with virtually no low points.

“There were a lot of highs in the race,” he says. “The mountains were high, the competition was high, I was high on life and felt great! It honestly was a perfect day.”

Marcin Swierc is Polish and pretty proud of it. I don’t think he would be happy being called a “Frenchman”.