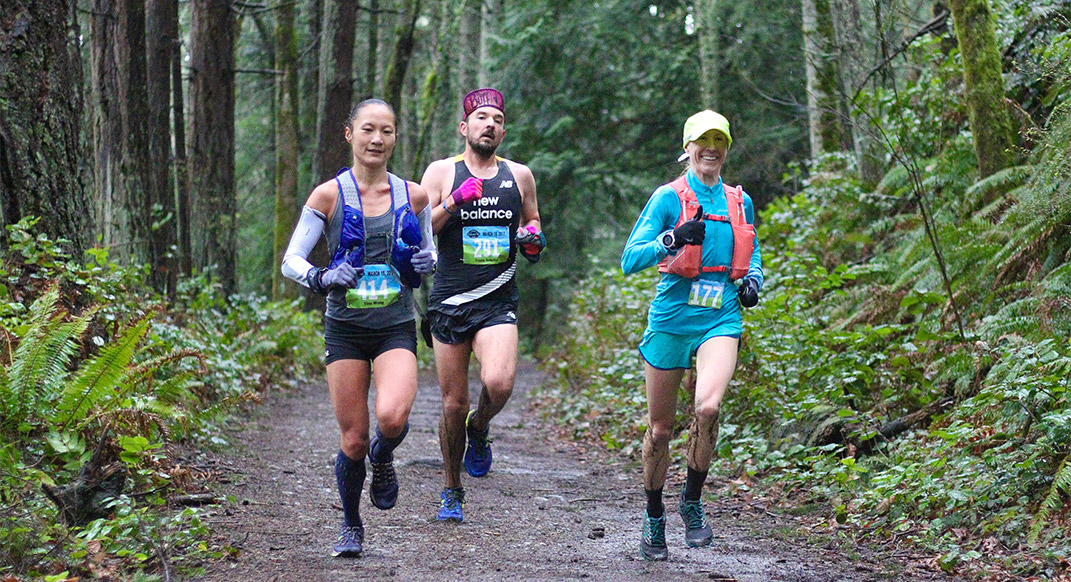 Going into the Chuckanut 50K on Saturday, Ladia Albertson-Junkans had two strategic aims: Don’t go out too fast, and run your own race.

“I didn’t really follow through on my first goal,” she says.

Enjoying the company of fellow competitor YiOu Wang, Albertson-Junkans stuck with her for the first several miles and ran 15 to 30 seconds per mile faster than planned.

But having fun was a goal in itself, and, anyway, it worked out in the end. Despite some painful miles at the end, Albertson-Junkans, 31, of Seattle, held off a strong field to win in 4 hours 17 minutes.

It was her first race longer than 25K.

Cross-Country to the High Country

Albertson-Junkans was raised in Minnesota, where she ran competitively in high school. “I grew up really loving cross country,” she says. “I kind of always gravitated toward off the roads and off the track.”

She continued her career at the University of Minnesota, earning two All-American honors. Later, she took her speed to the roads and won a couple of half-marathons.

But cross country remained her first love, and she soon became interested in other forms of off-road running.

“I was itching to try something very different than the more structured, regimented styles of road racing and track racing,” she says.

Since 2014, Albertson-Junkans has racked up three wins and three additional podium finishes at half-marathon and 25K trail races. She finished sixth at the U.S. Mountain Running Championships in 2015, then came in fourth last year, making the national World Championships squad.

Instead, she prefers room “to give myself permission to say on any given day, ‘I’m either really gonna dial it back today, or maybe I’m gonna push it a little harder.’

“I care enough about running that I want to do the best job possible,” she says. “If I have something planned and then I can’t do it, it feels more like a mental stressor.”

After a decade and a half of running, she says she knows her body well enough to take this kind of “day-by-day,” “running-by-feel” philosophy.

In turn, that has allowed her to train effectively while maintaining a healthy balance between her job at a health-research institute, relationships, running and other interests, like skiing.

“I’m dedicated but not necessarily structured or regimented in my approach,” she adds.

That might mean tracking time rather than mileage, or skipping a run after a particularly stressful workday, or heading out for a 20-mile adventure in the mountains at a casual pace.

It was one such outing that helped encourage Albertson-Junkans to try her hand at ultras. Last summer, she and some friends spent a weekend running around two iconic volcanoes, mounts Hood and St. Helens. At 75 miles, it topped the distance she would run in a typical training week.

She enjoyed the longer distance, and decided to try an ultra. It “just felt like the natural next step in terms of exploring all that trail running has to offer,” she says.

Chuckanut seemed a near-perfect venue to try the ultra distance. It was easy to get to from Seattle, Albertson-Junkans had trained on its trails and a friend had raved about the experience.

Since moving to Seattle a few years earlier, Albertson-Junkans had made a habit of getting out for long, rambling mountain adventures on the weekends. Leading up to Chuckanut, she shifted to more focused long runs, and nudged her mileage up overall.

“I knew I that I could move all day if needed,” she says. “What I was worried about was being able to move at a high effort level and fuel properly.”

A lollipop format, Chuckanut’s course resembles a tough mountain 30K sandwiched between two fast 10Ks. After the brisk start with Wang, Albertson-Junkans pulled away from the other lead women on the first big climb.

Though feeling strong after all her mountain adventures, she expected Wang and Camille Herron, another top contender, to catch up on an upcoming technical section or descent.

But that was the last she saw of them.

Reflecting on her execution, Albertson-Junkans notes a few minor mishaps. On the last long downhill, she ran hard and trashed her quads.

Stomach issues kept her from eating enough in the race’s second half, an issue she attributes to having missed a key, scheduled 24-mile-long training run due to illness.

Aching quads, missing calories and the effects of her fast early pace contributed to a rough final leg.

“I knew that I could explode at any point,” she says. “Thankfully, I got to the finish line before that happened.”

“Watching Ladia’s blond ponytail … sprint through aid station number one, and then cruise into our finish line was the first I’d heard of that spunky little runner,” says race director Krissy Moehl. “She seemed to fly!”

“It was such a strong field,” Albertson-Junkans says. “I certainly did not expect to win.”

Next, Albertson-Junkans will race the U.S. Mountain Running Championships in June. One week later, she’ll travel to the IAU World Trail Championships in Italy, a privilege she earned with her Chuckanut finish.

Don’t look for her at Western States anytime soon, though. “I think the 50K is a good new challenge for me,” she says. “I will work on this for a little while before exploring the next thing.”