Two other runners rescued after three days on the mountain; race organization is mired in controversy over what went wrong 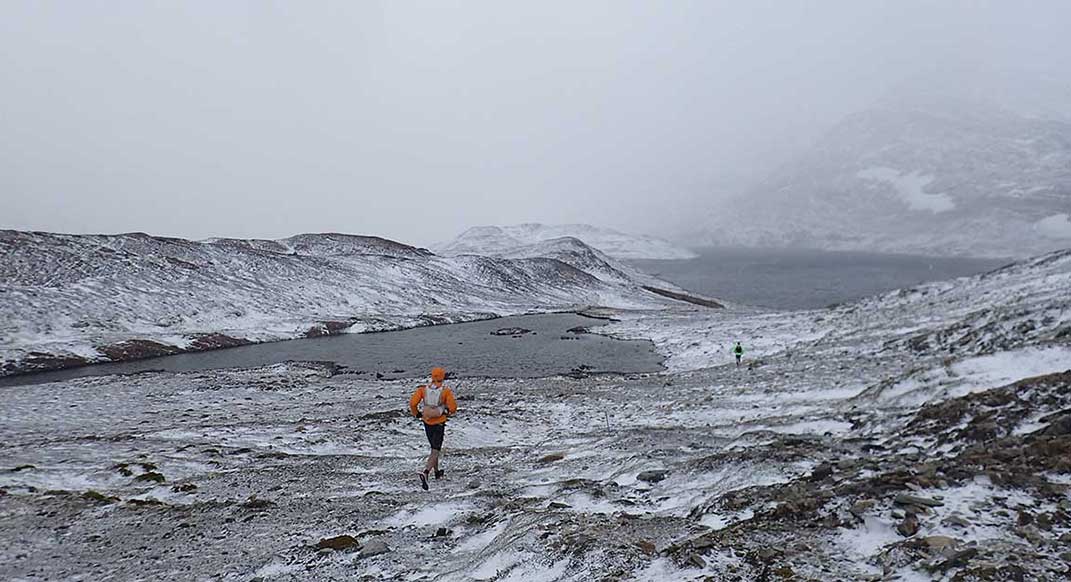 Runners crossing the high point of the 2016 Ultra Fiord in the Chacabuco Valley in Chilean Patagonia. Photo by Yitka Winn

Last weekend, April 15-16, 2016, experienced Mexican runner Arturo Héctor Martínez Rueda passed away during the second edition of Ultra Fiord, a mountain race in southern Chilean Patagonia. The official cause of death has not yet been confirmed, but is presumed to be hypothermia. Martínez Rueda was 57 years old.

According to an official statement released yesterday by the race organization, Nomads International Group (NIGSA), Martínez Rueda’s body was found near the 65-kilometer point of the 141-kilometer course. This point sits high in the Chacabuco mountains, about 2,800 feet (850 meters) above sea level—which, at this southern latitude, lies well above treeline in an exposed, glacial basin. The area saw heavy snow, sleet and winds over the weekend.

Due to severe weather all over the region, local police and rescue organizations were unable to retrieve Martínez Rueda’s body immediately. For the last two days, teams have been camped out up high awaiting a break in the weather. Today, April 19, the special-operations police force, GOPE Carabineros de Chile, was finally able to retrieve his body off the mountain, according to Radio Polar. La Prensa Austral stated that he was found buried under more than three feet of snow. 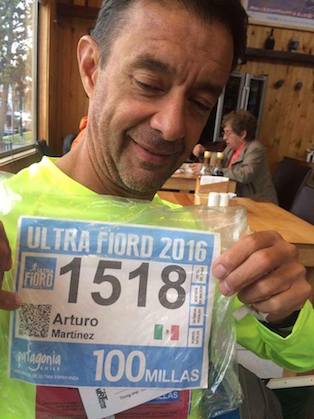 This photo of Martínez Rueda, taken before the race, has been shared widely on Facebook.

Martínez Rueda reportedly stopped running between two checkpoints of the race that were spaced approximately three miles apart. Notably, the race course between these checkpoints, though very well marked, was slow going for many runners due to high winds and technical footing across snow-coated scree fields. It is unknown at exactly what time on Saturday the race organization was alerted to the situation and able to begin mobilizing rescue efforts.

Though many details are still unknown, NIGSA has come under immense fire on social media as many runners have accused the organization of being negligent, not providing on-course medical personnel as frequently as promised, and failing to respond promptly enough to the crisis.

NIGSA told Trail Runner it couldn’t comment any further until more aspects of the situation have been confirmed.

The inaugural Ultra Fiord race last year brought about a number of harsh criticisms as well from experienced mountain runners who felt that the course was unnecessarily dangerous, and that runners had not been educated significantly enough ahead of time on the risks.

The morning before the scheduled 10 p.m. start last Thursday, April 14, of the Ultra Fiord 100-mile race, NIGSA announced that due to severe weather forecasted in the area, runners would compete on a shortened, modified course. The altered course would avoid a higher (4,100 feet, or 1,250 meters), technical glacier crossing that was part of the original 100-miler course, as well as the 100K and 70K courses. (The race also includes 50K and 30K options.) So extreme was the original course’s terrain that crampons, trekking poles and a climbing helmet were all included on the race’s list of “highly recommended” gear.

Included on the mandatory gear list—enumerated on the website, though not officially checked by any race personnel before or during the race—were a number of other items such as a synthetic insulated jacket of at least 130 grams, waterproof jacket with hood, emergency survival blanket, basic first-aid kit, long-sleeved shirt, long pants, warm hat and warm gloves.

As part of the last-minute course modification, 100-mile runners were rerouted to an 88-mile alternate route topping out at 2,838 feet (865 meters)—the area where Martínez Rueda ultimately perished. 100K, 70K and 50K runners all crossed over the same high mountain pass on their routes, while 30K runners traversed a lower, less technical section of the course.

A number of runners expressed disappointment in the hours leading up to the race start about not being permitted to run the full, original course. However, many also expressed gratitude toward NIGSA for making a preemptive, safety-oriented decision.

The 100-mile runners took off from the start line at Estancia El Kark at 11:59 p.m. local time on April 14 in clear, cool, mild weather. Some six or seven hours into the race, the weather began deteriorating. Throughout the next day, weather fluctuated between moments of clear or cloudy weather and stretches of freezing rain, snow, sleet and high winds on the more exposed sections.

As reported by Radio Polar, two other competitors in the 50K Ultra Fiord race—Micaela Schrinian of Argentina and Eliane De Souza of Brazil—were stranded during the race as well, unable to descend off the mountain pass due to severe weather. They camped out with local personnel for three days in the range before hiking out six hours and being picked up by by GOPE Carabineros de Chile and brought back to Puerto Natales, the nearest town and race weekend headquarters. They are reported to be in good condition.

Controversy Over the Race Organization

Late Saturday morning, April 16, rumors of an accident during the race began floating around Puerto Natales. Much remained hearsay in the early hours, and NIGSA did not respond to several comments posted to the Ultra Fiord Facebook page requesting updates on various runners, including Martínez Rueda.

Due to the severe weather that led to unreadable signals, the planned live tracking online (via LiveTrail) was updated sporadically at best—a point NIGSA acknowledged and apologized for on Facebook during the race, reassuring concerned friends and family trying to track the race from afar that “the lack of LiveTracking DOES NOT equate to a more unsafe race as our crew is communicating round the clock internally, as we would normally do, to monitor and ensure the safety of runners.”

For many runners, the first word they got of the incident was during the Saturday evening awards ceremony in Puerto Natales. Addressing the crowd in Spanish, race director Stjepan Pavicic explained that Martínez Rueda had gone missing during the race, and asked the audience for a moment of silence on his behalf.

Shortly after, several members of the audience spoke out, vehemently criticizing the race organization for its laissez-faire security procedures and lack of trained medical personnel that NIGSA promised would be available along the course. Other runners in the audience spoke up to defend the race organization, citing the fact that the race readily identifies itself as a semi-autonomous, minimally supported mountain race with hostile weather and a number of remote sections not easily accessible for medical or rescue personnel.

In the last few days, many members of the international trail-running community have taken to social media to discuss what’s happened. Some misinformation and other details lacking context have been shared, including the implication that this is the second time the race organization has been at fault for a runner’s death. (Indeed, a young Argentinian runner, Jonathan Canto, died last October at one of NIGSA’s other Patagonian races, the Ultra Trail Torres del Paine; however, he suffered a heart attack during the race, so his death was not the result of any negligence on the race organization’s part.) Unfortunately, a number of comments originally posted to the Ultra Fiord Facebook page appear to have been hidden from public view in the past few days.

NIGSA released a public statement on Facebook yesterday saying, “The race organiser takes responsibility and apologise [sic] for the poor communications to the outside world with regards to this tragic incident, simply because it is a step we could not execute without the confirmation of the status and private communications with Arturo’s family. In this difficult time, the organising team sincerely expresses its condolences to the family and friends of Arturo and ask followers for your cooperation to send peace and respect to them too.”

This is still a developing story. We will update it if and when we receive new information.