A perfect training cycle, more rest days and a positive attitude led the Midwestern wonder to an outstanding day 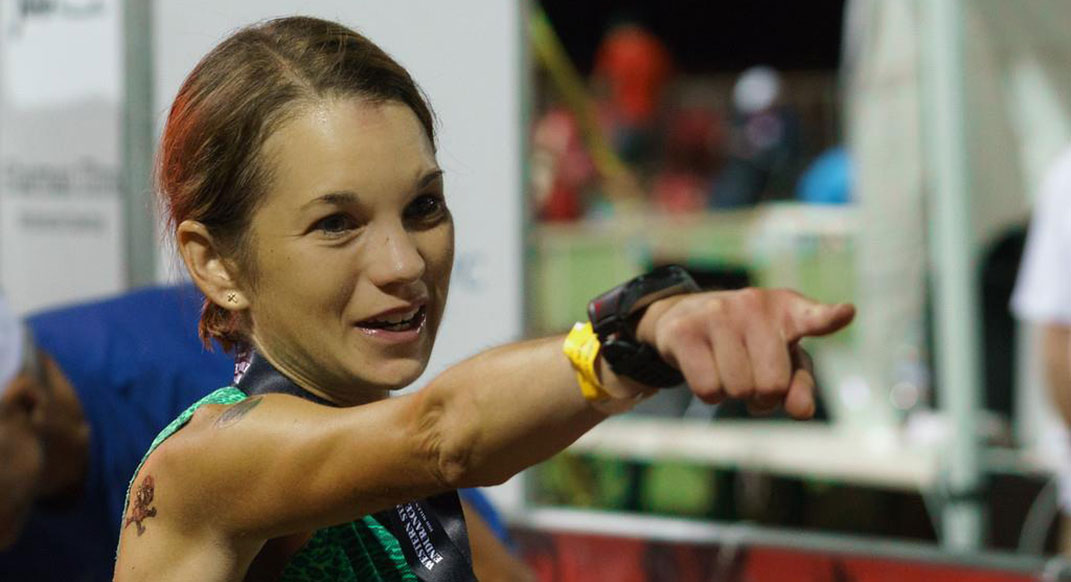 So when Kaci Lickteig, who lives and trains in pancake-flat Omaha, Nebraska, found herself leading the women’s field, she was shocked.

“I expected to be blown away by all the incredible mountain runners,” says Lickteig, 29. “I had envisioned sitting in fifth to eighth place until Robinson Flat [mile 29.7] or later.”

Yet, aided by an early falter by defending champ Magdalena Boulet (who would drop at mile 16 with stomach issues), and perhaps running stronger than she gave herself credit for – she was runner-up at WS100 last year, after all – the diminutive Lickteig, nicknamed the “Pixie Ninja,” was up front from the very beginning, running alongside Devon Yanko in the early miles.

“We both kept asking each other, ‘Are we really leading?’” she says. “However, we felt comfortable and enjoyed the trail together, singing Lion King songs and just enjoying getting to know each other better. It made the miles fly by.”

“Your Race to Lose”

And fly by they did for Lickteig, who would hold that lead the rest of the way to win the storied 100-mile trail race from Squaw Valley to Auburn, California, in 17:57:59 – nearly an hour ahead of runner-up Amy Sproston. (Yanko finished third, in 19:10:08.)

Lickteig says her race went exceptionally well, to the extent that she only had one low point – a short one, at that – over the course of 100 miles.

“I came out of Foresthill [mile 62] with my pacer Miguel [Ordorica], and we were just running along when suddenly my stomach started feeling nauseated,” she says. “So we walked and jogged for a bit, then I decided that I needed to stop and just bend over at the waist. I stood back up and had a couple burps and suddenly felt back to normal.”

She was running scared, to an extent.

“I thought about the women behind me, thinking at any moment they would be catching me, but didn’t let that put any paralyzing fear in me,” she says. “Rather I kept telling myself, ‘You are in the lead, it is now your race to lose.’ That kept me fired up.” 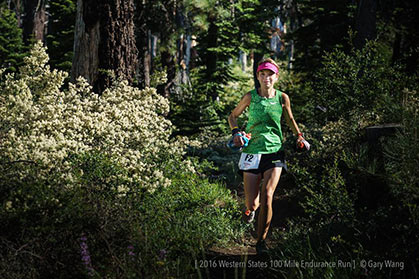 To set herself up for that dream, Lickteig says she set four goals ahead of the race with her coach, Jason Koop of Carmichael Training Systems:

1)   Eliminate problems before they start; if they do appear, stay calm and adapt.

2)   Run her own pace; Lickteig says she expected to chase the lead most of the day.

3)   Manage the heat in the canyons. “That by far has been my worst section each year,” she says. “I [planned] to double-fist [waterbottles] and to keep cool with a hat, ice and bandana.”

Under Koop’s guidance, the main focuses of Lickteig’s training were steady state runs at tempo pace; seeking out vertical gain and loss on the trails of a nearby nature center for her weekend long runs; and making easy days easy enough to fully recover.

“The biggest difference with this cycle [compared to previous training cycles] was that I had no injuries or times where I had to essentially stop training,” she says. “I was diligent on maintaining a balance with rest, taking more days completely off, getting adequate sleep and keeping on top of my nutrition.”

“Ironically, the total workload she was able to achieve was bigger compared to last year because she was just simply running faster and more consistently,” says Koop of Lickteig’s rest days.

But he also said her “smile, smile, smile some more” mantra was not an afterthought.

“The attitude was [the biggest] part of the plan,” Koop says. “There were no splits or time checks or be in such-and-such place or overcomplicated spreadsheets as part of the race plan. The whole thing was to focus on her attitude and emotions and to be relaxed and have fun early in the day.”

He emphasized that this was something Lickteig developed, as she knows herself and how to manage her races. “So most of the time, I just stay out of the way and let her do her thing because it works,” he continues. “In fact, when I learned she was first up the Escarpment, something most would cringe at [for going too hard too early], the only thing I could think was, ‘I bet she is having fun.'” 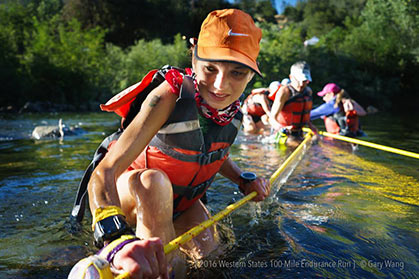 Keeping up the cheer at the mile 78 crossing of the American River. Photo by Gary Wang

“The Best Day of the Year”

As the hours and miles wore on, Lickteig had a seemingly permanent smile affixed to her face, but she was hardly zoned out.

“My mind was focused on constantly analyzing how my body was doing,” she says. “Did I need fluid, calories, ice, etc.? I wanted to stay on top of everything in order to avoid crashing.”

Through that focus, though, she was able to soak in the moment. “Otherwise, my thoughts were happy, thinking how fortunate I was, running on the trail of legends, and how this is the day I have waited for,” she says. “That’s why I couldn’t stop smiling.”

That smile grew larger when she thought, for the first time all day, that she might actually win the race.

“I never thought I was actually going to win until I hit No Hands Bridge [three and a half miles from the finish],” she says. “I never count my chickens before they hatch. That is when I saw [Koop] and my crew, Chris and Kristina, and gave them big hugs and started to tear up.”

As she alluded to earlier, winning WS100 was the fulfillment of a longtime dream for Lickteig, and she executed a nearly perfect race to pull it off.

“I am still sinking in the feeling,” she says. “I have such respect and gratitude for this race and the history of it, it still sometimes feels like a dream. This race means more to me than any race I have ever run.”

After a stop at Utah’s The Bear 100 in September to earn a Hardrock 100 qualifier, Lickteig says she will be back at Western, toeing the line in Squaw in 2017.

“I will be there every year that I can, whether running, volunteering or pacing and crewing,” she says. “It’s the best day of the year.”

Related: How Chris Mocko adjusted his training to finish 7th at Western, his debut 100-miler