Hicks talked about the adventure, training for epic mountain runs and environmental responsibility in the alpine 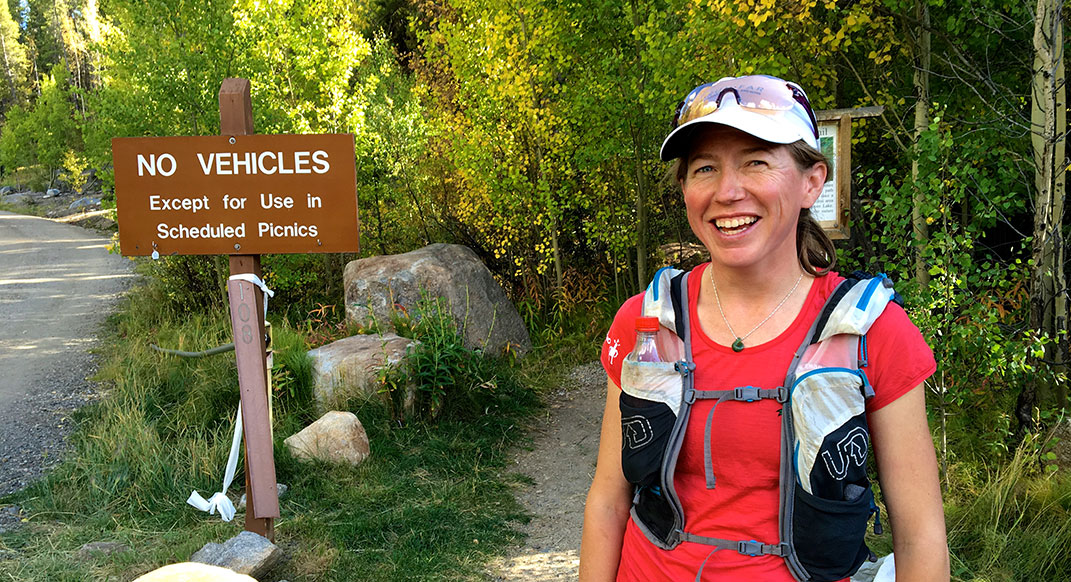 Meghan Hicks at the Fish Hatchery outside Leadville, Colorado, the endpoint of her successful Nolan's 14 attempt. Photo by iRunFar/Bryon Powell

When Meghan Hicks descended her 14th and final 14er of the weekend, late Sunday afternoon, she became the first woman to finish the mountain run known as Nolan’s 14, trailhead to trailhead.

The peak-hopping logic of the line, as well as its beauty and sheer challenge, have proven alluring to a trickle of ultrarunners over the past decade and a half.

“I love the Sawatch Range and have been visiting it now and again for a couple decades,” Hicks says. “They are an aesthetic range with real backcountry, despite being pretty close to big civilization.”

Hicks is either the 17th or 14th known finisher to date. There has been some debate over whether the 60-hour cutoff applies to the final summit or the final trailhead.

During an attempt last year, the ultrarunners Missy Gosney and Anna Frost stopped the clock before the final descent. They were the first women to reach the 14th summit of Nolan’s in under 60 hours, but some questioned whether that counted as a “finish.”

Hicks reached her 14th summit in 57:18 and the final trailhead in 59:36, making her the owner of the fastest known times for both endpoints.

Hicks, 38, is the senior editor of iRunFar, co-author of Where the Road Ends: A Guide to Trail Running and a contributing editor at Trail Runner. Her impressive ultrarunning resume includes two finishes at the Hardrock 100, five at Morocco’s 250K stage race Marathon des Sables and numerous other trail ultras.

A few days after finishing, Hicks shared her thoughts on the adventure, how she prepared for it and the environmental responsibility runners have when traveling off trail for something like Nolan’s.

Last summer, I spent quite a few weeks in the Sawatch. Bryon Powell and I were writing the last couple chapters of Where the Road Ends, and I needed a place to quasi-detach and focus on the book. Mornings on the Nolan’s line and afternoons and evenings writing at a tucked-away campsite was a soothing existence.

I came back to the Sawatch almost immediately after running Hardrock this year, and found that I was getting PR times on some of the Nolan’s lines. When I saw that Nolan’s was coming easier to me—PR times are not just about fitness but also about navigation, picking your lines and the ability to move over big boulders and variable terrain—I got real fiery and passionate.

How’d you train for Nolan’s?

Basically, I’d get up a 14er—and sometimes link up two of them—every other day. Some days I intentionally took those climbs real leisurely, and some days I tempo’d the climbs as a workout.

The downhills I almost always worked. I am not naturally a fantastic downhill runner, but I am malleable. I found that concentrated downhill efforts on the Nolan’s terrain proved rewarding. I was improving some of my downhill splits by 25 to 30 percent in a couple weeks.

I had a great aerobic engine and legs firmed up for whatever kind of vert I wanted to do because of a great training bout prior to Hardrock, so I used that platform to hone the specific needs of Nolan’s—developing aerobic capacity at 13 to 14,000 feet altitude and motoring around the technical terrain.

How much scouting had you done on the route beforehand?

I scouted the shit out of the Nolan’s 14 route!

I am not as physically talented as all of the other Nolan’s finishers, so I knew I needed to control some specific variables that I have seen chew into others’ outings.

One of those was navigation. I was obsessive in my scouting. Some lines I practiced four times just this year, trying slightly different variations to see if one route was faster or better for me.

Nolan’s can be run in either direction. Was going south to north a strategic choice?

Definitely strategic. In that direction, you hit what I perceive as the most remote and challenging terrain in the outing’s first half: Big Daddy Princeton, tedious Yale, the lumpy Columbia-Harvard traverse and the remote Pine Creek drainage.

Also, once you get to peak 10 in the south-to-north direction, you can be crewed before and after each peak, which means you can carry less stuff.

All of my estimated splits added up to 60 hours 30 minutes. As long as I could keep coming in a bit under my splits, I thought I had a chance!

The substrate on which you’re descending when you’re off trail in the Sawatch can vary a ton in taking just a slightly different line, and whatever that substrate is can be really fast or really slow. I’d done my Princeton—peak 4—descent twice in training this year, but descended 25 minutes faster during my attempt than I did in training—I picked a line I’d probably never be able to find again.

In terms of where I lost time, my Yale split was off. My pacer for that section got sick, and we had to move a bit slower than I would have liked.

Next, I got to the Columbia-Harvard traverse about 60 minutes before sunrise on Saturday. It’s a hob-glob of minivan-sized boulders for about a mile at the bottom of the traverse where it really helps to stop, look at the boulder array in front of you, see the general direction you want to go and pick the next four rocks you’re going to jump to. I flailed around this way and that on those boulders until I could see the longer view.

Then I miscalculated my La Plata—peak 12—ascent split by about a half hour, I think because I didn’t add in the couple miles of jeep-road running you have to do on the approach.

These three mishaps meant that all the time I’d gained on my splits was gone and I was sitting at the base of Elbert—peak 13—right on 60-hour pace. And I had just spent the La Plata ascent puking and the descent unsuccessfully trying to get any calories back in.

So, I’m looking up at the last two climbs, already in about seven or eight hours of caloric deficit, knowing I have to hit my splits precisely for the next 12 hours to finish on deadline.

I briefly considered quitting. I wasn’t sure that I could deal with finishing over 60 hours after working as hard as I had for so long. I was also terribly nauseous and sleepy. I lay down on the trail for five minutes, thinking I wanted to take a short nap and feeling really down on myself.

But as I lay there, instead of sleeping, I just kept thinking, “How bad do you want this?” And something fired right up inside of me. I decided I really wanted it. I wanted it badly. I got up off the ground and kept going.

My support team was incredible. Bryon Powell paced me over several mountains and was my crewing powerhouse. He’s indefatigable—I think he might be able to beat out a Border Collie in his perpetual energy.

Kristin Zosel also paced me. She’s a mom, and—let’s face it—we all become a little child-like in the later stages of things like this, so her mom energy is just perfect. Shelby Berg set up a crew station in the middle of the first night. It required lugging a heavy pack up a trail and staying up late into the night.

Was the discussion around Anna Frost and Missy Gosney’s 2015 finish at all in your mind? Did it influence your decision to push for the final trailhead in 60 hours, rather than call it a day at the final summit?

Absolutely, it influenced my decision to end at the final trailhead. Most importantly, I did not want to become a source of controversy. I am a peacemaker by personality and that sort of end game after a big physical and emotional effort would be really difficult.

Second, if I was able to reach the final trailhead in 60 hours, of course I was going to go there.

In looking at this as a strictly personal journey, my mind settles on the final trailhead as my end point. Mountaintops are incredibly awesome, but even when you’re fully adapted to 14,000 feet, it’s still like Mars up there. I was so tired up on Massive, peak 14. I couldn’t wait to get up and over the final summit bump and head down the other side.

What do you think about the ethics of off-trail running in potentially delicate alpine environments, as Nolan’s requires?

The Sawatch’s alpine is changing rapidly, and not necessarily for the better. I’m certain that anyone who has also been coming here for two decades would agree—though it’s the last 10 years in which I have noticed the greatest negative changes.

Existing trails were not developed for the volume of use they currently see, and improper widening and over-erosion is problematic. Users have developed abusive escape routes off the main trails for when they want to get down the mountain faster because they are tired or they have cut their outings too close to incoming weather. There is visible toilet paper and human feces littering the sides of the standard routes.

Even on the Nolan’s 14 line, in the four summers I’ve been spending time there, I have seen an increase in cairn-ing and the development of social trails in several places.

Many of the tops of the 14ers are broad and rocky, and users have moved rocks to create dozens of cairns, wind shelters and rock art—the character of these mountain summits are now forever changed. Mountaintops are littered with what I call “14er debris”: posters, flags, various kitsch people have carried up to take photos with on mountain summits but then have left. I have not topped out on a 14er this year without bringing someone else’s trash down.

In terms of the Nolan’s 14 line and the people who are spending time on it, I would encourage us as a community to de-cairn the route. The alpine can handle our careful and dispersed movements, but not if we are all following the paths of some of the bread-crumbed cairn trails that are out there in places now.

Also, we need to make the sometimes difficult choice not to travel when conditions can’t support us, like in the early summer when the alpine is still wet and our travel uproots plants.

It’s impossible to truly have zero impact, but we should each be making our best efforts.

More: How Nolan’s 14 became the Holy Grail of FKTs