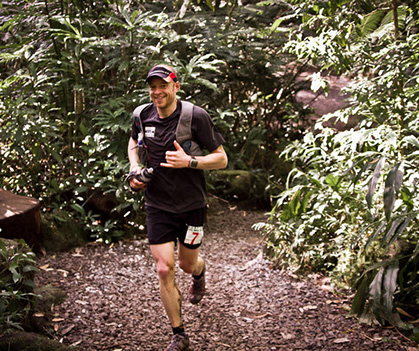 But, then, in 2010, while on a trail run in Sunriver, Oregon, with Max King and Geoff Roes, disaster struck. “There was a fresh dusting of snow overnight, and I slipped off the side of a snow-covered rock and basically folded my foot in half,” says Robbins. “I would later be diagnosed with a Jones Fracture—or a runner’s worst nightmare.” After a long recovery, Robbins re-broke his foot, resulting in another eight months on crutches.

But, now, as we recently reported, Robbins is back. On January 19, 2013, he smashed his own HURT course recordby 37 minutes.

Here we catch up with Robbins on his trail-running career and tough road to recovery.

Tell us about re-breaking your foot on the HURT course.

In May 2011, [my fiancé] Linda and I were house sitting for some close friends, just three-and-a-half months since I’d been back on my feet from the original break. I was on the HURT course at the end of a 100-mile week, cramming in training for Western States and UTMB.

I literally heard my bone snap and was in the most desolate part of the course. I had to hobble over incredibly technical terrain for about a mile, where I happened across some volunteer trail workers. They called in my injury and a few hours later search and rescue arrived with a helicopter. I was flown off the mountain while dangling in a basket 60 feet below the helicopter. That part was actually quite cool though!

How was your recovery?

I decided to forgo surgery and heal it naturally. The non-union fracture didn’t even begin to heal for almost six weeks, and the initial few X-rays were progressively worse. I was then fortunate to find an Orthofix, which is an electromagnetic bone-growth stimulator, which got the fracture to start healing. I ended up being on crutches for an additional four-and-a-half months.

What did you do when you couldn’t run, and how did it affect you mentally?

After the first break I focused a lot of time on my gym work, with single-legged and upper-body workouts. I was happy with the strength gains I made and felt like the time away wasn’t going to be a completely bad thing.

The second break was just worse on all levels. I felt a disconnect with my own body as I had no warning signals as to a potential re-injury. Back on crutches I ended up with a significant neck and upper-back strain that eliminated my ability to do any serious gym work.

I spent a lot of time attempting to remember who I was before running, as I couldn’t believe how quickly running had engulfed who I was. In my soul searching, I realized that I always wanted to be a part of the trail-running community, whether I could run competitively again or not.

I paired up with Geoff Langford and we founded and now co-direct the Squamish 50-Mile Trail Race. I had to redirect my energy and tried to take away a long-term gain from a short-term loss.

How did you get back into training and how did that go?

Elite ultrarunner and ski mountaineer Luke Nelson was an integral part of my recovery. Luke is a physician’s assistant and quite versed in Jones Fractures. He offered up a very specific training plan.

I was allowed to run one kilometer, once, in week one. In week two I was allowed to run a kilometer twice. On January 1, 2012, I could run 10 kilometers. I had been off of crutches for almost three months. Conversely, after my initial break, I was already back to racing a 50-miler in that same time frame.

Through the month of January 2012, I was allotted a grand total of 100 miles of running, and none of it on mountainous or technical terrain. I was painfully slow but I trusted Luke’s expertise and couldn’t stomach the thought of a third break and subsequent setback.

By March 2012, over five months since getting off crutches, I was finally allowed to head back into the mountains a few days a week. June was the very first “free-to-run” month that I was granted, and I promptly knocked out almost 400 miles of trail running.

Can you tell us about your occupation/family/lifestyle?

I am the co-RD for the Squamish 50. I also contract myself out to other race organizations to perform course design and management. I work one day a week in our local running store, North Shore Athletics, as their run-clinic coordinator.

What is your running history?

I was not a runner growing up. Prior to March 2004, I had literally run fewer than 100 cumulative miles in my life. I began expedition adventure racing and eventually finished four races, culminating with a 15th-place team finish at the 500-mile XPD Australia in 2007. Throughout my adventure-racing days, running was always the easiest and most-fun discipline for me, so in 2008 I sold my mountain bike and kayak and pursued ultrarunning.

How did it feel to be back on the HURT course, running past the scene of your injury?

It was … interesting. I had to run over the section of course where it happened 10 times during the race. The first lap I spotted the exact spot where I had broken my foot and just pointed at it and, as I passed by, said in my head that my ordeal was finally behind me.

The scramble-y bit of trail that was the most painful during my self extraction stayed with me throughout the day, though. As I passed that spot on all five laps of the race, I couldn’t escape the flashbacks.

How did the race feel?

It’s tough to arrive at a January 100-miler in better fitness than I found myself. I had just knocked down the biggest mileage month of my life—at 450—and in the final nine days of that span I hit 185 miles. I was confident but nervous given that I hadn’t run 100 miles in two-and-a-half years, since Western States in 2010.

The race was much more of a race than I’d anticipated as [2011 and 2012 winner and fellow Canadian] Jason Loutitt and I ran within three or four minutes of each other for the first 73 miles. Given that the course has so many out and backs, you can never “hide” from your competitors, giving the race a different dynamic. It effectively eliminates the free-thinking moments in which we can all too often doubt ourselves or over analyze how our run is unfolding.

I suffered very few low points and simply kept telling myself, “The climbs will humble you. The descents will make you feel like a rock star. Don’t assess your race unless you’re running downhill.”

At mile 80 after four loops, I had my quickest transition as I knew I had to break that umbilical cord that can present itself while running so close to another person. When I arrived at the mile-86 aid station, I was informed that my lead was close to 45 minutes and for the first time all day I was finally able to relax and appreciate how fortunate I was to be back.

2013 will be UTMF [Ultra-Trail Mount Fuji, 161 kilometers, April 26] and UTMB [Ultra-Trail du Mont-Blanc 168 kilometers, August 30] focused. I’ll fill in as my body and mind allow for but I want to give myself the best chance for success at these two races. I am now happily one week into a scheduled three-week training down turn before ramping up for Japan.

I’m also eyeing an attempt at a Wonderland Trail FKT attempt and I’d like to return to the West Coast Trail, as I believe I can bring that FKT down to under 10 hours. 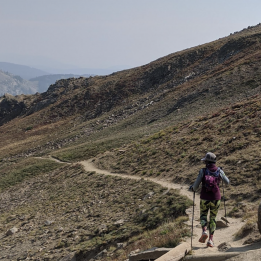 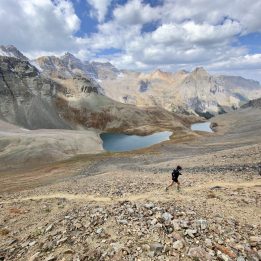