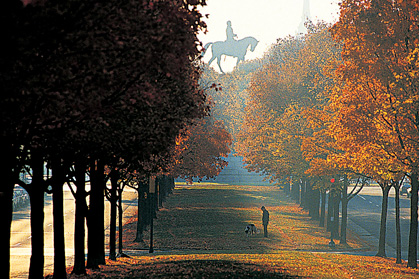 Go if … you want to be in a city and still call yourself a trail runner. At Richmond’s heart lies the 550-acre James River Park, with nearly 47 miles of volunteer-built trails, 30 miles of which is technical singletrack. “I like the feeling of being out in the middle of nowhere and running forever,” says runner and Richmond native, Katie Hedley. “You can run downtown amid buildings and people, then cross a bridge and immerse yourself in the woods that feel like backcountry.”

Richmond’s trails constantly expand as the city approves new greenway and trail projects. And its up-and-coming Manchester Arts District (which has been likened to New York’s Chelsea) attracts artists to Richmond as well as outdoorsy types.

Richmond also bursts with Civil War history. In fact, it’s where Patrick Henry made his famous 1775 speech, “Give me liberty or give me death,” and was the Confederacy capital during the Civil War. Drive down Monument Avenue to view monuments to Stonewall Jackson, Jefferson Davis, Robert E. Lee and others.

Best Trails For a 6.5-mile run in James River Park (jamesriverpark.org), run the North Bank /Buttermilk Trail loop, which crosses in and out of the park on switchback trails and city streets. Take the North Bank from Lee Bridge to North Bank Park, a craggy trail section cut into the river bank. Follow it to the historic Hollywood Cemetery where James Madison and others are buried, and later pass Japanese gardens and a granite quarry. The Buttermilk Trail gets its name from a cool, mossy spring on 25th Street, where farmers used to store their butter and cream.

Another two-mile side trail through Forest Hills Park offers little elevation gain as it crosses Reedy Creek and connects back to the Buttermilk Trail.

Drive 30 minutes from downtown to Pocahontas State Park in Chesterfield, where, according to local ultrarunner Christopher Calfee (whose claim to fame is running 318 miles non-stop in this park in 2005), you run 20 to 40 miles without ever retracing your steps. However, park maps are unreliable. “It’s easy to get lost,” warns Calfee.

For a gently rolling 18-miler almost entirely immersed in trees, take the five-mile Old Mill Bicycle Trail to Fendley Station, a 13-mile loop around the park’s perimeter. Or, link three Lakview Mountain Bike Trails for a rocky, rooty, wooded 13-miler on singletrack. For a short jaunt, run the five-mile Beaver Lake Trail. Then cool off in the park’s swimming pool or have a picnic alongside Swift Creek.

Race Join the fun at June’s XTERRA Trail Runs (xterraplanet.com), a 10K and 21K in James River Park. The course involves a series of man-made and natural obstacles such as the Manchester Staircase and the boulders of “Rock City.” The James River Scramble (sportsbackers.org), a 10K in mid-May, is Richmond’s largest trail race with 1200 participants, and, starting from James River’s Brown Island, gives runners a scenic tour of downtown, and mostly follows singletrack trails.

> refuel Hidden behind a huge iron door, Mamma Zu’s is barely noticeable from the street, but locals rave about its eclectic menu, including simple salads and decadent pasta dishes.

Located in Shockoe Bottom next to the 17th Street farmer’s market (Saturday mornings) is Bottoms Up Pizza, (bottomsuppizza.com), which was voted the city’s “most inventive pizza” by Critics Choice Restaurant Awards for its bigger-than-New-York-style slices. In the James River Park, Legend Brewery (legendbrewing.com) was voted Best Outdoor Bar in 2001 by CitySearch. Its weekend live music performances on the patio will beckon you off the trails.

> Resources Richmond Road Runners (rrrc.org) has detailed information about trails and races while the Richmond Convention and Visitors’ Bureau (visitrichmondva.com) has info on places to stay, play, dine and shop.

a) Richmond does not have 47 miles of trails within the city limits; b) the city does NOT “constantly” approve new greenway and trail projects, and does not care about pedestrian/runner safety; c) if you feel like you are in the “backcountry” while running in Richmond, Virginia, then I am sorry; d) Road Runners Running Store was corporately bought out by RSG/Finish Line/Jackrabbit; e) Pocohantas State Park is NOT in Richmond; however, it is nice when you are able to avoid the disrespectful mountain bikers; f) finally, Richmond Road Runners Club is a group of middle to late age running hobbyists. I think that there are far far far better running communities that should have been featured. Finally, even though this article is from 2013 many would think that the city would advance into a runner’s dream, well now in 2017 the city has actually taken a steps back from what was featured in this article…