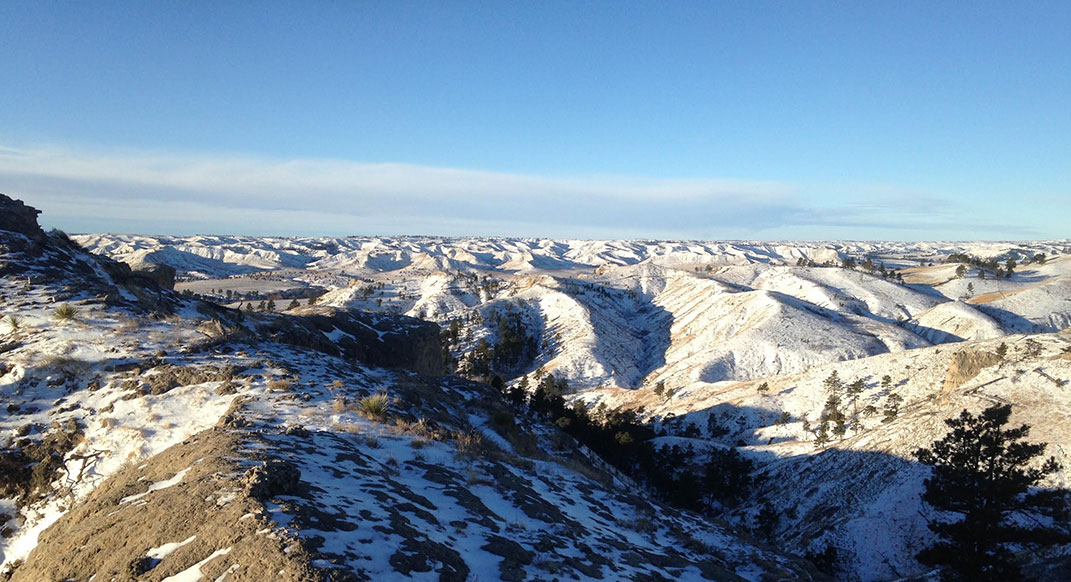 I mean, I love where I live. It’s the heartland. The state motto is “The Good Life.” Still, there are certain place names that incite a little pang of jealousy in me when I come across them.

In Nebraska, trail running is not the standard. Our home is a place people go through on the way to those other places. Oftentimes, sports here are defined by the lights of Friday night and endurance is measured in seconds on the back of a bull or horse, and unless you are carrying a firearm and a permit, Nebraska’s land use is not generally geared towards outdoor endurance pursuits. Blaze-orange running shorts are, however, a decent common ground between hunters and runners.

So how does a person in Nebraska get pumped to run trails? Among the stadiums and ranches and acres of farmland, we carve our own little experiences. Often a bit contrived, but with no less passion, we run endless loops of wooded paths. We simulate peak bagging with stair and tower climbs.

Cruising Through the Cornstalks

Old railroad lines have been converted into multi-purpose bike trails that weave through small towns surrounded by fields upon fields upon fields. Along most of these trails, the scenery and terrain are remarkably consistent—but somehow inspiring. A friend of mine who ran the cowboy trail (see below) in Northern Nebraska said it was some of the biggest sky he had ever seen: no fences or power lines for miles. He also said it was some of the quietest running he had ever done. The only noise was from his feet crunching on the grey, crushed-limestone trail and the rustle and whistle of the wind over the prairie and through the cornstalks.

Pete Kostelnick, winner of the 2015 and 2016 editions of the Badwater Ultra and record-setter for the TransAmerica Run in 2016, accomplished his feats while living in Lincoln, Nebraska (he now lives in Missouri).

“It comes down to building character and fortitude,” he says. “The trails in Nebraska may not be that sexy, but what they do provide is a good foundation. You have the hills you need. The rails-to-trails give plenty of uninterrupted, soft terrain. Maybe most importantly, it is repetitive. That makes you as mentally strong as anyone.”

Closer to the urban center in the east of the state, there is a bit more variety, such as the Roger Sykes Trailhead or the Scott Lodge Tower in Platte River State Park. At Indian Caves (see below), while catching your breath at the top of any one of the numerous short and steep quad burners, you will catch a glimpse of the Platte or Missouri Rivers, decorated with ice floes in the winter and air boats in the summer.

The truly secret destination of Nebraska trail running is in the northwest part of the “panhandle” region. Miles and hours from anything resembling an urban area, and with an altitude higher than Denver, the gullies and ridges of this area provide a surprisingly difficult scramble. Topping out on a bluff or tracing one of the ridgelines will give you views that likely haven’t changed much in the last 170 years. In the distance, take in Chimney or Jailhouse Rocks—sandstone monoliths that were landmarks for people traveling the Oregon Trail. Actual wagon-train ruts still exist, worn into the hillside. Dodge the occasional rattlesnake, swing around a herd of free-range cattle, tiptoe through the pines and be rewarded with some of the widest, most unobstructed views a person can find anywhere outside the mountains.

So while it may not be your final destination, pause your road trip, stretch the legs and check out one of our favorites for a different flavor of running.

Location: Valentine to Norfolk. Main trailheads are in the middle of Valentine just off Highway 20 and in Norfolk just over the Elkhorn River next to Highway 81.

Location: Lincoln to Kansas Border. The main trailhead is in South Lincoln, just east of Highway 77 and Saltillo Road. There are many trailheads along the same highway.

Location: Between South Bend and Louisville. Drive south from exit 426 on
Highway 66.

This is the gem of eastern Nebraska trail running, with wooded single track and plenty of hills. You might need to share with mountain bikers, but they do a damn good job of trail maintenance. I’ve put 2,500K of vertical in over 19 miles. Not bad for around here.

Location: Malcolm. I-80 to Exit 409B in Lincoln. Take Highway 34 North and follow the signs.

Prairie and wooded singletrack, looped in with gravel roads.

Location: South of Brownville. Take the I-29 in Missouri, take Exit 110.

Well worth the drive for some solitude on wooded singletrack along the Missouri River. Park down by the namesake cave and go explore.

Location: West side of Lincoln.  Adjacent to the capital city of Nebraska.

Location: Crawford. Near Highway 20 and Highway 71.

Not really near anything, but incredible and historical. Run on everything from bridle trails in bluffs to two-lane ATV/4WD trails. Keep an eye out for big horn sheep, elk and mountain lions. And bring your fly rod for some small creek fishing in the area.

Location: South of Gering. Take Exit 22 at Kimball and drive north on Highway 71.

This is the closest thing we have to the southwest style of running.

The other closest thing we have to desert running. If you ever played Oregon Trail and want to see it for real, here you go.

Location: Omaha to Lincoln.  Trailheads are south of 84th and O streets in Lincoln and outside Louisville on Highway 50

Race rats can check out Greater Omaha Area Trail Runnerz (GOATz), who organizes many local running events and races throughout the year.

Home of the Pixie Ninja!

There is no place like Nebraska. The girls are the fairest and the guys are the squarest.

Many of the best trails in Nebraska are further for most of the population than the mountains in Colorado are. That is why they don’t get much use. I live in here and trail run daily though; like anywhere you just go out and find the best places in the time you have available. Many great ones not on this list too.

We do have some great trail running in Nebraska! Especially the Pine Ridge of Northwestern Nebraska. We’re hosting multiple trail races this summer if interested in checking it out. Check out Pine Ridge Trails Race Series on Facebook or http://www.pineridgetrailsraceseries.com