This article originally appeared in our January 2006 issue. 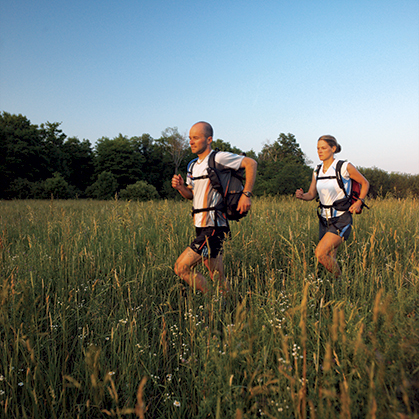 This early summer morning, we are sorting our trail-running gear in a plush hotel room in downtown Ottawa, Ontario. We’re taking our time, soaking up the comfort of a soft bed and thick bathrobes while we can. The sun warms the sky as we prepare to hit the 305-kilometer Rideau Trail, which will lead us southward back to our hometown of Kingston, Ontario.

“We’re looking a little less glamorous than at our wedding, aren’t we?” I observe as I haphazardly draw all over my face with a sunscreen stick.

“Back to our natural habitat!” Derrick adds while applying vast quantities of body lube to himself.

A short time later, as we locate the trailhead near the hotel and take the first few giddy steps, the words we had written for our ceremony yesterday are still fresh in our minds… Derrick and Sara believe you do not get married so much as become married, on a long journey together through life …

We had kept our wedding simple, limiting it to our innermost family circle. Instead of gifts, we requested donations to our local animal shelter or the Rideau Trail Association. And for our honeymoon, we had planned every detail of this
fastpacking adventure together—our own “Rideau Quest.”

Two days before the wedding, we couldn’t remember what time the ceremony would begin, but we did know the weight of each toothbrush we would bring on the run, having analyzed our trail gear in absurd detail.

The Rideau Trail traverses a range of diverse environments, from the rolling pastures, deciduous forests and flat wetlands of the Ottawa Lowlands, to the wildness of Canadian Shield (a landform that is more typical of northern Canada, but this narrow arm reaches down to the Adirondacks of New York State). The Shield is known for its abundance of lakes nestled below rugged granite outcrops, converging with a vibrant forest of cedar, pine, birch and maple. It begins and ends in urban centers and travels through several small villages at regular intervals.

itanium, symbolic of not wanting their marriage to weigh them down …

No one really believes a pound of feathers weighs, well, a pound, do they? We had pulled together two mean, sleek packs of the ultra-lightest gear we could find. So each time we heft them onto our shoulders, we rationalize their weight. “None of this stuff weighs anything, so they can’t be too heavy.”

After a full day of running, the bruising and tenderness of my right metatarsals tells me otherwise. Today’s 45 kilometers of pounding—much of it on paved biked paths leaving Ottawa—compounded by the weight of the packs, has already taken its toll. As we scout out a place to camp for the night, dark clouds sweep in with heavy rain. The storm quickly passes though, and we spend the evening regrouping and deciding which gear we can live without. We jettison a few pounds of clothing and toiletries (leaving it with some friends who met us) and—gambling that it won’t rain again—our tent fly.

… The best path in life isn’t always obvious, but if you keep looking, eventually you will find your way together …

The next day the sun is shining brightly. We tentatively set out again, back on soft trails, and are relieved to find that my foot has stabilized.

Derrick and I start to wonder how frequently this northern part of the Rideau Trail is used. We often encounter sections where it disappears into groves of brambles, with no indication of where to start our prickly scavenger hunt for the next orange trail marker. Countless times, we trudge through hayfields where there is no sign of previous human traffic.

… They will undoubtedly encounter challenges, which they know they can get through, as long as they have each other …

Up to our waists in water, we slog through swamps of cattails, looking for markers on trees around the most unlikely of corners, while deer flies swarm our sweaty upper bodies. Derrick leads me through while I hyperventilate at the thought of what might be lurking in the murky depths.

With just an hour before darkness, we set up camp in a stand of cedars beside a gravel road. Mosquitoes are thick in the woods, and drive us back up to the road to make our dinner there.

That night the temperature falls to an unseasonable chill, and we shiver to stay warm. Even with the lack of sleep, the next day we feel good. We stop in a small town for breakfast, and inhale enough for a $34 bill. This helps stave off fatigue, but by the end of the day my right foot, still a weak spot, is on fire. The day mercifully ends when we meet friends, who had arranged to bring us a hot meal of salmon fillets and rice. Although slightly slower than we hoped, we’ve been able to maintain about 45 kilometers per day.

Day four dawns with excitement, as we set out to enter the more rugged southern sections of the trail that we train on regularly. But less than an hour into the run Derrick’s left IT band flares up at the knee. It refuses to loosen, even after desperate stretching and trailside massaging. While hobbling a mere 17 kilometers, we must come to terms with the inescapable fact that we can no longer run, an agonizing realization.

We stumble off the trail onto a lonely country road, and a truck happens by at that very moment. The driver doesn’t have room inside, but offers us a ride on the back, and we grab onto the roof rack as he speeds off. We hadn’t planned for bumper hitching to be part of this honeymoon run, but at least we’re going out in adventurous style.

We end up in another posh room, this time at an inn in Westport, halfway to Kingston. Although we’d rather be out on the trail, the deep Jacuzzi tub and soft bed are bliss to our wrecked bodies.

In the turmoil of our thoughts, we strive to focus on the many positives. Over four days and 152 kilometers, we soared through euphoric moments and took turns carrying each other through rough stretches. In the end, we come to understand that if all goes as planned, then no adventure exists. And where’s the fun in that?

What. A north-south 305-kilometer (189-mile) trail from Ottawa to Kingston, Ontario, featuring a wide variety of terrain, including rural gravel roads, farmland, mixed forest and the rugged beauty of the Canadian Shield wilderness.

Seasons. The trail is accessible year-round, though its condition varies widely throughout the seasons. Many wet sections between Richmond and Murphy’s Point Provincial Park in spring and summer. Fall is optimal for dryness, lack of bugs and autumn leaves.

Gear. Southern sections are rocky and trail shoes are essential. Insect repellent is also a must in spring and summer.

Sara Montgomery and Derrick Spafford are avid runners who compete in trail races in eastern Canada and the U.S.