A new 345-mile race pushes one runner to new heights. 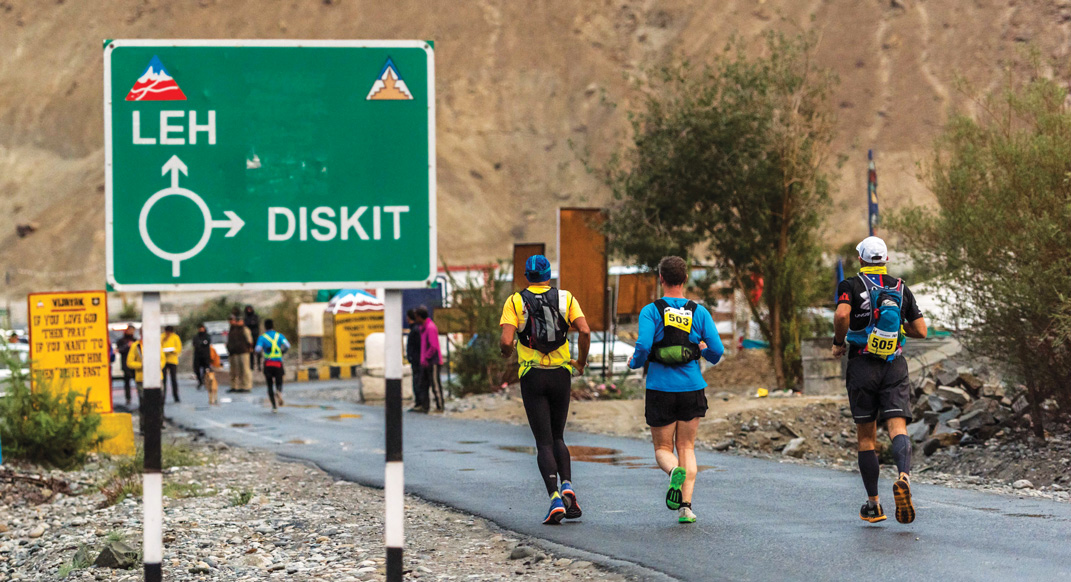 The odds were stacked against Jason Reardon. It was mid-August and he had suffered through a brutal blizzard at the high pass of Khardung La (18,380 feet) on the first night, and more snow at Wari La (17,400 feet) the following day. The battering that his knees had endured over the 240 kilometers was taking its tool. And he still had 315 kilometers to go.

In its 10th edition, India’s La Ultra poses a daunting yet seductive prospect in the high Himalaya. The newly introduced 555-kilometer category ran across three high passes in the cold, desert area of Ladakh, climbing to over 17,400 feet on five occasions. Five brave souls had started the race. Reardon, 38, of Sydney, Australia, had been in extremely challenging situations before—while racing and in life—and in turn had picked up a knack of beating the odds, one trademark beaming smile at a time.

While growing up in Canberra, the capital city of Australia, Reardon, now an ultrarunning and obstacle-course racing (OCR) coach, played soccer, baseball and rugby, and excelled as a sprinter. In his early 20s, he joined the Australian Army and soon got married. While Reardon was away from home on an army exercise, his wife delivered their baby boy. Tragically, the infant passed away a few days later. It wasn’t until three weeks after that Reardon received the news.

“My wife sank into depression and blamed me for what had happened,” says Reardon. “We soon went our separate ways. Though I tried to focus on work, I eventually had to leave the Army four years later.”

Before he realized it, Reardon had slipped into depression himself, spiraling into several years of alcohol dependence and dark times. Desperate and in need of something to focus on, he took to running in 2008.

“I quickly learned that when I run, I’m free,” he says. “I get to do what I want, there’s no one around to hustle me. I just sort of switch off from other things and get away from negativity. It’s meditation, really.”

Even as he found his feet while treading the miles, he met with a car accident on a trip to southeast Asia in 2012.

“A fractured pelvis, a punctured lung, a broken foot and head trauma—my doctor said I wouldn’t run again and I wanted to prove him wrong,” says Reardon. “So I took on obstacle-course races in 2014 for the next few years.”

It wasn’t until 2017 that he ran his first ultra, in Sydney. After ticking off other races around the world, the 222-kilometer event at La Ultra last year caught his attention. He signed up and ticked off a quick first 111 kilometers in the race, but the altitude and a nasty stomach bug laid him low in the second half. It took a massive effort for Reardon to get across the finish line in 46 hours 38 minutes. “That was a hard mental battle,” he recalls.

Once he recovered, the lure of the mammoth 555K distance sucked him in.

“It’s important to test your boundaries. A lot of people with mental-health issues get in touch with me for advice,” says Reardon. “And by pushing my limits, I like to show them that you can always improve your mind and, in turn, your life.”

After those first two brutal nights at this summer’s La Ultra, Reardon’s knee forced him to slow his pace, and he trailed the leaders for most of the next two days, even as two of the runners, Lukasz Sagan and Praveen Sharma, dropped out.

Running in third on the fourth night, Reardon steadily descended the Wari La for the second time. The clouds rose like plumes of smoke from atop the peaks, as the stars played peekaboo amid them. He felt strong, having rested for several hours after coming down each of the four previous passes.

After checking in at Serthi (around 490 kilometers into the race) the following morning at 10 a.m., he decided to make his move, as the other two runners in the lead, Matthew Maday of the United States and Ashish Kasodekar of India, opted to check in for some rest.

“I got rid of all self-doubts at that point and decided to just go for it,”
says Reardon.

The final stretch saw him hit a nippy pace, engaged in hearty conversation with his pacer Shreyans Gupta. He seemed to have put the pain and sleep deprivation behind him momentarily.

“First he had suffered the knee issue, but that’s hardly unusual in a race like this one. Then, he was also having trouble with his crew, which he eventually switched up,” says the race director Dr. Rajat Chauhan. “At 333 kilometers, I thought it wasn’t really possible for them to finish since they made it just a few minutes before the cutoff. But, once they pulled off Wari La, at 490 kilometers, for the second time, it was clear that they would. But the time that Jason made up and pulled it off in was really extraordinary.”

Under a setting sun, Reardon checked in at Shanti Stupa in Leh at 6:05 p.m. on August 22 to win his biggest race yet, in a time of 5 days 19 minutes. His ever-present smile gleamed, as he absorbed his accomplishment.