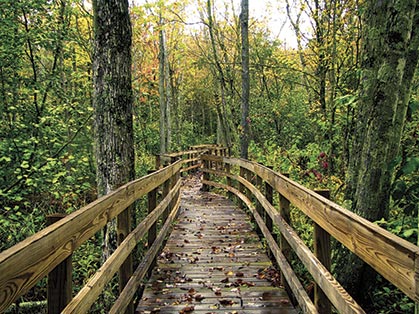 The Ice Age Trail runs through the Rahr Memorial School Forest on the shores of Lake Michigan. Photo by Melanie Radzicki McManus

The idea was so deliciously simple that a smile broke across my face the minute it occurred to me. I decided to run the Ice Age National Scenic Trail and attempt to set a women’s fastpacking record. At age 52. How cool would that be? It’s pretty much impossible to get PRs when you’re in your 50s, let alone win a race or set a course record. So if you’re competitive like me, the answer—as I’d just realized—is to come up with a unique challenge.

The Ice Age Trail (IAT) is part of an elite group of 11 National Scenic Trails, including the Appalachian and Pacific Crest. Its roughly 1,100 miles wind up, down and across Wisconsin, gently tracing the edge of the last glaciation, which ended about 10,000 years ago. Along the way, the trail showcases some of the world’s best-preserved glacial remains—features like immense erratics, or boulder-like rocks the glacier snatched and silently slid elsewhere, and landforms such as steep, snaking eskers, formed from the detritus of streams that once flowed beneath the giant ice sheets.

With about 650 completed trail miles, the IAT is only half finished, but thru-hikes are still possible. All you have to do is hike all of the trail segments plus the roads in between. That’s what Jason Dorgan did in 2007, when he set the overall record, running the IAT in 22 days 6 hours, averaging 47 miles a day. It’s Dorgan, a running buddy, who inadvertently gave me the idea to attempt a women’s record when he mentioned fewer than 30 people have thru-hiked the IAT. Surprised at the miniscule number, I did a little digging and discovered only three of those thru-hikers were women. The fastest hiked it in 49 days. If I ran a modest 30 miles per day, I’d smash the women’s record.

I would spend the next nine months settling technical details like resupply spots and where I’d stop each night. My running routine largely stayed the same—10 miles a day on land or in the pool, with a 12-to-15-miler once a week—because, as Dorgan advised, you can’t really train for something like this.

My plan was to depart from the western terminus in St. Croix Falls, heading east to the trail’s end in Sturgeon Bay. I’d run in September, when there should be moderate temps, few bugs and gorgeous fall colors. I’d have a support crew ferry my food, water, extra clothing and medical supplies, plus shuttle me between the trail and my night’s lodging. Finally, everything was set, and I hit the trail on August 31. 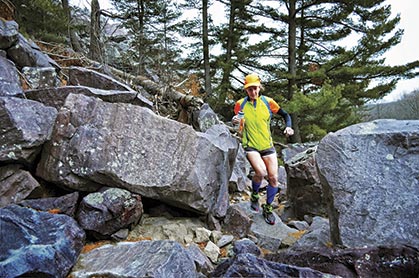 The author navigates a tough stretch of the Tumbled Rocks Trail in Devil’s Lake State Park. Photo by Gary Knowles.

Day 1  | It’s already warm and sticky at 6:17 a.m. when I touch the western terminus marker and begin slowly jogging through the woods of Interstate State Park. So much for moderate weather. Rounding a bend, I spot a deer on the trail. It holds my gaze for a few seconds, then scampers into the brush, its white tail flipping up in alarm.

I run along a small esker, drift through flower-choked singletrack and cross several tiny streams before stumbling upon three young men. The guys say they’re running 60 miles of the IAT this weekend, then effortlessly lope off and fade from view. Later, the mercury well above 90, I cruise past the trio, now slowly walking. I know we’re not racing—I can’t slip into that mindset—but it feels good when I remain ahead of them the rest of the day.

Day 6 | After my triumphant first day, I have a tough week. The volunteers who maintain the IAT haven’t yet trimmed back the summer growth, and thick swaths of ferns swallow narrow dirt paths. Shoulder-high wild raspberry bushes reach out and slice my arms and legs, while sneaky tendrils snake along the forest floor like trip wires, causing me to face plant. Several beaver dams and boardwalks are so smothered in vegetation that all signs of the trail are erased. Wielding my trekking poles like machetes, I painstakingly bushwhack my way along. I tell myself my snail’s pace is actually a strategic warm-up—I can pound out the miles later, when the trails are tamer.

Day 9 | I turn 52 today, and my gift is the infamous Mondeaux Esker, a segment reportedly in grim condition. I gird for battle, donning tights and arm sleeves despite the heat to protect my skin. But the trail’s not so bad. Yes, the adjacent flowage sucks at the earth, collapsing sections of trail and exposing thick, snakelike tree roots that are difficult to navigate. And the forest floor in the eastern stretch is such a tangle of woody debris that no trail is discernible, forcing me to run blaze to blaze. But I’ve acclimated, and am actually enjoying the northern trail’s challenges.

Day 12 | Gritty glacial debris relentlessly hammers my feet, blistering my toes and splitting my skin. I wake up with a fever and an oozing, smelly foot. Reluctantly, I log a “0” for the day but am thankful I’m in Antigo, one of the larger cities along the trail’s northern reaches. My support crew takes me to its urgent-care center, where I’m prescribed antibiotics. The doctor tells me to stop running for several days. I smile and nod, silently planning an extra-early start tomorrow.

Day 24 | I’ve conquered the north and am plunging south. Today’s task: tackle the quartzite bluffs at Devil’s Lake State Park. At 1.7 billion years old, the pretty, pinkish rocks comprise one of North America’s most ancient rock outcrops. But their beauty belies their difficulty. The east bluff’s Tumbled Rocks trail, which climbs an enormous jumble of quartzite, is a scant 0.4 miles, but takes 19 minutes to ascend. My reward? I’m set free to fly along the bluff’s crown before veering off on twisting singletrack that rolls down its opposite side.

Day 29  | Kettle Moraine State Forest, site of many great trail races, marks the start of my push north to the eastern terminus. During the previous weeks I’ve communed with deer, grouse, turkeys, black bears, snakes and cranes. I’ve traipsed through lush prairie and beside roaring waterfalls, run through the giant, metal culvert guiding Chaffee Creek under Interstate 39 and glided across glacial Lake Wisconsin on a ferry (yes, the ferry ride is part of the trail). What will my final week hold?

Day 34 | The trail swings sharply east to Lake Michigan. The glacier formed all five Great Lakes by scraping enormous depressions into the earth as it receded, then filling them with its meltwaters. Today the trail coughs me out onto the lakeshore at Point Beach State Park. It’s foggy and damp, and the only easily runnable, packed sand has a nasty camber. I run along it anyway, and whoop with glee when I’m led back into the woods and my favorite type of trail: soft dirt and sand dusted with pine needles.

Day 35 | Just over a day left. I’m thrilled, yet wistful. My foot is feeling better and I’m running strong. I love spending my days exploring beautiful, remote stretches of land and discovering prime trails. I’ve even developed an affinity for the road sections, which always hold surprises—like the misty day I ran past a herd of bugling elk, their prehistoric sounds echoing across the pasture, following me as I ran.

Day 36 + 5 Hours | It’s sunny and cool when I pop out of the woods at Potawatomi State Park and touch the eastern terminus rock, then climb the adjacent observation tower to take in expansive views of Green Bay. I’ve snagged the women’s thru-hike record. Yes! But if not for that foot infection, I could have finished a day earlier. Subtract a few more days if the northern trails had been trimmed back. Hmm. Perhaps I’ll stage a re-match next year. I could break the women’s thru-hike record at age 53. How cool would that be?

This article originally appeared in our September 2014 issue.

I admit it’s silly to nitpick on such an outstanding achievement (from a 6-year-old article), but the Tumbled Rocks Trail runs along the West Bluff. The Balanced Rock Trail better fits the description here of a short ascending trail followed by a winding descent.