The greatest of the greats 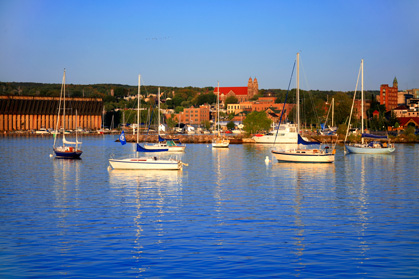 Go if You want to bask in the enormity of the greatest of the Great Lakes after some breezy trail miles on sandy shoreline, smooth hardpacked hills and rocky climbs. Superb trail running is ubiquitous in Michigan’s Upper Peninsula, and Marquette, situated on the south side of Lake Superior, has over 100 miles of singletrack, as well as an urban trail system linking the city neighborhoods and parks. With a population of 21,000, Marquette is equal parts civilization and wilderness, with handy bike paths connecting the two. “There are a lot of trail runners because the trails are right outside our backdoors,” says local Mary Connor. Two trail clubs, The Hot Flashes (for women of a certain age) and the newer Run Guys and Girls, offer weekend and weeknight trail-running camaraderie and insider knowledge on local routes.

Race … The Run for Youth (runforyouth.org), with 5K, 10K and 25K trail options, is held on the Noquemanon Trails in June, with a point-to-point course for the 10K and 25K on the Lower Noquemanon Trail. September’s Lake Superior Shoreline Trail Half Marathon & 5K Race Against Tobacco (mqthealth.org/shorerun.htm) is sponsored by Marquette’s premier outfitter, Downwind Sports. “The great thing about the course is that it incorporates Marquette’s varied trail styles,” says Downwind Sports owner, Bill Thompson. “The race starts off on the shores of Lake Superior, on sandy trails through jack-pine forests. Then it climbs through hardwood forests, around a bog, over Hogback Mountain, then back on the Lakeshore Trail, which treads 100 feet up above Lake Superior.” July’s Grand Island Trail Marathon and 10K (greatlakesendurance.com), held 40 miles west in Munising, is run on the ferry-accessible island’s shady and breezy singletrack, narrow dirt roads and beaches. Enjoy lake views and the multi-colored sandstone cliffs of Pictured Rocks National Lakeshore on this wilderness island.

Best Trails … “My favorite place is Harlow Lake State Park, which has over 25 miles of trails, some of which are right along Lake Superior,” says Connor. “You can run along the shore to a wilderness beach then cross over a road into rolling hills.” The Noquemanon Trail Network, six miles southwest of the city, has a variety of largely singletrack trails. Run the Carp River Loop, with steep climbs that wind around Marquette Mountain Ski Area. Presque Isle Park, commonly called “the island,” juts out into Lake Superior five miles north of Marquette. Loop around its two-mile shoreline along rocky red cliffs and pebble beaches, then head inland for five-plus miles amid white birches and hemlocks. The North Country Trail (NCT) passes through Marquette, loosely taking Superior’s coast north of the city. When completed, it will connect seven states and 4600 miles, from New York to North Dakota, making the longest hiking trail in the United States.

Go when … By the end of August, temperatures drop from summer highs in the 80s to the low 60s, and the bugs have disappeared. Lake Superior is at its warmest in the fall, providing the opportunity for a perfect post-race dip. Just make sure you wear orange when hunting season rolls around in November. Despite receiving regular snowfalls, Marquette’s trails are usually runable even during the deep winter, making Marquette a four-season running destination.

Pitstop … Downwind Sports (downwindsports.com) in downtown Marquette will outfit your every trail-running whim.

Sleep … Spend the night up the coast in Big Bay at a century-old functioning lighthouse, the Big Bay Point Lighthouse Bed and Breakfast (bigbaylighthouse.com), which grants you access to the top of the lighthouse for views high above Superior’s waters. While there, watch the 1959 film, The Anatomy of Murder, which was inspired by events at the lighthouse and filmed on location. Rooms start at $125 a night, including a full breakfast and afternoon cookies.

Resources … Work out trip details at the Marquette Visitor’s Bureau (marquettecountry.org). Study maps at the Noquemanon Trail Network website (noquetrails.org). Mary Connor (Marymarq5@aol.com) of the Sports Rack Ltd, can give you the lowdown on local trail-running groups.