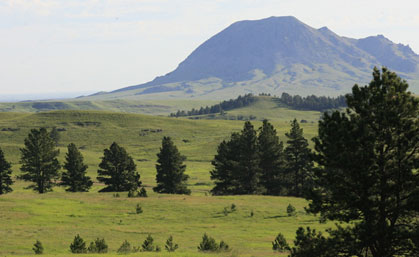 South Dakota might not appear like a trail runner’s paradise … at first thought. The state conjures up images of prairie and grazing bison rather than high-altitude vistas and rocky ridges lined with singletrack. But in the state’s southwestern corner, an isolated patch of small mountains defies the state’s flatland reputation.

Boasting some of the country’s highest points east of the Rocky Mountains, including 7244-foot Harney Peak, the Black Hills are an oasis for mountain lovers in the Midwest. The region (which extends slightly into Wyoming) encompasses the Black Hills National Forest and contains hundreds of miles of smooth, rolling singletrack plus steeper, technical offerings going up to—or down from—the region’s many peaks.

Here, you can drift through the prairies with views of far-off buttes or romp beneath the shade of hillside pine trees. And interspersed between it all are small towns that, over a century after the gold rush drew settlers to the region, retain much of their frontier charm.

The ample offerings of runnable terrain play host to several races throughout the year. One of the Black Hills’ marquee trails—the Centennial—is so “runnable,” as local race director Chris Stores puts it, that it nearly acts alone as the course for the annual Black Hills 100 Mile, 100K and 50 Mile races, which were just held for the second time and are billed as an alternative to another “runnable” race held on the same weekend: Western States.

“It’s actually the runnable nature of the Centennial that gets people in trouble at the Black Hills 100,” says Stores. “Unlike 100-milers like Leadville and Bighorn, which have stretches where it is painfully obvious that you should be hiking, the Centennial’s constant up and down wears on you.”

The Black Hills provide easy access to Mount Rushmore National Memorial, Badlands National Park, Wind Cave National Park and Custer State Park, making it an easy trail-running stopover on your next family vacation as well as a great trip on its own. 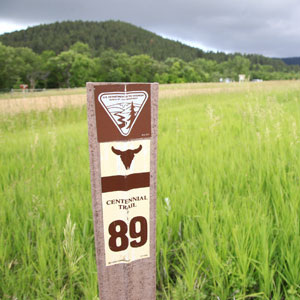 Trails
The Centennial Trail traverses over 111 miles of easy to moderate terrain, ranging between 3200 and 5600 feet in elevation, and is accessible from Sturgis, on the northeast side of the Black Hills. Other notable trails include the Victoria Lakes trail system outside of Rapid City; the Flume Trail, which runs 15 miles from Sherian Lake to Rockerville; the Deerfield Trail, which intersects the Centennial and serves as part of the Black Hills 100 course; and the Old Baldy/Rimrock/Little Spearfish Loops, all shorter but moderate-difficulty trails south of Spearfish, north of the Black Hills.

Note that the Black Hills is a popular area for recreational ATV use, and that one 14-mile stretch of the Centennial Trail is ATV accessible, and thus wider and rockier than the rest of the trail. ATV users are instructed to yield to hikers, runners and those on horseback, but stay aware of your surroundings to avoid getting in each others’ way. 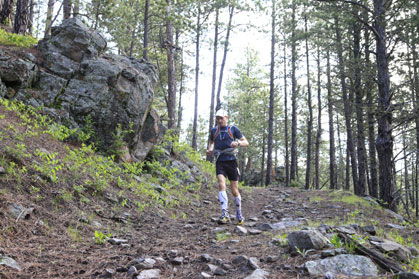 Races
* The Black Hills 100 Mile, 100K and 50 Mile is held the same weekend as Western States in June and features an out-and-back course on the Centennial Trail, starting and ending on a track in Sturgis. (www.blackhills100.com)

* The Lean Horse 100 Mile, 50 Mile and 50K is held in August on the wider Mickelson Trail, starting in Hot Springs. (www.leanhorsehundred.com)

Weather. The climate in the lower parts of the Black Hills can get surprisingly hot and dry for the Midwest—the average temperature is regularly over 80 degrees in the summer and temps tipping 100 degrees are common. Prepare for desert-like conditions—especially in dry years (like this year) when the region’s creeks can run dry.

Cougar Town.The Black Hills has its fair share of wildlife, including one of the most concentrated populations of mountain lions in the U.S. According to the Black Hills Mountain Lion Foundation, the region has an estimated population of between 200 and 225 cougars, and, though sightings are rare, be aware of your surroundings and know how to react should you encounter one of these large cats (the short answer is: don’t run). Also, watch your step—a lot of rattlesnakes call the Black Hills home.

Other wildlife to watch for: Bison, deer, badgers, coyotes and foxes. If you’re camping or picnicking, keep an eye peeled for wild burros (as well as the standard set of rodents) who might come looking for food.

Getting There.Rapid City, South Dakota, is the largest city adjacent to the Black Hills region, located directly to its east. Other access towns – where you’ll find plenty of amenities, food, etc.—in South Dakota include Blackhawk, Sturgis and Spearfish. Deadwood, Custer, Lead and Nemo, located within the region, make excellent stopovers with quick access to the trails.

From the Wyoming side, both Sundance and Newcastle lie adjacent to the Black Hills, to their west.

What Else to Do.Mount Rushmore National Memorial, arguably the standard-bearing photo opportunity for the typical American road trip, is located 23 miles west of Rapid City in the Black Hills. To the south are historical Custer State Park and Wind Cave National Park, also within the Black Hills. You can also see the unfinished Crazy Horse memorial, less than six miles from the town of Custer, South Dakota.

To the east of the Black Hills, Badlands National Park offers stunning desert rock formations—visit the famous Wall Drug store, directly north of the park, on the way in or out. West of the Black Hills in Wyoming, Devil’s Tower National Monument is 27 miles from Sundance.

Dining and Brews. Grab a steak at the Bum Steer in Spearfish; indulge in all-American cuisine and take in country music at the Loud American Roadhouse in Sturgis—home of the famous motorcycle rally; grab a burrito from Barbacoa in Spearfish. For local brews, head to Crow Peak Brewing in Spearfish or Firehouse Brewing in Rapid City.