Stride into the Ice Age 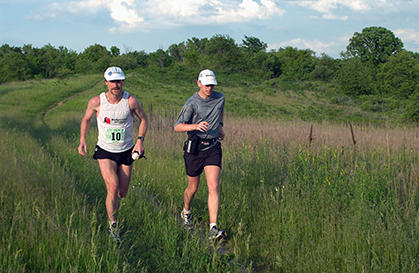 Kettles, drumlins, moraines, erratics and eskers are not in all trail runners’ vernacular, but they are familiar terms to upper Midwesterners. Over 12,000 years ago, the area that is now called Wisconsin was covered in a vast sheet of glacial ice, and the unique geologic features left behind have created a fantastic trail-running environment. And the state’s showpiece is the 1000-mile Ice Age Trail.

Conceived by Milwaukeean Ray Zillmer, the non-profit Ice Age Trail Alliance was formed in 1958 to create the trail, and now features 21 local chapters. Says Eric Sherman of the Ice Age Trail Alliance, “The trail is almost exclusively built and maintained by volunteers. In 2009, we had more than 58,000 volunteer hours.”

To date, 154 people have hiked or run the entire length of the trail section by section. Seventeen of those have covered it in a continuous adventure. On a map, the roughly U-shaped Ice Age Trail comes close to a few cities, including Milwaukee, Madison and Eau Claire.

Jason Dorgan, 45, of Madison, Wisconsin, is an ultramarathoner who has finished Death Valley’s Badwater 135-miler and lives less than two miles from an Ice Age Trail intersection. In 2007, to raise awareness and funds for the Ice Age Trail, Dorgan ran it in a record 22 days 6 hours. He is also race director of the Kettle Moraine 100 Endurance Runs in central Wisconsin, three hours northwest of Milwaukee. His favorite sections of the trail pass through pine forests. “They are smooth and covered with pine needles,” he says, “which make a soft running surface. And the trees also offer cool shade between the open grass meadows.”