In the northern Black Hills lies a lush valley thick with conifers that holds a tightly clustered tourist village called Deadwood. Some 139 years ago, when white prospectors first entered this valley—then the territory of the Lakota Sioux Indians—it was filled with its namesake, dead wood, leftovers from a recent, sweeping forest fire. Those prospectors found enough gold to incite a multi-year gold rush. During that time, life was rough and rowdy with gambling, fighting and prostitution (anyone watch the HBO TV series “Deadwood,” based on late-1800s life in the town?).

Nowadays, while the trees have grown  back and prostitution (but not gambling!)  has been outlawed, arriving at the village is akin to stepping back in time; Deadwood  retains its original character through  careful caretaking of its historic buildings and objects. Says Emily Wheeler, the 37-year-old race director for the Deadwood Mickelson Trail Marathon and the President of the Black Hills Runners Club, “Gunslingers like Wild Bill Hickok, Calamity Jane and other outlaws roamed here. You can see—and feel—Deadwood’s deep history when you walk its cobblestone streets.”

She continues, “And when you look beyond Deadwood and out into the hills, it still feels Wild, Wild West-like.” That’s because the region is largely protected and preserved as the enormous 1.25-million-acre Black Hills National Forest as well as other federal and state lands. “In the forest, there are literally thousands of miles of trails,” says Wheeler. 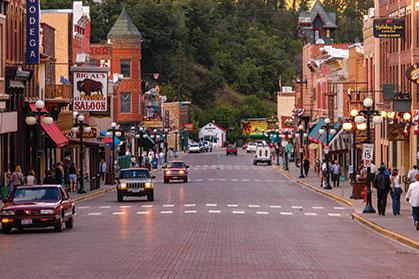 > GET THERE / An hour southeast of Deadwood, Rapid City Regional Airport is the closest airport. No mass transit companies serve Deadwood.

> BE A TOURIST/ The entire town of Deadwood is on the national register of Historic places, so visit and embrace history! Start with Tatanka, a Native American interpretive center, then tour the Adams Museum, where you can learn about Deadwood’s gold-rush days. Finally, visit the mount Moriah Cemetery to “meet” some crazy characters who spent time in Deadwood.

> TAKE NOTE / The Sturgis Motorcycle Rally takes place the first full week of August each year in the town of Sturgis, near Deadwood. Hundreds of thousands of attendees fill the roads, hotels and other tourist establishments of the black Hills area, making unrelated tourism challenging.

1874 Year gold was discovered in Deadwood gulch. Thousands of prospectors came to the valley in 1875 and 1876 in the black Hills gold rush.

326 Number of finishers at the 2013 Deadwood Mickelson Trail marathon (1927 people completed the accompanying Half marathon). 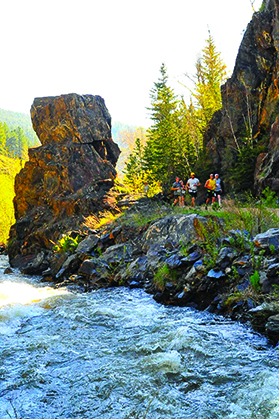 This event happens in June on the dirt, rails-to-trails George S. Mickelson Trail. The course gradually climbs about 800 feet in the race’s first half, and then plummets around 1500 feet in the second half. The half- marathon runs the second half of the marathon course (deadwoodmickelsontrailmarathon.com).

> BLACK HILLS 100-MILE, 100K AND 50-MILE / Each of the June races is out-and-back on the centennial Trail from Sturgis, which is located about 14 miles northeast of Deadwood. The singletrack centennial Trail is always turning, curving, climbing or descending through the conifer- dominated and remote black Hills (blackhills100.com).

> CENTENNIAL  TRAIL / For a more intimate, winding, technical singletrack experience with the black Hills, try the 111-mile centennial Trail, which also travels north-to-south. a short distance east of nearby Sturgis, access the trail via the fort Meade Trailhead, 12.5 miles south of the trail’s northern terminus.