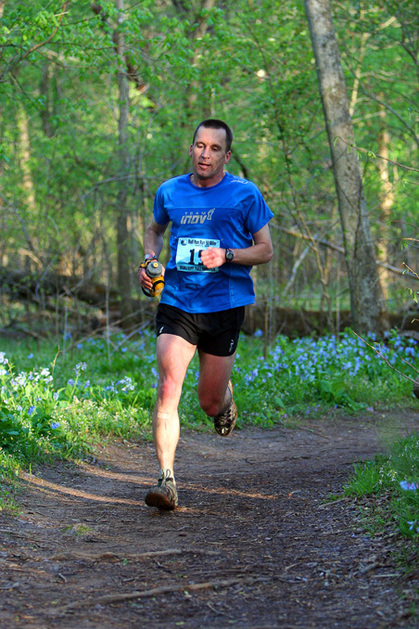 The term “trail running” conjures thoughts of wide-open spaces, nature, serenity and letting go. It is odd to think that congested and politically charged Washington D.C., and the surrounding area, is home to a treasure trove of forest trails and robust trail-running community, but that is exactly the case.

For starters, the trails weaving and connecting in, out, around and through neighborhoods and parks in the D.C. city limits are a treasure—a national treasure at that. Many trail miles in D.C. are located in National Parks. Rock Creek Park, the Potomac Heritage Trail, The Chesapeake and Ohio (C&O) Canal Towpath, Anacostia Park and the open space and paths surrounding the National Mall and Memorial Parks, to name just a few, boast tremendous, well-maintained, conveniently accessible trails.

“The trails are always empty. [At times] you feel like you’re in the middle of the Shenandoah, with no sign of the city,” says local trail speedster Sean Andrish. “It’s amazing to have that kind of escape right in the heart of D.C. and then pop back out into civilization for post-run beer and pizza.”

The trails are mildly technical in some parts and deceivingly torturous in others. Bring your game if you intend to blaze Rock Creek Park’s Valley Trail, for example. The undulating, narrow singletrack bluff trails make for a fun ride but the rocks and the hills will wear you down. The irony of this trail is you will see more runners than hikers.

On the other hand, says Andrish, “The most technically difficult trail in D.C. is the Potomac Heritage Trail. It doesn’t have the longer climbs found in the mountains west of D.C., but requires the same level of concentration as running in Shenandoah National Park and on the Appalachian Trail. Lose your focus for a moment, and come home with bloody knees.”

On D.C.’s trails, you might catch glimpses of East Coast trail-running phenoms, like Michael Wardian (three-time USATF Ultra Runner of the Year), Matt Woods (winner of Mad City 100K), Keith Knipling (11-time Massanutten Mountain 100 finisher), Aaron Schwartzbard (third place at Massanutten Mountain 100), Justine Morrison (first at Promise Land, Terrapin Mountain and Holiday Lake 50Ks in 2010) and Martha Nelson (VHTRC women’s half-marathon course-record holder). In fact, these runners, and hundreds more, are linked not just by the common love of trail running, or post-run pizza, but also through the Virginia Happy Trails Running Club, or VHTRC. If you haven’t heard of the VHTRC, odds are you’ve heard of one of the club’s premier trail races.

Even deeper within the annals of VHTRC breathes a more loosely organized, though tightly bound, assembly of trail addicts known as the Woodley Ultra Society, or WUS. This posse includes the aforementioned runners and many others who regularly show up at trail races and deliver respectable finishes. WUS is a noun, though it is also commonly used as a verb … as in, trail runners congregate at Kerry Owens’ Woodley abode on Tuesday nights and WUS in Rock Creek Park. Keith Knipling’s wife, Tracey, has another name for this motley crew: The Flashlight People.

Matt Woods likes to WUS. Running D.C. trails helped him deliver a first-place finish at the Washington D.C. North Face Endurance Challenge 50 Mile trail race last June, followed up by a 15th-place finish at the San Francisco 50 Mile Championship race in December. In between, Woods finished 12th at the 100K World Championships in Gibraltar, Spain, in November, helping Team USA bring home team silver. “I can have higher mileage and quality workouts when I include trails in my training mix,” says Woods. “I’m a trail fiend before anything else.”

And while the city trails provide a proven training ground, for the weekend warrior, the Blue Ridge, Massanutten and Allegheny mountains of Virginia, Maryland, West Virginia and Pennsylvania are less than two hours’ driving from the heart of downtown, and offer a lifetime’s worth of trail runs.

Massanutten Mountain Trail 100, May 14-15, 2011, George Washington National Forest, Shenandoah Valley, Virginia. They say “Massanutten ROCKS” and if you ever step foot on these technical trails you will know why. 100 miles and 18,000 feet of climbing, while dancing over rocks, feels more like 150 miles. The course follows a portion of Massanutten Mountain ridgeline in a giant loop, in part circling the rural farmland of Fort Valley. Expect steep climbs and gnarly descents. Karl Meltzer calls Massanutten a “fun ride.” Enjoy Shenandoah Valley and River vistas, wildflowers and spunky aid stations. Lottery registration opened December 1. www.vhtrc.org

Potomac Heritage 50K, first weekend in November. Under fall colors, this race blends single- and doubletrack city park trails, the C&O canal towpath and the hilly and technical Potomac Heritage Trail in Washington D.C. and Virginia. The out-and-back course offers a laid-back option for runners not chasing marathon pavement in early November. The hills (and wet shoes) begin after crossing the Potomac River for the first time. Catch more glimpses of Georgetown, National Monuments and the Potomac River. The best part is the party at Kerry Owens’ house afterwards. Bring a change of clothes, and be sure to meet Gary Knipling. Registration is free, opens whenever Kerry gets around to it and fills quickly. www.vhtrc.org

Women’s Trail Half Marathon, second weekend in September, Bull Run Park, Northern Virginia. VHTRC authority had the best intentions when they took the most notorious section of the Bull Run Run 50 trail, the famous “Do Loop,” and presented it to women in the form of a trail half marathon. Hard-packed, woodland-carving rolling singletrack trails make for speedy finish times. Look out guys; these gals are fast! Registration opens in July. www.vhtrc.org

Rock Creek Park. Single- and doubletrack trails go for miles in this 2000-acre, inner-city gem. The roads close on weekends and holidays from dusk to dawn and are a great place for family and outdoor activities of all sorts.

What is it about D.C. that makes it such a hub for trail running?

I’m fascinated by the fact that the D.C. area has a large amount of strong trail runners. Close proximity and variety [of trails] play a huge factor. The most significant factor, though, is friends or family who have been consistently involved with trail running. My sister pushed me into trail running early on, and took me to the 2008 Red Eye VHTRC trail run at Prince William Forest. A few weeks later I ran my first ultra at the VHTRC Eagle Run.

VHRTC is very welcoming to runners at any level, and is an excellent outlet for getting connected to other trail runners. VHRTC also provides great resources for places to run.

What will be your next VHTRC race?

I would like to race Bull Run Run 50 Mile this year. I spend a fair amount of my time training on those trails and it would be interesting to race on them.

Where is your favorite stash of trails in the D.C. area?

Laurel Hill and Giles Run trails in Lorton, Virginia. The topography works well for very fast trail running. I look forward to the day that a race is held on those trails.

What does the future hold for D.C. trail running and racing?

A fair amount of running-news outlets are helping expand trail running. I think that more locals will begin training and racing on trails. I really hope to see more ultra races pop up.

What are your trail racing goals in 2011?

I’m interested in running the Rocky Raccoon 100. Beyond that, my trail-racing goals are to set new PRs and continue performing well at a competitive level.

What do you do when you’re not running?

I am in park management, which involves trail construction and maintenance. Plus I can throw on some running clothes, walk out the door of my office and go for a trail run.