A trail runner's guide to Lake Placid, New York, a mountain-sports mecca in the Adirondacks. 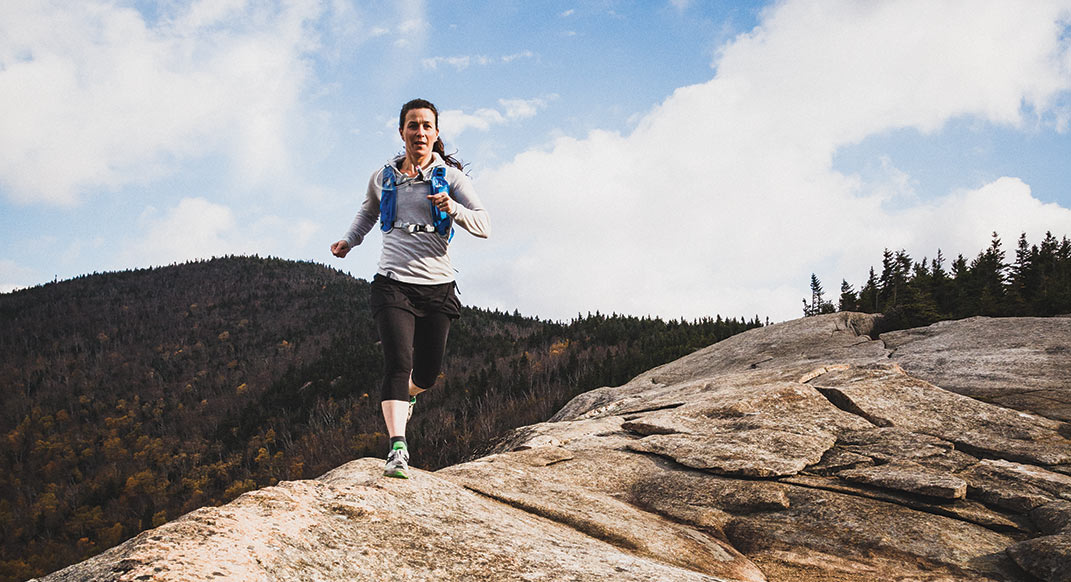 Jackie Arevalo running on the Pitchoff Traverse in the Adirondacks. Photo by Louis Arevalo

At 6.1 million acres, Adirondack Park houses more than 10,000 lakes, 30,000 miles of rivers and streams, 2,000 miles of trails and all of the Adirondacks’ High Peaks—the 46 peaks originally believed to rise 4,000 feet or higher above sea level. (Four actually weren’t that tall and one that wasn’t included should have been, but the name stuck.) In an unusual format for an American park, Adirondack Park is also composed of about half private land and more than 100 towns, including Lake Placid.

For most people outside the region, the town of Lake Placid was put on the map as a result of being a two-time Winter Olympic Games host, in 1932 and 1980. These days, the Adirondack Mountains are home to outdoor recreationists of all kinds, including a growing number of trail runners.

Says Jan Wellford, the Whiteface Sky Races co-race director, “Between Lake Placid and its neighboring towns of Keene Valley and Wilmington, trail runners have access to all of the most classic High Peaks trails, beautifully maintained mountain-bike trails and many miles of scenic dirt roads.”

In addition to the plethora of extant trails in the area, the Barkeater Trails Alliance continues to develop multi-use trails in Lake Placid, and the Whiteface Sky Races in nearby Wilmington draw national-class mountain runners each summer. The secret is, thus, emerging: Lake Placid is a portal for Adirondacks trail running.

Marcy Dam Truck Trail / A rolling cross-country ski trail by winter and hiking trail by summer offering a seven-ish-mile out-and-back, with plenty of opportunity to extend your run.

Northville-Lake Placid Trail / Laid out by the Adirondack Mountain Club in 1922 and 1923, the trail travels 136 miles through the Adirondacks and offers magnificent views of the region’s High Peaks and lakes, as well as days of running.

Mount Colden via Avalanche Pass Trail / A strenuous, 13.4-mile lollipop that passes over Avalanche Pass en route to the summit of 4,715-foot Mount Colden. Jan Wellford calls this “one of the iconic trails accessible from the main trailhead in Lake Placid.”

Great Adirondack Trail Run / Held in nearby Keene Valley in June, this 11.5-mile point-to-point has 2,900 feet of climb, and fires off its runners at a one-per-minute interval in a time-trial format. There’s also a 3.5-mile fun run. The Adirondacks are known as a place where self-sufficiency is required, and this race perpetuates that spirit with no aid stations.

ADK 80K / Starting and ending just south of Lake Placid in Mount Van Hoevenberg, the ADK offers something for everyone. Try the 80K or 50K solo ultras or the 80K relay with two or four runners. There are also mountain-bike and duathlon events. The races navigate a 20-kilometer, figure-eight loop on Nordic ski trails used for the 1980 Winter Olympics.

Whiteface Sky Races. This event hosts two races, a 2.5-mile vertical kilometer that ascends 3,300 feet, and a 19-mile event with 9,000 feet of climb, at Whiteface Mountain. Whiteface Mountain is the fifth-highest High Peak in the Adirondacks.

Get There / Lake Placid is surprisingly accessible. Flights to Adirondack Regional Airport bring visitors within 16 miles of Lake Placid, and Amtrak serves nearby Westport, where travelers can rent a car for the remaining 40-mile drive.

Play Tourist / Tour the Lake Placid Winter Olympics Museum and many of the Olympic sites, including the Lake Placid Olympic Jumping Complex and the Lake Placid Bobsled and Luge Complex. For a price, take a half-mile bobsled ride on the actual Olympic track. That’s an adrenaline rush of Olympic proportion!

Take Note / Lake Placid swells with thousands of athletes in July during Ironman Lake Placid. Note the date on your calendar and visit another weekend to avoid crowds. Also, snow! Lake Placid receives over 100 inches of it each year, mainly between December and March. If you travel the trails during the winter, bring snowshoes or other traction devices.

For 95 Straight Days, Alyssa Clark Ran A Marathon, Setting A...