Left out of Hardrock? Welcome to the club. Try one of these six other San Juan mountain races instead. 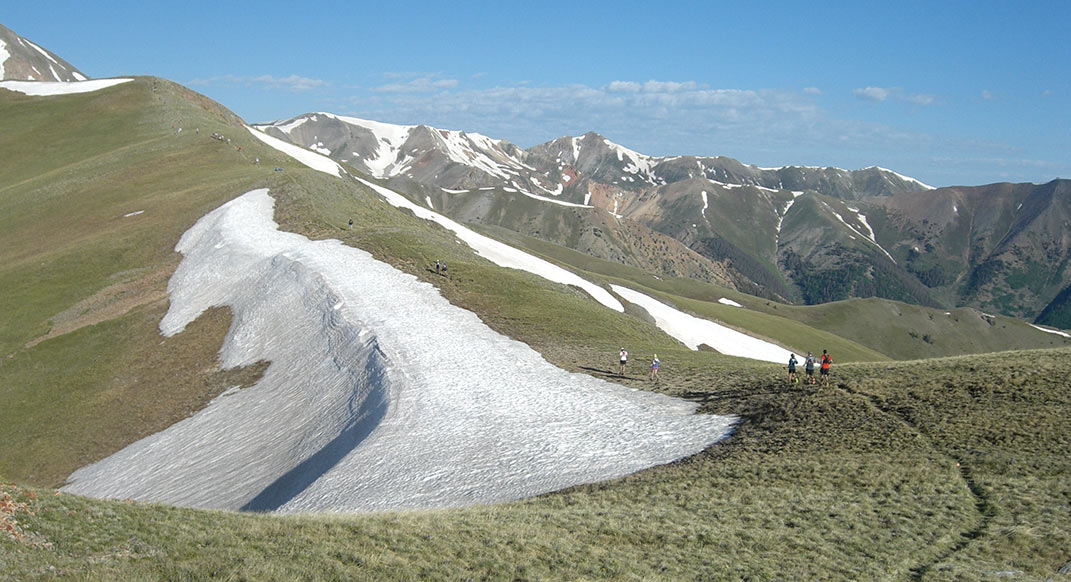 Silverton’s famed Hardrock 100 has all the elements mountain ultrarunners could ask for: huge vert, astounding views, history, prestige and challenge. It is, like its slogan says, wild and tough.

But on lottery-selection day, most applicants will have to accept disappointment. Face it: You probably won’t get in.

According to race director Dale Garland, in 2016, about 1,600 people applied for just 152 spots. Hardrock recently announced that the number of 2017 starters will be even smaller: 145.

The good news is that there are a handful of other races in southern Colorado’s San Juan Mountains that showcase the same high-altitude, rugged remoteness and beauty of Hardrock. While you hang out on the Hardrock waitlist, try one of the following six races for a taste of what you’re missing.

In the summer of 2013, Houston transplant Charles Johnston had his wife drop him off in Ouray at the start of the Imogene Pass Run (see below). He hiked the course just for fun, his first exposure to the San Juan Mountains. When she picked him up 17 miles later in Telluride, Johnston was inspired.

“I was taken aback that it was that beautiful,” he says. “I think you would have to leave the continental U.S. to see something more magnificent than you can see in the San Juans … I had been running my whole life, but after that little hike, it just kind of planted the seed.”

From that seed grew the Ouray 100 Mile Endurance Run. With 83,724 feet of elevation change over 102 miles (compared with Hardrock’s 66,100) it puts Ouray right up there with some of the most challenging 100s in the world. The relentlessly technical terrain combined with the near certainty of August thunderstorms make for something like a 20-percent finish rate.

The course covers some of Ouray’s most iconic and popular hiking trails and destinations: Perimeter Trail, Bridge of Heaven, Weehawken, Chief Ouray Mine, Chicago Tunnel, Fort Peabody and Crystal Lake. Much of the course features out-and-back style tagging of landmarks and hole-punching your bib to prove you were there.

Since its inaugural year, Johnston has added a 50-mile distance and changed the course a bit to include more singletrack and fewer Jeep roads, a move that also increased the difficulty. But he likes the course the way it is and has no plans to ease up. If they have trained and prepared adequately, most 100-mile runners have a pretty good chance of finishing a race. Not so at the Ouray 100.

“I think it’s on the razor edge of what a non-elite athlete can be capable of,” Johnston says.

The San Juan Solstice is the region’s premier 50-mile race. Held in June during that fleeting sweet spot between too much lingering spring snow and the summer monsoons, the race features all the best adventures of mountain running: stream crossings, ridge running, snowfield glissading, big climbs and even bigger views. The loop begins and ends in Lake City and has about 10,500 feet of climbing.

One highlight of the San Juan Solstice is what feels like a million stream crossings on the first climb, in Alpine Gulch. You can expect your feet to be wet—and maybe more, since several of these crossings are waist-high with spring runoff and have ropes strung from one side to the other to help you across.

Another highlight is the nine-mile segment along the Continental Divide, which parallels the Colorado Trail. This ridge offers magnificent views, but be aware of potential afternoon thunderstorms on this exposed section.

This race, which is a fundraiser for the Lake City volunteer EMTs, has become more popular and recently moved to a lottery system for entrants. But race director Jerry Grey is pleased that, so far, everyone who has been waitlisted has made it into the race, and that the field is made up of nearly half first-timers.

The good news about the 17-mile Imogene Pass Run is that there is just one climb. The bad news is that that climb is 5,300 feet in 10 miles and tops out at 13,114 feet above sea level. In other words, this lung-buster of a race isn’t for the faint of heart.

The race, which connects the former mining towns of Ouray and Telluride by way of Jeep roads, over Imogene Pass, was inspired by the legendary mountain runner Rick Trujillo. In 1974, as a training run for the Pikes Peak Marathon, Trujillo ran from Ouray to Telluride via the pass, after putting in a full day’s work at the Camp Bird Mine. Soon after, the formal race was established, albeit with just six participants. From those humble beginnings, the IPR now has about 1,200 runners each year.

This is a grueling, high-altitude run with heart-breaking false summits and the potential for bad weather, but what you won’t feel on this course is lonely. In addition to your fellow runners, people wearing giant bird costumes welcome you to the five-mile aid station at Lower Camp Bird and volunteers are waiting at the top of the pass with a helping hand to hoist runners up to the road.

The summit is packed with supporters, aid-station workers and search-and-rescue volunteers. The two miles down to the ghost town of Tomboy are steep and rocky, but after that the road flattens and the footing improves for a fast, quad-burning, five-mile downhill to the finish-line crowds in Telluride.

New as of summer 2015, the Telluride Box Canyon Running Series consists of three races that take place at the end of July — plus one in late September amid the blazing aspens — on the rugged trails surrounding the former mining town.

The July race day features a 25K loop through wildflower-strewn Bridal Veil Basin, a nine-mile run through the lofty and remote Bear Creek Basin and the Box Canyon 55, an epic 55-mile loop with 20,000 feet of elevation gain, which links old mining trails and mountain passes through high-alpine basins, scree fields and single track.

The series, and especially the 55-mile race, is the brainchild of Ricky Denesik, a local mountain runner who made the transition from competitor to race director with this series. He has completed Hardrock seven times, notching a win in 1998, and sits on the event’s board of directors.

“I wanted something that is very challenging for the area we live in,” he says of the Box Canyon 55. “It’s kind of modeled after the Hardrock.”

You can cap off your summer of running with the series’s Deep Creek Trail Half Marathon, which takes place at the end of September. In this point-to-point race, runners make their way from the Telluride airport to the finish line in the town.

Taken together, the four races of the Telluride Box Canyon Running Series showcase the best terrain, scenery and spirit of the San Juans.

Silverton’s Kendall Mountain Run began like all great athletic competitions: with a bar bet. In 1908, hardrock mining’s heyday, miners bet on who could run to the top of 13,066-foot Kendall Mountain via an avalanche chute and back in less than an hour and 30 minutes. After a few attempts and a snowstorm casualty, the contest was abandoned for the next 60 years.

Trujillo—the inspiration behind the Imogene Pass Run—resurrected the contest in the late 1970s, breaking the previous record of his miner forebears. Today’s version of the course opts for the safer route up the jeep road.

“Miners were racing up and down this mountain,” says Kendall Mountain race director Jamil Coury. “It’s just such a simple concept. I think there’s something pure about it. That, and it’s just stunningly beautiful up there.”

Traditionally held the Saturday after Hardrock, the Kendall Mountain Run is a 12-mile out-and-back that begins at Silverton’s historical Grand Imperial Hotel and ends in Memorial Park. In between are 3,750 feet of vert, including a scramble for the final 300 feet to the summit.

Its proximity to Hardrock means there are usually still some great athletes in town; in 2016 Dakota Jones and Emelie Forsberg were the men’s and women’s winners. The race is also part of the US Skyrunner Series and in 2016 featured a prize purse of $2,500.

The Kendall Mountain Run is not the only race Coury and his organization, Aravaipa Running, put on in Silverton. In August, the town hosts the Silverton Alpine Marathon and 50K and the Silverton 1,000 Multiday.

At the end of September, hand-drawn posters begin appearing around Telluride, advertising the Ophir Pass Hill Climb. The posters are like the event itself: simple, low-key, rough around the edges and created by locals.

The concept is straightforward: Show up at the Ophir Town Hall, 13 miles from Telluride, on the first (or sometimes second; check the posters) Sunday in October and give race organizer Pete Dahle $10, which goes toward the keg and food at the after-party. Then run three rocky miles and 2,500 vertical feet to the top of 11,987-foot Ophir Pass alongside mountain bikers, dogs and people towing kids in bike trailers.

Ophir may be tiny (population: 160), but it is inhabited by hardcore, scrappy mountain athletes who turn out en masse for this event. The Hill Climb is a no-frills sufferfest, perfect for mountain purists who have an aversion to the formalities of racing. (One of the rules is no compression socks allowed.) Runners are greeted at the top not with finisher medals and sports drinks, but with a blast of icy air from the invariably windy Silverton side of the saddle.

But you can also count on high-fives from fellow participants and swigs from shared PBR tallboys smuggled to the top. The few extra ounces of weight are well worth the celebratory camaraderie of cracking open a cold one. That’s the whole spirit of the event—the anti-race race.

Schlarb is wearing compression socks in the photo at Ophir though.