A Slice of the Mountains: The Creede Mountain Run 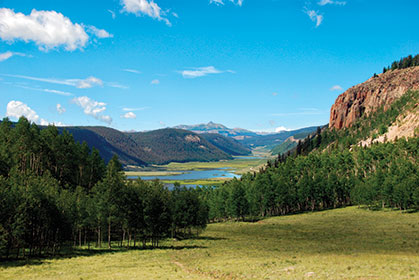 Heartbreak Hill, Neverending Valley, The Black Pitch—the names that subdivide the course of Colorado’s 22-mile Creede Mountain Run are brutally apt, and none more so than The Ladders. This final climb to the race’s 12,500-foot turnaround, on talus-filled doubletrack, would need rungs if it got any steeper.

“I have gone up that in a four-wheel-drive vehicle, and it scares me belted in a  seat,” says Debbie Wylesky, who stepped down as race director last year. “I can’t even imagine running it.” From the vantage point of the aid station below, she says, ascending racers look like they’re running in place.

Now in its 28th year, the Creede Mountain Run passes through the old mining country of the San Juan Mountains. It features towering rock formations, waterfalls and expansive valley views as it climbs, then descends, some 4,000 feet on progressively more rugged jeep roads.

The race also has a distinct local charm that brings runners back year after year. Creede, perched at 8,850 feet, has a population of around 300, and most citizens get involved on race day, as runners, volunteers or EMTs.

“It’s very Euro style, in that you start and end in the town,” says Trail Runner’s own Jeremy Duncan, 33, who finished a close second at last year’s race. (There are also 12- and two-mile options.) Duncan adds that the aid stations and course markings are what you’d expect from a higher-profile (and more expensive) race, but the Creede Mountain Run nonetheless retains its “homegrown” feel. The aid stations are amply stocked with water, M&Ms, bananas and orange slices, and the packets, picked up at the race start behind the local store, come in plastic grocery bags.

The region’s industrial heritage is on display as well. Old mining structures and abandoned equipment line the course, and, in place of medals, runners receive amethyst “finishers’ stones,” straight from the local mines. As Wylesky says, “We offer a slice of the mountains.”

$25; creedemountainrun.com
(or in person on race day)

Fly into Alamosa, Gunnison or Durango, and rent a car. Grand Junction and Denver are about five hours’ drive.

In town, the historic Creede Hotel offers B&B-style lodging. Cabins can be rented at various nearby ranches. Tent and RV camping is available in plenty.

Make It a Weekend

Labor Day Weekend in Creede is packed with activity.

>Sample homemade salsas and vote for your favorites at the Salsa Fiesta, held at local businesses.

>Take in the views from above by riding a hot-air balloon during Creede’s annual Balloon Festival.

>Cheer on racers of a different sport during the soapbox-car Gravity Derby or ATV Rodeo.

Creede, By the Numbers

$8 cost of a ticket to the race-day salsa festival

This article originally appeared in our July 2015 issue.