1 / Cirque of the Towers

There was little pre-planning, nothing more than a short series of texts. It went something like this: “I have a couple days free, what are you doing this weekend?”

I knew nearly nothing about running in Wyoming’s Wind River Range. I did know there was climbing, lots of it. I had heard of massive granite monoliths, jagged skylines and few people. Most of the stories I was familiar with were either multi-day climbing trips with long approaches, or week-long backpacking journeys. I knew there were bears, that it was far less visited than the Tetons to the north and that it sounded like a great place for adventurous running.

After rendezvousing near the Big Sandy Trailhead with my friend Fred Marmsater, a photographer based in Boulder, Colorado, we leaned over the table in his camper piecing together a roughly 25-mile loop that would drop into the fabled Cirque of the Towers.

The Cirque holds a certain lore for me. I had seen pictures of soaring spires and peaks, walls of granite dominating the view in all directions, and heard rumors of wild weather and wildlife encounters. Our route would travel north from the trailhead, along the Continental Divide Trail, until just past Marms Lake, where we would turn west toward Shadow Lake and the Cirque. Our hope was to cross a saddle north of the Wolf’s Head, but the route was unknown to us both.

We awoke to leaden skies, shouldered packs and committed to a full day of adventure. The rain came in waves all day, with short breaks. Occasionally, it snowed. We ran past countless lakes, crossed streams, boulder hopped and scrambled into the heart of the southern Wind River Range. The first view into the Cirque stopped me dead in my tracks. The pictures I’d seen came nowhere near capturing the rugged beauty laid out before us.

Three backpackers, a group of eight Boy Scouts and a couple of climbers all reacted with similar looks of surprise when they saw Fred and me. Obviously, they had worked really hard to get to this remote, wild place. What were these two guys, in short running shorts and windbreakers, with tiny packs, doing all the way out here?

“It’s unnatural,” stated one of the climbers as she shared crackers smothered in nut butter, “to be out here with so little stuff!”

For our second day of running in the Winds, Fred and I set our sights on Gannett Peak (13,809 feet), the tallest mountain in Wyoming, a solid 20 miles in from the trailhead. After our previous day’s run to the Cirque of the Towers, we loaded up and drove north to Elkhart Park, where we camped before setting out well before sunrise the next day.

Running in the small cone of light of my headlamp, bear spray in the front pocket of my running pack and my mind still foggy, had me questioning the sanity of our plan. The subtle clank, clank, clank of my ice axe distracted me from thinking about how far we had to go and transported me back to the moment.

After hours of running, the sun peeked up from behind the peaks, and we were once again surrounded the type of scenery that dreams are made of, as we worked our way into Titcomb Basin en route to Bonney Pass.

Standing on the top of Bonney Pass, ice axe in hand, I stared at our still-far-off objective of Gannett Peak. The new snow from yesterday’s storm plus freezing temps overnight had pushed our limits on the exposed terrain. Alas, it wasn’t the day. We bailed.

Not long after turning around, we crossed paths with a group of mountaineers at the base of the glacier we had just descended. They looked like they had been plucked from the pages of the old mountaineering how-to book The Freedom of the Hills. They paused their forward plodding and waved, with a look of confusion and envy as we drifted by.

This article originally appeared in our April 2016/DIRT issue. 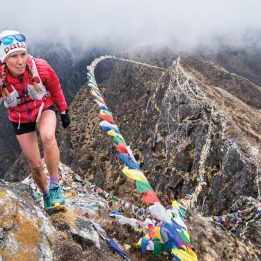