The mysterious kid on the trail block 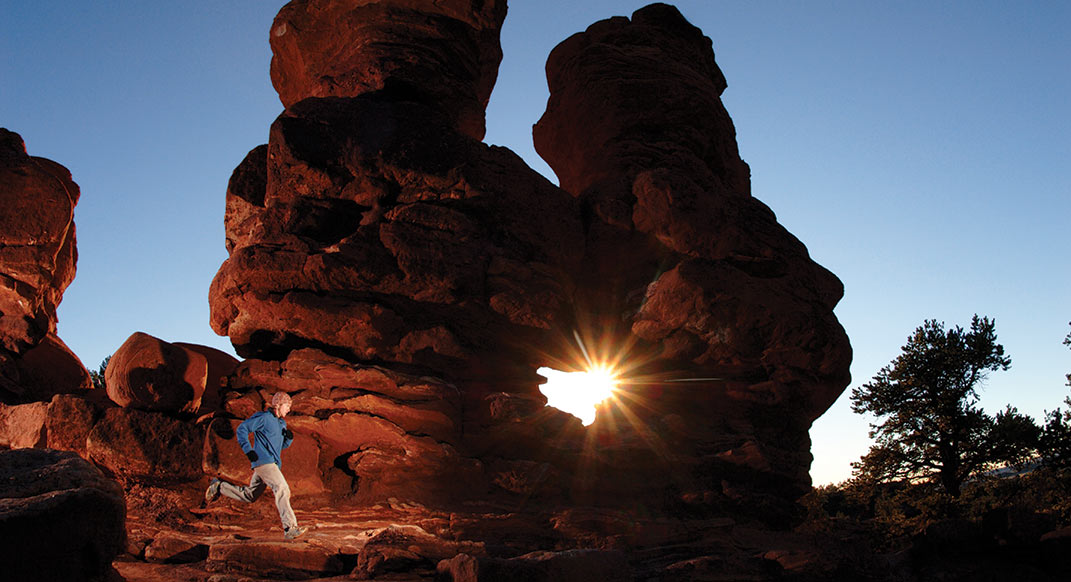 Running through the surreal rock formations of the Garden of the Gods. Photo: Aurora Photos

If Denver and Boulder are the cool kids of the Colorado Front Range, then Colorado Springs is the quiet child. With literally hundreds of singletrack miles within minutes of town and the hulking 14,115-foot Pikes Peak at the city’s western margin, the outdoor bounty of “The Springs” is no secret to a passel of local trail runners ranging from the hyper elite to the recreational warrior.

Justin Ricks, an elite-level trail runner, race director and coach, and his family chose to live in The Springs for the trails and much more: “There is access to trails, no matter where you are in town. The trail-running community is tight knit. Matt Carpenter’s Incline Club gathers on Sundays, and Team CRUD is a fun group. There is also a large group of competitive athletes who train together.”  Get to know the quiet kid on the block!

> North Cheyenne Cañon Park / Says Justin Ricks of this city park: “For a trail beginner, I would suggest Cheyenne Cañon. The trails are made of decomposed granite, so they are smooth and easy to run. There are amazing views of the city, some great geological formations and a creek with beautiful waterfalls.”

> The Barr Trail / The Barr Trail is a trail icon that began as a way to access mining areas on Pikes Peak and later evolved into a tourist trail. It starts in downtown Manitou Springs, a little tourist town just west of The Springs, and climbs to Pikes Peak’s summit in 12.6 miles and 7,400-plus feet of vertical gain. 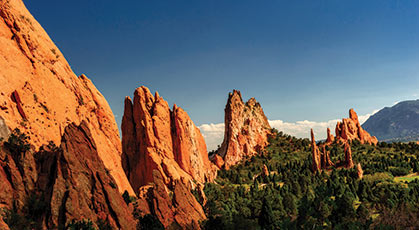 > Pikes Peak Ultra / New in 2015, this 50-mile event and its 28-kilometer accompanying race take place on the quieter and lesser-known trails on the flanks of Pikes Peak.

> Get There / Colorado Springs is dissected by north-south Interstate 25, which runs along Colorado’s Front Range. The Springs has its own airport with multiple carriers flying in daily and car-rental agencies. The behemoth Denver International Airport is just 90 minutes north, too. Or, arrive to town via the public transport of Greyhound bus or the California Zephyr Amtrak line. However, you’re gonna need a pair of wheels for trailhead access.

> Play Tourist / Visit Garden of the Gods, a 1,300-acre city park containing red-sandstone fins and spires. There’s a visitor center, historical buildings and about 15 miles of singletrack. Pack a breakfast picnic and explore the park when early morning light turns the rock a fiery red, and get in a run on the trails while you’re here, too. Kids especially will love the steep, scenic Pikes Peak Cog Railway, which climbs Pikes Peak. We’re talking kitschy American tourism here, but it’ll inspire mountain awe in just about anyone.

> Take Note / Pikes Peak and the whole Colorado Springs region get hammered by the summer-thunderstorm season. Be off mountains by midday.

Hey,
Thanks for your great post. I search and see your post and i am interested to tour colorado springs. I want spent good time my family and get adventure. I am also discuss my husband he also excited go there. Please let me know about your colorado springs.