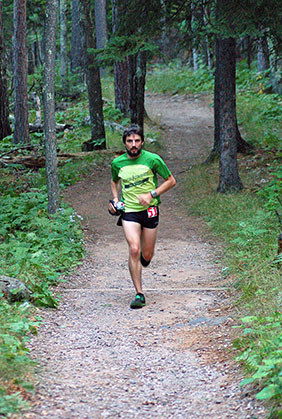 Marquette, Michigan, part of the Upper Peninsula (U.P.), is known for water, a la Lake Superior, and copious amounts of lake-effect snow during the winter for primo Nordic ski- ing. In the “off-season,” though, the town of about 21,000 is fast be- coming a trail-running mecca with nearly 100 miles of singletrack that stem right from downtown. The trails wind through lush, dense forests, across bald rock outcroppings and over strenuous, root-strewn climbs in the Huron Mountains. Nearby, sandy beaches and pine-needle-covered paths wind along Lake Superior.

Every August, the Marquette Trail 50K and 50-Mile races take place on the Noquemanon Trail Network (NTN), starting in the city limits of Marquette and traversing the Huron Mountains to the north. “There was a strong need for a long endurance race in Marquette,” says race director Andrew Grosvenor, who took over the race in 2011 from race founder and local legend ultrarunner, Joe Jameson.

New this year, the race has added a 50K relay option, so runners can create teams of two to four to cover the distance. The relay will take place the day before the solo events.

Starting 600 feet above sea level with over 3500 feet of elevation gain and loss in the 50K—and slightly more in the 50-mile—the course summits Sugarloaf, Top-o-the-World, Bareback and Hogsback peaks. All are part of the local Huron Mountains, where boreal vegetation surrounds glistening rock faces and old-growth forests of hemlock, hardwoods and pine- oak evoke the feeling of running through the hills of Scotland.

“We purposely picked some of the more challenging trail sections with rocks, roots, moss, mud and narrow boardwalks over marshes,” says Grosvenor. The next land north of Marquette, across Lake Superior, is Canada—so he adds, “You might feel a sense of remoteness because of the great northern latitude.” Although Superior is always near, runners catch only glimpses of it along a few miles of the trail and from atop the various peaks—a reward for making it up the climbs.

Despite its rugged nature, the course is mostly runnable save the climb up Hogsback, which Marquette Trail 50-Mile record holder (6:53) Nick Lewis of Memphis, Tennessee, describes as “one of the hardest miles in an ultra that I’ve ever completed.” The chance of catching a toe or careening into the trees is also an ever-present threat on the numerous narrow, rocky sections.

Setting a high standard for trail building and maintenance, the NTN has plans to build over 100 miles of new, environmentally stable trails—designed to shed water and avoid ruts—by 2020.

It is a good sign of things to come for trail users—challenging route patterns and new opportunities for local races. Improvements in this year’s race, says Grosvenor, include more singletrack and no repeated trail sections in the 50K. He’s optimistic that as the NTN continues improving the local trail systems, Marquette will continue drawing enthusiastic trail runners in search of beauty.

“As long as my wife lets me do this,” says Grosvenor with a smile, “the Marquette 50 will only get stronger and better. Both races fill up every year, which is a solid testament that the word is getting out.” Currently, the solo races are full, but runners can contact Grosvenor to be added to a wait list.

The beginner-friendly course features plenty of aid stations and cruiser trail sections. Embodying Northern ruggedness, its climbs provide a nice change of pace to emphasize different muscle groups—but in a show of mercy to its runners, no single climb or descent is long enough to burn out muscles. After the 2012 race, first-time 50K runner Christo Miner of Traverse City, Michigan, said, “I’ll be back. I’m used to running road marathons but now I see the light.” 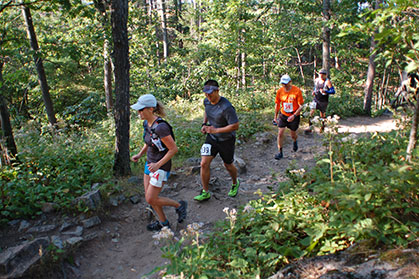 > Race Logistics
Choose from a 50K or 50-mile solo singletrack race (they start together) or get a team together for the new 50K relay the Friday before the solo events. www.marquettetrail50.com

> Getting There
Fly or drive into Marquette— about three and a half hours from Green Bay, or approximately seven hours from Detroit, Chicago or Minneapolis.

An approximate 10-mile singletrack loop starts from the trailhead at the end of Chapel Road inside the National Lake Shore near Munising. Explore forested trails and steep cliffs along- side Lake Superior.

If you have the time and inclination (well, maybe not after a 50K or 50-mile race), getting to Isle Royale in Lake Superior via boat or floatplane is worth the trip. Go out of Houghton or Grand Marias, MN. Enjoy a rugged 30-mile singletrack loop on the island with stunning views of Lake Superior and rock formations.

This approximate seven-mile loop trail starts near Marquette, and show- cases a river crossing, gentle steeps and undulating singletrack alongside the gurgling Carp River.

This approximate six-mile out-and- back section passes underneath pines and meanders along Lake Superior beaches. A perfect post-run or next day “cool- down” jaunt. Soak in cold Superior water afterward.