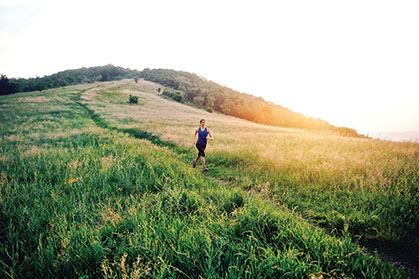 It’s all David Horton’s fault that Lynchburg makes our list of top trail towns. The 63-year-old ultra-endurance icon has lived there for 34 years while working as a Professor of Exercise Science at Liberty University, the 13,000-student institution in the heart of town. And during that same time, he’s built dozens of miles of trails, performed maintenance on others, designed and directed races and taught running classes at the university. Thanks to him, a booming trail-running culture has evolved in this medium-sized town where there once was none.

But visitors soon learn that there is more to Lynchburg than a college town  with a running hobby. Chartered in 1786,  Lynchburg served as a Confederate supply base during the Civil War and then as a booming manufacturing town beginning in the late 1800s. West of town, the Blue Ridge Mountains rise 3,000-plus feet into their forested and, well, blue-tinged ridges. Trails, including the famed Appalachian Trail (AT), abound in and just outside of Lynchburg as well as in the Blue Ridge Mountains.

The population is young due to the university and other area colleges, and cost of living is low. “The climate is exquisite, except for deep summer, and we can trail run all year, unlike places like Colorado that get snowed in,” says Horton. “We’re conservative. We have a low crime rate. We’re a perfect place for living and trail running.”

> GET THERE / Fly into the Lynchburg regional airport via one of the two daily flights on US Airways Express. You can also arrive via Amtrak on the northeast regional line or Greyhound bus, and then rent a car in Lynchburg. Washington D.C. and the airport is only three-and-a-half hours away.

> BE A TOURIST/ Start at  the Lynchburg museum. From there, wander through the  old city cemetery and take a walking tour of the city’s historic districts to experi ence the lives—and deaths—of Lynchburg’s former inhabitants. The performance arts are well evolved, so consider taking in a Lynchburg Symphony Orchestra performance or a theater show.

> TAKE NOTE / Horton cautions, “July and August weather is nasty, and I mean that with a capital ‘N.’” He’s talking about an over- abundance of both heat and humidity, which he says can only be escaped by “not being in Lynchburg.”

5 Number of days, in 1865, that Lynchburg served as the capital of Virginia, after the fall of Richmond and before the fall of the confederacy.

Number of actual miles (equal to 107 kilometers), according to David Horton, of the Hellgate “100k.” 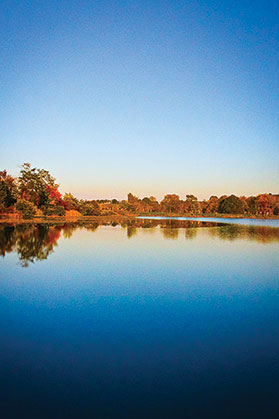 “At the core of everything in the Blue Ridge Mountains is the Appalachian Trail,” says Horton. “Use the at to create loops with other connecting trails like up in the Priest and Three Ridges Wilderness areas.” those Wilderness Areas are located an hour north of Lynchburg.

This in-town, 65-plus- mile trail system sits at the edge of Liberty University and was largely built over the years by Horton and his running classes. Use the old logging doubletrack with singletrack built for both bike and pedestrian use to string together a five- to-25-mile run through deciduous forests overlooking Lynchburg.

> PROMISE LAND 50K / “With 7400 feet of climbing, this is a serious 50k,” explains Horton, Promise Land’s race director. The April race takes place in the Blue Ridge Mountains a short distance west of Lynchburg, and the course is usually laden with spring wildflowers (extremeultrarunning.com).

> HELLGATE 100K / Starting at 12:01 a.m. on a December morning, this point-to-point race through the Blue Ridge Mountains is also directed by Horton and features what are called “Horton miles,” which basically means the race is longer than advertised. “Do this race when you’ve done all the others,” states Horton, proudly, about his graduate-level event (extremeultrarunning.com).

> LIBERTY MOUNTAIN TRAIL SERIES / A series of six short-distance trail races ranging from a 5k to a half-marathon put on by Liberty University student activities during the school year. The races are open to and popular with the public, and take place on the Liberty Mountain Trail System (liberty.edu/campusrec/studentactivities/index. cfm?PID=18161).