A trail runner's guide to the mountain mecca of Bishop, California. 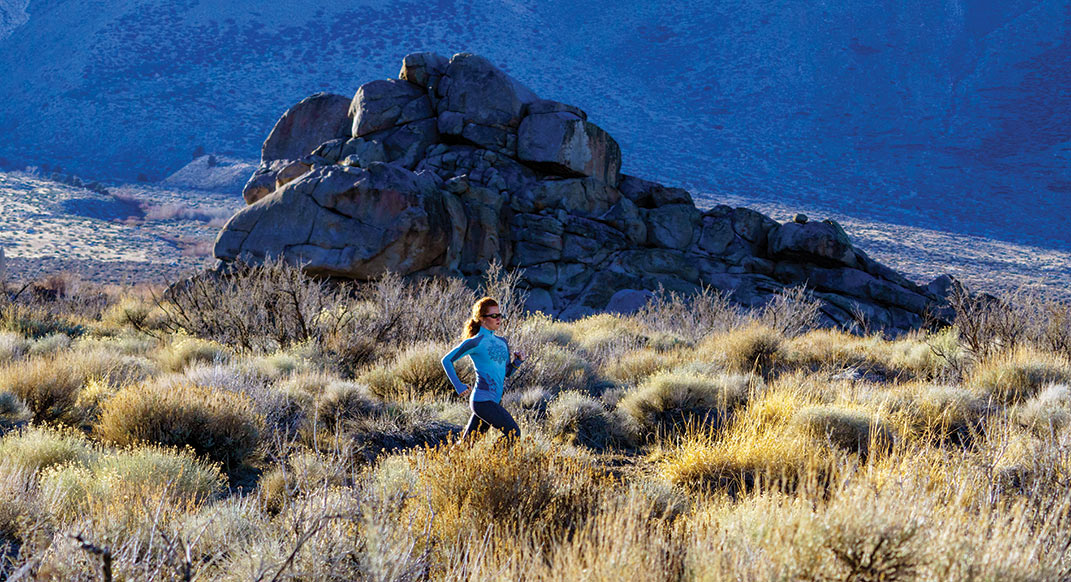 Nestled between the Sierra Nevada on the west and the White Mountains on the east, the Owens Valley offers all the mountain amenities. Photo by Michael McDermott

Bishop locals like to joke that they have a big backyard, and that is probably an understatement.

“The Owens Valley could be coined the Chamonix Valley of the Eastern Sierra,” says trail runner and physical therapist Tim Tollefson, who lives just uphill of Bishop in Mammoth Lakes, at the eastern margin of the Sierra Nevada. “The valley floor sits at 4,000 feet altitude, and the corridor is lined by 14,000-foot peaks along its east and west sides. With such huge vertical relief and no shortage of trailheads, the valley provides a lifetime of exploration and challenges.”

To Bishop’s west looms the hulking, snaggle-tooth Sierra Nevada, while the equally impressive White Mountains rise to the east. The diverse region proves a study in visual contrasts. While the heavily traveled Sierra Nevada’s glacier-polished white granite abuts turquoise lakes, the White Mountains’ arid moonscapes remain devoid of most living things, including other trail users. White or turquoise, a tourist haven or a range of solitude, arid or not, this is a backyard worth exploring.

Paiute Pass Trail / Paiute Pass is quintessentially Eastern Sierra, five miles and a bit under 2,000 vertical feet one way to the pass. Almost every step is runnable if you can manage the thin air—the trailhead is located at 9,200 feet. The trail continues on into the backcountry, but returning from the pass makes a wonderful Sierra starter as you’ll quickly be smack dab in the middle of the white-granite, above-treeline wonderland for which this range is known. This is a popular trail, so you’ll find more solitude on a weekday.

White Mountain Peak Road / This route is a 14-mile out-and-back along a closed-to-the-public 4×4 road to the highest point in the White Mountains, White Mountain Peak, at 14,252 feet. The route starts at the Barcroft Gate on White Mountain Road, about 17 dirt-road miles past Schulman Grove in the Ancient Bristlecone Pine Forest. The starting altitude is 11,680 feet, and the grade of the road is runnable.

Tuolumne Meadows to Agnew Meadows / Though logistically challenging because it’s point-to-point, this route entails 26 miles, over 4,000 feet of climb and a bit more descent that’ll make all the prep worth it. The run hits some of the Sierra Nevada’s icons: It begins in Yosemite National Park, uses a portion of the famed John Muir Trail, passes the oh-so-appropriately named Thousand Island Lake and touches on some truly remote parts of the high Sierra Nevada.

Bishop High Sierra Endurance Runs / A 30K, 55K and 100K in October, run in the Eastern Sierra foothills starting at the Millpond Recreation Area just west of town. The races run primarily on arid and exposed jeep roads, so come prepared for a day under the Sierra sun.

Get There / Bishop is bisected by Highway 395, which runs north-south on the east side of the Sierra Nevada. Mammoth Yosemite Airport is about 40 miles away in Mammoth Lakes and offers a daily flight to a major Cali airport, varying by season. Reno-Tahoe International Airport is about four hours north. You’ll need your own wheels for accessing trails.

Play Tourist / Visit the Ancient Bristlecone Pine Forest in the White Mountains, an hour’s drive east of Bishop, to see the world’s oldest living trees, when accessible, usually from May to November. Learn about World War II history at the Manzanar National Historic Site, 45 minutes south of Bishop, where thousands of Japanese-Americans
were incarcerated.

Take Note / Winter is harsh in the mountains above Bishop, and the trails are snow free from sometime in June until the first major fall storm, which typically hits in late October or early November.