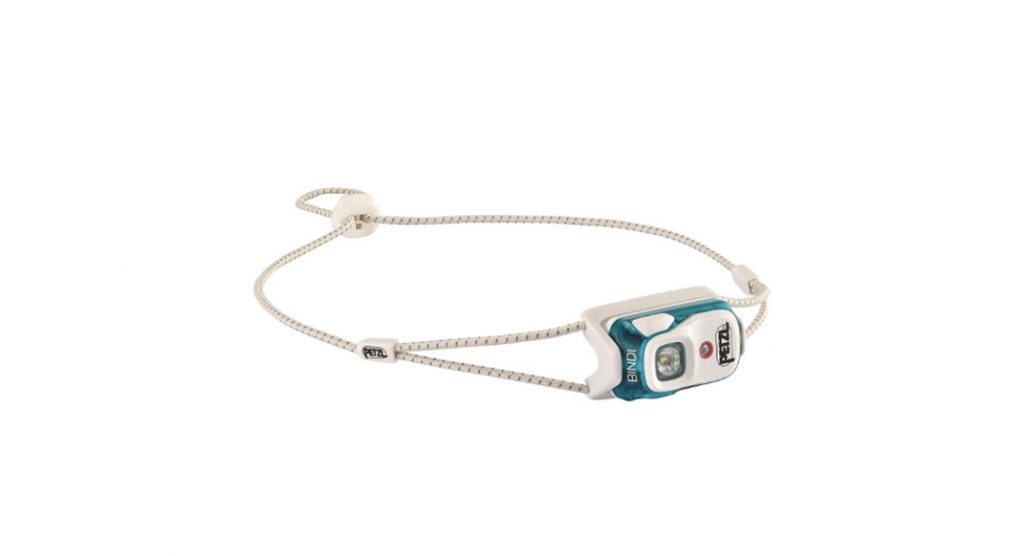 The Bindi headlamp is light-weight, with a thin adjustable cord that stays strapped down while you run, no matter where your are.

The BINDI headlamp fits in the palm of your hand, about the size and weight of an unambitious strawberry. Its thin springy cord can be cinched down to fit snugly across the forehead, and it stays in place much better than a traditional headlamp does. A standard thick band Petzl headlamp slides down my head when I run no matter how tightly I wear it, but the Bindi is another story. And while they do lock everything down nicely, the cords are not uncomfortable.

The light itself can be rotated 360 degrees around its base, so you can easily direct the light ahead of you or to the trail beneath your feet. The Bindi has 200 lumens of power, on the low end for Petzl’s other “active headlamps,” but certainly on the very high end of the spectrum for an everyday headlamp. It has three levels of power for white light (5 lumens, 100, and 200), as well as two red light settings —one that’s constant and one that flashes. I found that with the Bindi set to the highest brightness (200 lumens) I could see a good distance in front of me, and the twenty feet before me were crystal clear.The Bindi also casts a broad light, giving me considerable visibility to either side. My visibility wasn’t too diminished by switching to 100 lumens. Petzl lists visibility for 200, 100, and 5 lumens at 36 m (118 ft), 23 m (75 ft), and 6 m (20 ft) respectively. At the highest setting the headlamp will last two hours, at 100 lumens, three, and the lowest setting, 50 hours — perfect for longer adventures.

You can charge the Bindi’s rechargeable battery with a USB cable (both of which it comes with.) There are pros and cons to this: obviously you have to remember to plug it in occasionally, but if you do you don’t have to worry about replacing batteries and keeping up with spares if you’re out for a long trip.

Brooke Stephenson is the editorial intern at Trail Runner.