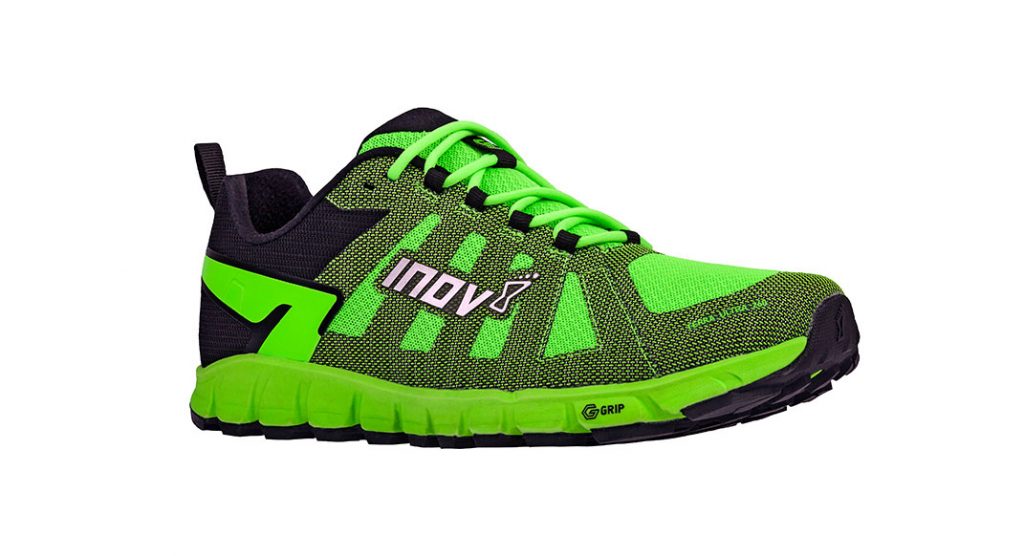 Inov-8 unveiled its two newest trail running shoes on June 20, 2018 at the University of Manchester in England, where it has worked for 18 months with scientists to develop a new rubber compound infused with a substance known as graphene.

Essentially a highly advanced derivative of graphite, the state-of-the-art material was discovered by two of the university’s researchers in 2004 and has since been touted in the scientific community as being 200 times stronger than steel and extremely lightweight, as well as a very good conductor of heat and energy.

Inov-8, which is headquartered in Staveley, about 85 miles north of Manchester at the southern edge of the Lake District, was eager to work with the university to develop the first footwear applications using the new material. To date, graphene has also been used in bike and car tires, solar panel cells and smoke detectors, and, yes, there is a strong rumor that graphene-enhanced condoms are under development.

In what was a fast and intensive 12-month research and development schedule, the institute’s research team incrementally developed more than 20 sample compounds and 232 outsole prototypes that underwent nearly 5,000 miles of wear-testing by dozens of athletes from 10 different countries before arriving at the final compound for Inov-8.

According to Vijayaraghavan, lab tests have shown the new Graphene Grip outsole rubber on the Mudclaw G 260 and the Terraultra G 260 to be more than 50 percent stronger, 50 percent more elastic and 50 percent harder wearing than Inov-8’s previous outsole materials. In practical terms, that means lighter, more flexible, more adhesive and more durable outsoles, and potentially trail-running shoes that will hold up considerably longer. The new models in the G Series line also have uppers made with Kevlar for added lightweight durability.

“Prior to this innovation, off-road runners and fitness athletes had to choose between a sticky rubber that works well in wet or sweaty conditions but wears down quicker and a harder rubber that is more durable but not quite as grippy,” said Michael Price, product and marketing director for Inov-8. “With graphene-enhanced rubber, athletes no longer need to compromise.”

With all new running shoe releases, you have to be careful to decipher between what is marketing hype and what is authentic performance-enhancing innovation. Running journalists tested the new shoes for three days on a variety of trails in and around Manchester and the fell-running mecca of the Lake District in northern England and initial reviews were very favorable.

The Mudclaw G 260, intended for soft, wet trail running and obstacle course racing terrain, is a snug-fitting lightweight, agile shoe built with an array of sturdy 8mm lugs, a resilient TPU-infused midsole foam, a flexible rock plate and a Kevlar-enhanced upper. The tensile strength of the Graphene Grip rubber allows the deep lugs to be impervious to the ripping, breaking and shearing common to other trail shoes with standard rubber lugs.

The Terraultra G 260 is designed for running long distances on hard, dry, rocky surfaces with a slightly wider fit and feel in the forefoot. In addition to a thin, study and very grippy outsole, it also features Kevlar overlays for protection and durability and a slightly thicker midsole layer for added cushioning. Price pointed out that the use of a thinner layer of outsole rubber allows the a runner to have an enhanced proprioceptive feel for the ground.

What does this outsole innovation mean for running shoes in general? Just as adidas’ Boost foam helped create a revolution in midsole technology, the Inov-8’s use of graphene could create a similar charge in outsole technology, said Doug Sheridan, a footwear development expert who worked on the manufacturing of the new outsoles for Inov-8.

“In the last three or four years, running shoes have truly become technical products again,” Sheridan said. “So we’ve seen brands investing in midsole compounds, and there’s been a big technology chase for enhanced cushioning and energy return. Up until now, the outsoles haven’t really changed because the rubber for outsoles—the technology, the pressing, the vulcanization process—hasn’t changed at all since the first sneakers came on the market years and years ago. But my take is that this will create a shift in which more brands are putting efforts into outsole technology.”

Inov-8 has a four-year exclusive partnership with the Graphene Institute. Inov-8 CEO Ian Bailey said the brand hopes to extend graphene-enhanced outsole rubber into more than 50 percent of its shoes over the next two years and to also use the technology in running apparel and packs.

“We have patented the process of how we have made the cake, and made the compound for athletic shoes,” he said. “We’re very encouraged it can be put into textiles, too.”