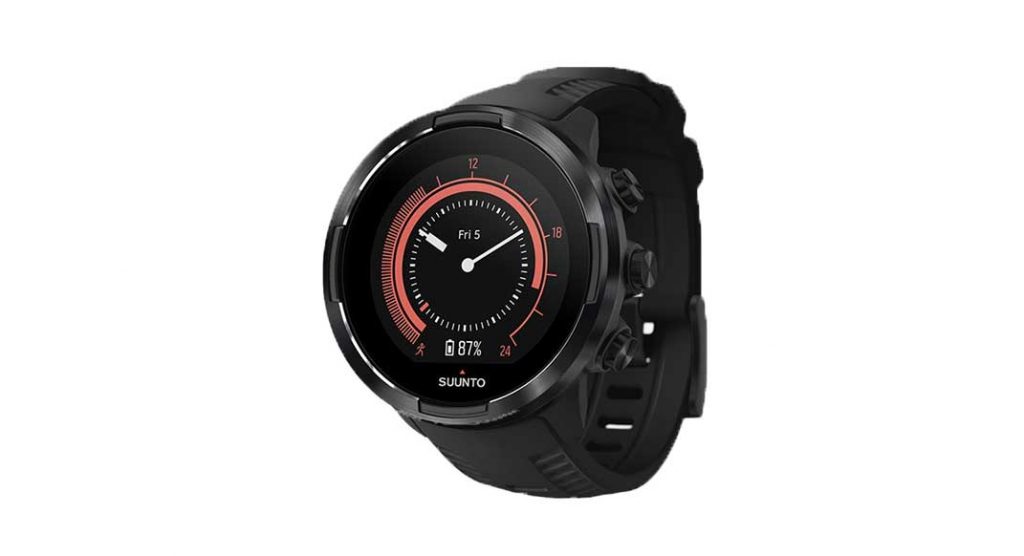 A watch made for long outdoor adventures and sleek enough for everyday wear.

Geared specifically for the ultrarunner and endurance athlete, the Suunto 9 Baro is the newest, smartest addition to an already impressive family that raises the standard of sport watches. Rugged and sleek, this watch caters to hardcore endurance and mountain athletes.

The standout feature of this watch has got to be the battery life. In training mode with GPS, the watch can last 25, 50 or 120 hours in 1-, 60- and 120-second intervals respectively. Standard for Suunto, users always had the ability to adjust and extend battery life by tweaking how often their GPS pings, but stretching that number to 120 hours while also sporting the capability to track intervals for 25 hours at 1 second, Suunto reimagines GPS tracking during 100-mile races or long, mountain outings.

Complimenting the innovative battery efficiency, FusedTrack uses motion sensors to connect breadcrumb GPS points to provide more accurate tracking of your distance, route and speed. It is automatically activated when your watch is in Ultra or Endurance battery mode when intervals are on the lengthier side and battery life is of utmost importance and you don’t want to sacrifice activity accuracy. In the case that your watch temporarily loses GPS signal, the 9’s FusedTrack feature will continue to show accurate speed readings with the help of the calibrated accelerometer.

Intuitive, customizable, and fit with a highly responsive touch screen, Suunto made sure to cover all its bases and ensure that the aesthetics lined up with its high-end performance. It offers 80 sport modes, adjustable intervals, eight watch face configurations, and a user-friendly touch screen interface. Weighing in at 81 grams with a width 50 mm, this watch is as big and burly as they come, without the dilemma of feeling like it. I find the silicone strap to be very comfortable and accommodating, and the sapphire crystal display easy to read and virtually indestructible in mountain-running scenarios.

Supported by the new Suunto App, iOs and Android, this watch sports Bluetooth connect ability as well as the ability to show alerts and texts received on your phone onto your display.

My most recent — and longest — outing with this watch was on an ascent of the Cathedral Traverse in Grand Teton National Park. Knowing that the route was going to take at least 24 hours, but less than 120, I opted to use the Endurance 50-hour, 60-second interval setting. I immediately took notice to the durability and comfortability while moving through the 4th class bits on Teewinot but will admit I found myself accidentally pausing the watch when pulling a few scramble-y climbing moves when my wrist bent backwards—I subsequently found that you can lock the screen so that doesn’t happen by pressing and holding the lower right button.

Moving on, I couldn’t help but keep my eye on the battery life as a force of habit, just waiting for it to be drained, only to see that as the sun was setting, when we found ourselves just below Mount Owen, that my battery was still over 70 percent. We had climbed over 7,500 feet, covered several miles and the watch tracked waypoints literally every minute of it for 10 hours.

For the duration of the Traverse, I almost always had the watch set to the altimeter screen, since mile splits were not of our concern, reveling in the accuracy of the barometric pressure coupled with GPS. I synced to my phone as soon as we got back to the car to check out the watch’s accuracy and overall was very impressed. As expected, while climbing between steep mountains, I lost GPS signal quite often, and that affected how the data transferred onto the map interface of the app.

The FusedTrack certainly did its job well, but understandably couldn’t put all the pieces together when we were on the North Ridge of the Grand. It excelled in measuring most of the route when running and scrambling was the medium – which is exactly what most of the Traverse is.