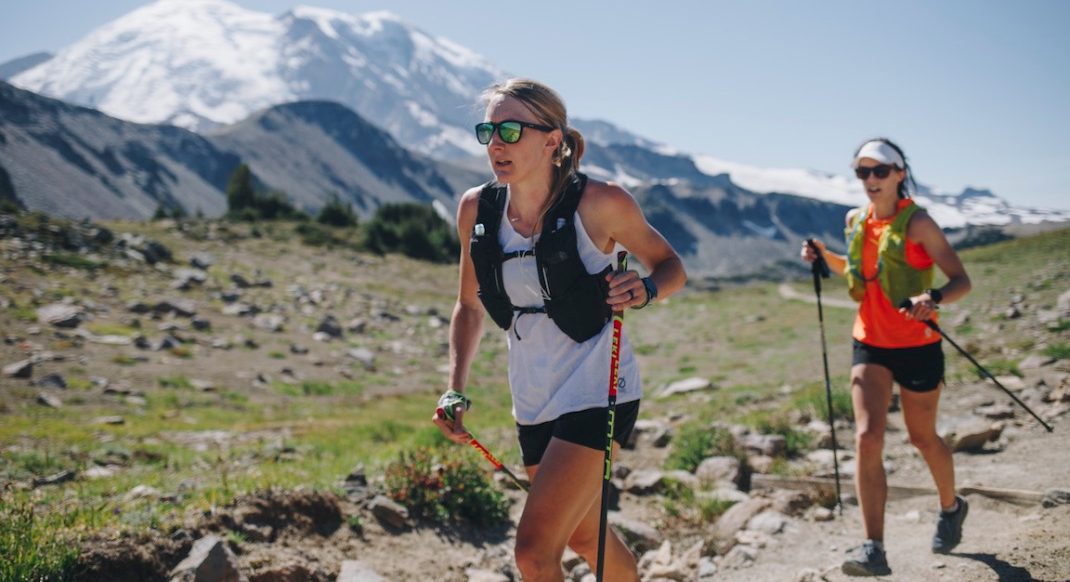 The year 2020 was one for the record books, in many ways we’d all like to forget. But in the world of trail running, despite organized events being canceled worldwide due to the pandemic, there was no shortage of amazing efforts taking place throughout the year. In fact, it’s because races were canceled due to COVID that many, and we mean many, trail runners achieved notoriety by breaking records.

The Fastest Known Time website emerged in the late 1990s after two adventurers (Boulder, Colorado’s Buzz Burrell and Peter Bakwin) completed the 211-mile John Muir Trail. Burrell says he’d spent a week prior to their run researching who held the fastest time, with the results convoluted and ambiguous. “That wasn’t right,” he says. “So after our own JMT FKT, we started keeping track accurately and concisely so others would clearly know what to shoot for.”

Since its inception, the site has tracked just that: Fastest Known Times, or, FKTS, on notable trail running routes (though it also includes some multi-sport routes, as long as foot travel is 50% of the effort).

In the early days of FKTs, a handful of runners listed their routes and times per year, with a handful of others trying to break those records. Posting FKTs was based on personal trust because, as Burrell explains, “the sport was small and everyone seemed to know everyone else.”

With the rise in participation of trail and ultrarunning over the last decade and improved tracking technology, “FKTs” became a thing. Professional runners would set off to break each other’s times on routes like the Grand Canyon Rim to Rim to Rim, or sections of trails like the Appalachian Trail or around mountains like the Wonderland Trail that circumnavigates Washington’s Mt. Rainier. FKTs offered a great alternative to organized races and allowed runners to choose their own adventures and still compete with one another.

Fast-forward to 2020, and the site blew up, with a 392% increase in participation in the U.S. (and a 438% increase worldwide). Three thousand fifty four runners logged efforts on the site in the single year, with 2,976 of those setting new FKTs. Some records would be set, and then broken by someone else within 24 hours…sometimes to be re-broken by someone else or the original runner weeks or months later. (These days, every submission must come with GPS verification. Each one is manually verified by one of 13 volunteer regional editors to the site before going live.)

“2020 was huge!” says Burrell. “There is no state and almost no country in the world that didn’t see FKT action.” Burrell points out that the year’s efforts ranged from monster routes, like linking the 167 highest peaks in Colorado, Wyoming, and Montana in 60 days, to a run along San Francisco’s Ocean Beach with no elevation gain whatsoever.

A panel of 31 FKTers who also put up routes to the site in 2020 voted on the top five inspirational performances of the year. Here’s the lowdown on the winners, from fifth through first.

Alyssa Godesky, a 35-year-old triathlete and ultrarunner who’s completed 33 Ironman-distance races and 45 ultramarathons, ran New York’s Adirondack 46 High Peaks route in 3 days, 16 hours, and 16 minutes. The route connects 46 summits of the Adirondack’s highest peaks over a course of 160 miles and has 67,412-feet of elevation gain. She did the route “Supported.” (FKTs are categorized as “Supported,” “Self-Supported,” or “Unsupported.”)

Thirty one-year-old Kaytlyn Gerbin from Issaquah, Washington, shattered the previous FKT on the state’s 95-mile Wonderland Trail that circumnavigates Mount Rainier. She ran the route in 18 hours, 41 minutes, and 54 seconds, bettering the previous Supported record by almost four hours and setting the fourth fastest time among both men and women.

University of New Mexico grad school student Mikaela Osler broke the 485-mile Colorado Trail Self-supported record (being completely self-reliant instead of taking aid from friends or family), running the route in 10 days, 12 hours, and 36 minutes. She ran the route east to west, and demolished the previous record by almost five whole days.

Thirty eight-year-old South Carolina runner Sarah Hansel tackled the Nolan’s 14 route, which covers fourteen Colorado 14ers (peaks over 14,000 feet in elevation) over 100 miles, with a whopping 44,259 feet of vertical gain. Hansel ran the route “Unsupported,” meaning, without any outside help of any sort. She’s the only woman to have run it Unsupported, and set the FKT of 2 days, 9 hours, and 43 minutes.

Thirty-year-old Sabrina Stanley, from Silverton, Colorado ran the Nolan’s 14 route in 2 days, 0 hours, and 49 minutes. Stanley ran the route twice in 2020, a notable feat on its own, and the second, record-breaking effort just 54 days after her first. Her record is filed under “Supported.”

Kelly Halpin, a 34-year-old freelance illustrator and professional mountain runner from Jackson, Wyoming, tackled her state’s Wind River High Route, a 97-mile high-alpine route across glaciers and tundra with 30,000 feet of elevation gain. Notable about this route is the fact that it hovers between 10,000-12,000 feet, and is often off-trail. Halpin covered the distance in one push of 2 days, 11 hours, 37 minutes in an Unsupported effort, and broke the Supported effort by a full day.

“’I’m pretty good with sleep deprivation,” Kelly was quoted saying on the FKT website. “And I gotta admit, I stopped and went skinny-dipping; otherwise, I would be a little faster. But it was refreshing.”

Tahoe-area local Adam Kimble ran the 170-mile Tahoe Rim Trail that circumnavigates the lake, with 31,000 feet of vertical gain faster than Kilian Jornet did in 2015, and on a slightly longer route. Kimble ran it in 1 day, 13 hours, and 12 minutes, besting Jornet’s Supported effort by an hour and 20 minutes.

Thirty eight-year-old mathematics professor David Alaya ran the 195-mile on- and off-trail Sierra High Route along California’s eastern side of the Sierra Nevada Mountain Range in 4 days, 3 hours, 36 minutes. He did the route Unsupported.

Eric Gilbertson, 35, of Seattle, Washington, set the bar for the Rocky Mountains Slam, covering an astonishing 1,030 miles across Colorado, Wyoming, and Montana and climbing 432,500 vertical feet all in one push. The route includes the Colorado peaks over 14,000 feet in elevation, the Wyoming peaks over 13,000 feet, and the Montana peaks over 12,000 feet. Gilbertson covered the route in 60 days, 9 hours, and 20 minutes. Only two people, Gilbertson and Matt Lemke, are known to have ever completed the route. They both did it during the summer of 2020, with Gilbertson having the faster time.

Seattle-based thru-hiker/ultrarunner Joe McConaughy, 29, set the FKT on the 273-mile Long Trail in 4 days, 23 hours, 54 minutes. The rugged trail spans the state of Vermont, with 65,370 feet of vertical gain across the Green Mountains. By taking water from a hiker, his effort became Self-supported as opposed to Unsupported. He ran the route a day faster than the top Unsupported time.

Joey Campanelli of Alta, Utah smashed the highly contested Nolan’s 14 route that covers 14 of Colorado’s 14,000-foot peaks across the Sawatch Range over 100 miles. His Unsupported effort was five hours faster than the closest contender, which is saying a lot, considering this is one of the most popular FKT routes of all time.

“Truly a place in my heart,” Campanelli wrote of the route on the FKT website. “I hope I get to cherish many more moments in them, and recommend you give ‘em a taste.”

“Pure ‘flow’ is how I would describe my run. Like in the middle of the night, by the faint light, glissading down the most beautiful scree slide on the west face of Mount Missouri…”

Says Burrell of the astonishing year: “I was touched by the hundreds of people who thanked us, saying they had goals and found inspiration, along with a community [through chasing FKTs].”

We can’t wait to see what 2021 brings…in more ways than one.

Oh how I wanna be in the Sawatch!!

3rd-Place Man Please Correct/ to Washingtonian Eric Gilbertson,35/ Texan Eric Gilbertson, 46, set the bar for the Rocky Mountains Slam, covering an astonishing 1,030 miles across Colorado, Wyoming, and Montana and climbing 432,500 vertical feet all in one push. The route includes the Colorado