The ultra legend and original Grand Slammer nearly died when a tree branch hit him in the head. Now he is back on the trails. 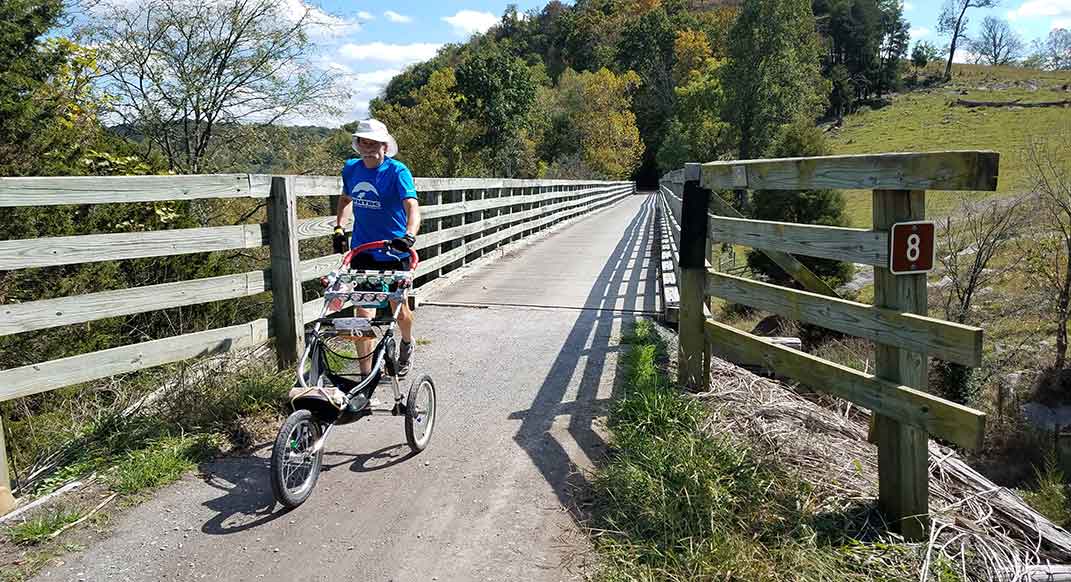 Green pushes his baby jogger adorned with bright lights, to keep himself balanced and focused on the trail. Photo by Charlie Romanello.

Early on the morning of September 29, 2017, Tom Green shuffled through the woods of Abingdon, Virginia, pushing a jogging stroller. Momentarily he lifted his fingers from the handlebar, but he began to fall over. Quickly, grabbed back on.

He knew generally that he was on the trail but his vision was blurry—as though he were wearing someone else’s eyeglasses.

He weaved across the trail, as his pacers flanked on either side, struggling to keep him upright.

The trio silently hoped for a finish-line miracle. Given everything Green had endured in the past two years, completing the Yeti 100 would take nothing less than that.

Green began running trail ultras in the mid-1980s, and in 1986 became the first person to fulfill the Grand Slam of Ultrarunning, completing in a single summer the four most prestigious 100-mile races at that time: Virginia’s Old Dominion 100, California’s Western States 100, Colorado’s Leadville Trail 100 and Utah’s Wasatch Front 100.

Today, over a running career spanning 50 years, Green has completed 280 ultras. But, in April 2015, all that almost ended.

Green was trimming trees in the backyard of his Maryland home, with the help of friend and running partner Alan Doss, who is also a professional carpenter. Unexpectedly, an arm-sized tree branch bounced from the ground and hit Tom in the head, severing his carotid artery. Doss caught Tom as he fell, and immediately began applying pressure to the gushing wound. If it weren’t for Doss, “I might have bled to death,” Green says.

Medics flew Green to the University of Maryland Shock Trauma Center, where they induced a coma so that his severely traumatized brain could begin to heal. His list of injuries was long: cerebral venous sinus thrombosis (a clot that prevents blood from draining out of the brain), a slight dissection of the carotid artery, a fracture to the temporal bone and a stroke originating in the cerebral artery, which provides blood to parts of the brain.

They would induce consciousness for short bits of time over a two-week period to check Tom’s progress.

“For the first three days we did not know if Tom would even live,” says Doss. “Until he wiggled his foot a week later, we thought he might be paralyzed.”

After Tom began to move his foot and other extremities, Doctors brought him back to full consciousness and ushered him to the University of Maryland Rehabilitation and Orthopedic Institute, where he’d remain for another five weeks.

Green was registered to run the Wasatch Front 100 later that summer. While still in rehab, Green overheard a well-meaning friend asking Kay, Tom’s wife, if he should cancel Tom’s upcoming race entries.

“I was very upset thinking I wouldn’t be running Wasatch that year,” he says.

“It’s not if but when you run again,” Green’s wife, Kay, reassured him when they arrived home from the rehab center in early June facing a full schedule of physical, speech and recreational therapy appointments.

Thanks to the stroke he’d suffered in the aftermath of the accident, Tom was extremely weak along the right side of his body. He had trouble balancing, and his vision often lost focus.

The next week, he walked three doors down. After two months, he walked his first mile. It took 30 minutes.

“Not comprehending how bad off I was, I made the goal to do another 100 miler,” says Green. “I wanted to prove to myself I wasn’t completely defeated.”

He purchased a baby jogger through Craigslist, and nicknamed it Wilson, after the volleyball from the move Castaway. The $60 pusher would help with his severe balance issues; rigged with a series of bright lights, it would also help him focus.

Two months after the accident, Green started working with Dennis Albright, owner of Performance Private Training. Albright, who once suffered a brain tumor, knew all too well how to handle balance issues. He would be able to help Green strengthen his weak right side.

“Right away I noticed his balance was off just by the way he was walking side to side,” says Albright. But Green was determined. He joined a 5K training group and entered a few 5K races, including the Hibernation to 5K, which he completed in 35:54

“I was amazed at how well he did in just a few months of training,” says Albright. “Most people would have given up on the idea of running, but not Tom.”

Tom desperately wanted to be at the Wasatch Front 100. So, five months after the accident, he journeyed to Salt Lake City, Utah. Although he wouldn’t be toeing the start line, he was eager to cheer on the runners.

The race is also the final stage of the Grand Slam.

Eager to return to a sense of normalcy, Tom plotted a summit of Utah’s Mount Timpanogos, a rocky, technical peak that rises to 11,752 feet. He had run it effortlessly in years prior.

“Tom’s desire supersedes his common sense, sometimes,” says Charlie Romanello, a longtime friend of Green’s who flew in from California to aid on the hike. “He had trekking poles, but the climb was extremely difficult. He didn’t have the balance to keep from falling. He would have easily gone off the edge. I’ve never felt such a responsibility for another human being’s safety before.”

Running out of daylight hours, the duo backed down.

The simple act of goal setting had given Tom a glimmer of his old self; but the experience had been humbling. “I really missed running the technical trails,” Green says.

Realizing that he couldn’t handle technical terrain, Green set his sights on a few 24-hour races that took place on flat terrain.

In November of 2016—seven months after the accident—he completed 39 miles at the Crooked Road 24-Hour Ultra in Rocky Mount, Virginia. “It was difficult,” admits Tom, “I was just doing minimum pace and my major leg muscles were totally fine. But my arms hurt, from pushing the jogger.”

With confidence in his tank from that 24-hour race, Green decided it was time for a 100-miler. He found two that would allow him to run with his stroller—the Umstead 100 in Raleigh, North Carolina (a race Tom had completed 11 times before) and the Yeti 100 in Abingdon, Virginia.

Umstead was first, in the spring of 2016. “I had a lot of trouble with night vision and being able to focus,” he says. “I would lose my balance and I’d fall and get all disoriented, which was an after effect of the accident. I didn’t even know I was doing it.” He DNF’d at mile 54.

But disappointment didn’t get in his way. Over the following summer and fall, Green would complete five more races, including Tennessee’s Race of the Ages, where, according to the race website, “… all runners over 48 years of age are allotted the number of hours equal to their years of age to accumulate as many miles as possible.” Tom, then aged 65 years old, completed an impressive 124 miles.

But disappointment would strike again at the 2016 Yeti 100, that September. Once again, Green became so disoriented and unsteady that he found himself running in the wrong direction during the night. He’d stop to adjust the lights on his stroller or take in some nutrition, and would find himself backtracking along the course. “That spooked me and I still had eight hours of darkness to go” he recalls. He knew it was unsafe to continue on his own.

It Takes a Village

Knowing of Tom’s deep desire to finish another 100-mile race, Doss and Romanello signed on to pace him at the 2017 Yeti 100. Romanello, who had never run more than a road marathon, registered for the entire race to be with Green the whole time.

Green’s longest training run had been a mere 13 miles, but, he promised race director Jason Green, “You’ll see me at the finish line.”

Roughly 52 miles in, Doss joined Green and Romanello as a pacer. Green was starting to lose his balance. “The further I got into my run, I wanted to fall to my left,” says Green. “Alan would position himself to my left so there was a solid object to bounce off of.”

It wasn’t hard to keep Green motivated, though. Aid station volunteers would see Tom coming from a distance, his stroller ablaze with light, and they’d start cheering and hollering for him.

Likewise, Green would cheer for other runners who passed him. “He would tell other runners ‘stick with me and I’ll get you to the finish’ or ‘I’m proud of you. You can do it,’” says Romanello. “He was struggling so much, but would offer so much reassurance to others. One person after the next would hug or kiss him or thank him for his positive encouragement.”

It wasn’t until mile 99 that the trio knew they’d make the finish within the cut-off time. He ultimately crossed the line in 29:46.

“People think we are related because of our last names, and now it kind of feels like we are,” says Yeti 100 race director Jason Green. “I told Tom he needs to come back to Yeti. He is the heart and soul of this race now.”

Back home in Maryland, Tom runs two times per week and still operates the home-improvement business he’s owned since before the accident. He occasionally takes on projects, but it’s difficult for him. “I don’t have much use of my right arm,” he says. “It’s rough with my line of work.

Ever the problem solver, Green occasionally enlists the help of Alan Doss “who does the physical stuff and I guide him on how to do it.”

Tom is at ease with his new normal, though. “I’ve had my days in the sun where I’ve run good times,” he says. “But now I’m back of the pack, and I’m very grateful I’m even out there.”

Hats off to Tom! Having had a comparatively minor brain injury nearly two years ago, I have a sense of what he must have gone through, and how determined he must have been.

The story is well-told, but from my own experience, I would guess that the reality was far more difficult. This is a man with more guts and determination that anyone else I have read about. Ever.

This man is the true ultra marathon man, not Dean. I think Dean would agree too.

Tom Green’s inspirational will, determination, and example equals my definition of heroism! His light will propel me to run a half marathon without fail after my recent hip replacement. He is my honorable role model! This is a true leader and advocate of what all of us can be! I salute him!!!
Alfred Biegel, Colonel, US Army (Ret)