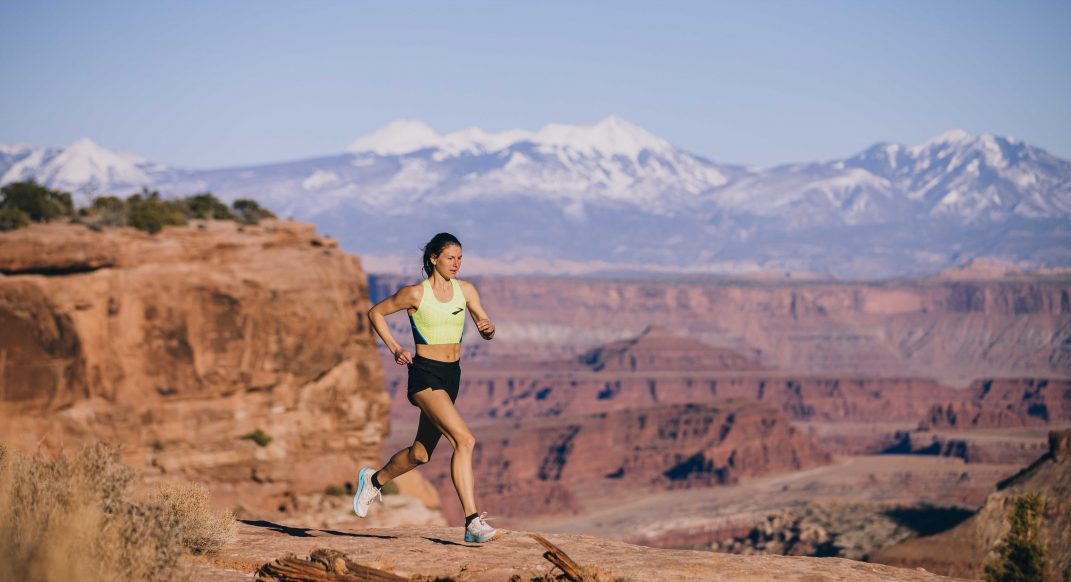 Cat Bradley is the queen of tenacity, of putting her head down and pushing towards a goal, whatever the odds might claim. Cat Bradley is the queen of yes. When frustrated by her college track career at UC Santa Barbara, she said yes to the Appalachian Trail, taking a leave of absence to thru-hike its entirety. What proceeded were a series of yeses. The results were an underdog win at the 2017 Western States 100-miler, a career change from kindergarten teaching to professional trail running, an FKT on the Grand Canyon Rim-to-Rim-to-Rim, and various other accolades. Bradley’s history is one of spontaneous life-changes and constant perseverance. Yet, the past year tested all that we once knew about this self-proclaimed yes-woman.

To understand Bradley’s unprecedented past year, we must regress to 2018. That fall, Taylor Nowlin beat Bradley’s Grand Canyon FKT and, immediately, she aimed to earn it back. On an October morning in 2019, Bradley sought out in pursuit of her goal. She had just reached the North Rim, already 21.5 miles into her run, when suddenly, she felt it—a hole in her shoe. Within miles, it was not a hole but the entirety of the shoe’s upper, torn apart so that her foot fell out, unsupported and landing on the rocky ground below. With no tape in her possession, Bradley succumbed to cutting her FKT attempt short.

Back in Colorado, she yielded willingly to the grind, waking to an early alarm and following the glow of her headlamp to squeeze in miles before the sun arose. She planned to try for the FKT again in April 2020, but COVID had other plans. Instead, Bradley continued training—head down, shoes laced, and miles logged. Her next opportunity would come in the fall of 2020. But, that summer, wildfires blazed through Colorado trails. Bradley’s summer training plans burned along with them.

Suddenly, there was a new feeling in Bradley’s gut—a feeling she did not recognize. She had spent months chasing goals with headlamp miles, sore legs, and daily PT circuits. And for what? A cancelled race, a smoke-filled trail, a broken shoe? The year of heartbreak had been chasing Bradley until, finally, it caught up. At the end of August, Bradley set down her trail shoes. She would not pick them up for nine weeks. In fact, she would not ride a bike, lift a weight, or crest a hill. For those nine weeks, she hardly exercised at all. Never in her life had she felt such a sustained lack of motivation. Never in her life had she woken, so many mornings in a row, with zero desire to run.

On October 31st, Bradley decided to try something new: a run streak. While she would never condone a run streak in the past (and still does not!), at that moment, Bradley craved a rhythm to follow; a pulse to lure her out of her motivation rut, and back to the sport she loved. A run streak was just the thing. With the trail below her feet again, Bradley began to realize the effects of her prolonged break. Throughout her running career, she had faced debilitating back pain, the lingering result of a car accident sustained in 2015. “For so many years, I was just managing my back pain. I was managing, but not healing. It was a gamble each time I went for a run, whether I’d come back limping,” she explained. Now, the pain was gone.

Yet, the healing was not solely physical; the mental result was equally discernable. During her college track days, Bradley hated running slower than seven minutes per mile. Now, she barely thought about pace. “For the first time in my life, I was working hard to run 8:30s. But there’s a freedom that comes with being out of shape. It helped me let go of my ego,” she reflects.

On March 6th, Bradley entered her first race in nearly a year and a half. The event was far from glamorous: she lost the entirety of her water in the first few miles, puked all over herself, struggled on the technical terrain, and ultimately, took third place. And yet, when she crossed the finish line, she felt no back pain. Perhaps more importantly, she felt invigorated—by running in a pack of women, and by feeling the earth under her legs again. Untethered from her usual race day expectations,  Bradley felt free.

March has been an eventful month for reasons beyond her return to racing; Bradley announced a multi-year contract with her dream sponsor, Brooks. At the end of 2020, her former contract was set to expire, and all Bradley could think of was Brooks. She had run in Brooks throughout high school and college and trusted their shoes on both roads and trails. So, Bradley took to social media, emailing every Facebook friend with a connection to Brooks. As 2021 neared, she began to lose hope, and considered foregoing shoe sponsor entirely. Finally, on December 23rd, she received an email from Brooks’ athlete manager, Julie Culley. When they spoke a week later, acceptance was a no-brainer. “So far it’s been better than any professional relationship I’ve ever had,” gushes Bradley, who is especially impressed by Culley’s commitment to ensuring she does not grow overwhelmed by her race schedule.

With her mind, body, and shoes reset, Cat Bradley looks towards future goals. The Grand Canyon FKT still lingers in her mind. Alongside it lie the Ultra-Trail de Mont-Banc and, COVID-willing, a sub 2:40 marathon on a fast course, such as the California International Marathon (CIM).

Cat Bradley is ready to say yes again. Still, she listens to her body and holds the power of rest in mind. After all, the return of that yes-woman mentality came from many weeks of saying no. “Perseverance was always my superpower,” Bradley says. “Sometimes it’s good to give into that unrelenting superpower. But you have to know when to take a break.”

WHAT is the brand sports top Cat is wearing in the picture? Thank you.

Thanks for the inspiration, I feel I’m in that same place right now so I’m hoping tomorrow’s race will waken my soul and put me back in a setting of peace and contentment… I miss the trail 👣