Math on the Run

Major calculations in a high-stakes 100-miler 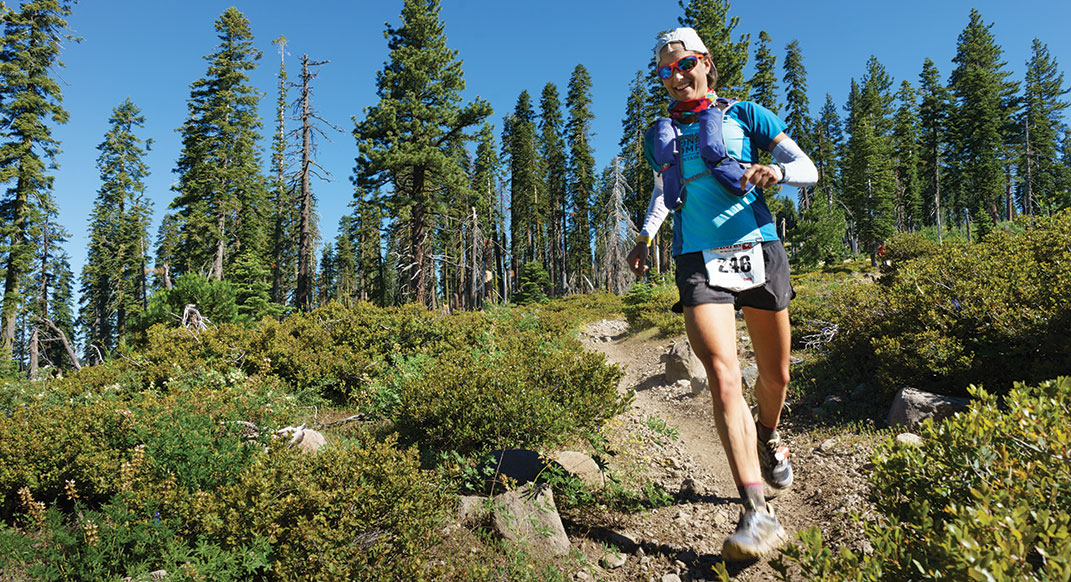 At 1:00 a.m. at the mile 85 aid station, I stand still to consume a triangular piece of quesadilla. Will these three minutes of chomping cheese and refilling a bottle cost me my dream of finishing the Western States Endurance Run under 24 hours?

Eating as mechanically as a wood chipper devouring a branch, I wonder if instead I will later blame myself for the three minutes I took to find the right spot off trail to relieve myself responsibly.

No, it’s the sum total of several short pauses that could kill my dream. But without these brief breaks, I’d suffer a meltdown and spend many more minutes recovering mid-race, like that overheated friend slumped in a chair at mile 48 with an ice bag crowning his head.

Clare, my pacer, breaks my train of thought with a lilting but authoritative “All right,” which conveys that it’s time to go.

We resume running robotically through a fog of dust particles illuminated by headlamps. Squinting and blinking, I mentally crunch numbers.

We’re making up time, but too little, too late. Just past mile 85, we’re still 10 minutes behind the split times between aid stations that predict a 24-hour finish, and the hills ahead will slow us down.

In school, I struggled with word problems that required using “Distance equals Rate times Time,” but in trail races, I live, breathe and master the D=RT formula for arrival times at checkpoints.

Ever since the 5 a.m. start, I’ve reached each checkpoint 20 to 30 minutes behind the target pace printed in rows of numbers on my homemade wristband. Intense heat, canyon climbs and a stop to cool off in a river have added up to create a yawning time deficit.

Spotting my two teenagers and husband by the road, I’d called out, “I need my headlamp, flashlight.” I looked from one to another and saw three blank expressions, followed by a chorus of “Uh …”

My husband ran toward our parked van and returned clutching my nighttime gear while I told my kids it’s OK and thank you. They recognized my polite, professional tone as code for pissed off.

Now, doing the math while maniacally running toward Mile 90, I calculate we will approach the finish line at 24:04.

Five minutes past a sub-24-hour finish would break my heart. Sub-24 finishers earn a sterling silver “100 Miles, One Day” buckle, instead of a bronze buckle for finishing between 24 and 30 hours.

A silver buckle would mean that no matter my age or weaknesses, I can develop a plan and work hard enough to execute it. A bronze would mean—I don’t even want to think about it.

I count minutes to run fast for five, walk for one. Mantras make a rhythm: Get it done, I can run. Suck it up, Buttercup.

Someone at the start had said, “Have fun out there.” Fun is fleeting and superficial. By contrast, this race against time almost feels as if I am rushing to help someone injured or defuse a bomb.

Fired up, we push to build a sub-24-hour cushion and to pass more runners ahead. Now this, this is fun.

With only three miles remaining, I estimate the time until the end. We’re not that close to the cutoff after all. The pace band split times assumed we would slow down after dark, but we sped up then.

We bunch up in a group of other runners and their pacers approaching the finish. Suddenly, with a lump in my throat, I don’t want to share or rush the finish.

“Go ahead,” I tell the others. I want to draw out these minutes and take in the sights of the final mile. I’ve earned a minute or two to go easy and savor the moment.

I walk a ways and smile back at the faces of spectators awake at 4:40 a.m. to cheer us on toward the finish. Then I spot my son and daughter, who are waiting and ready to run by my side in the final 300 meters around the iconic track.

Sarah Lavender Smith is a contributing editor at Trail Runner. This article originally appeared in our October 2016 issue.