Wallowing around the world, from the English moors to the California Sierra Nevada. 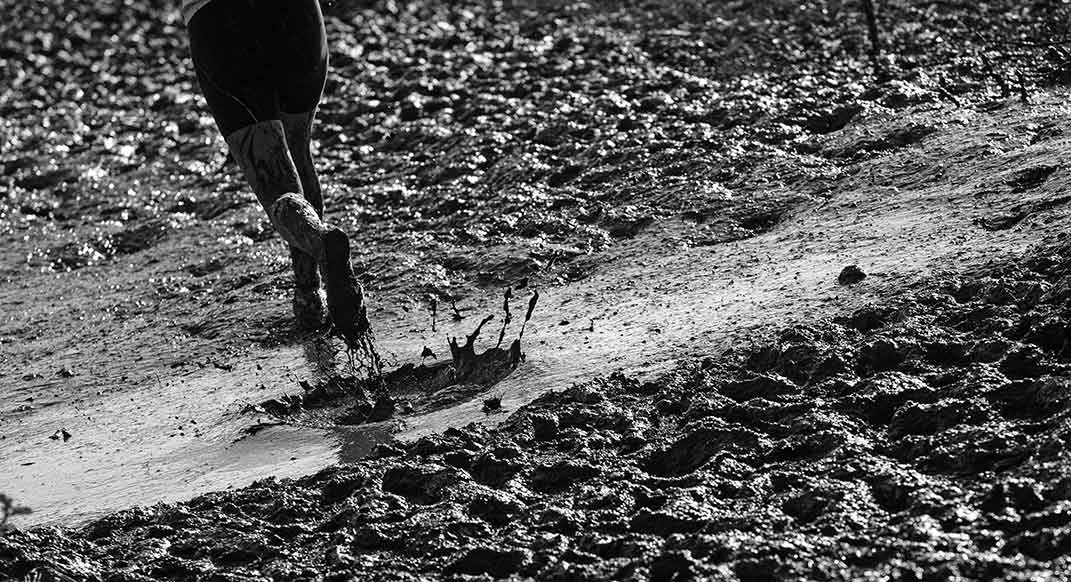 “Do you think you will use 12 millimeters or 16, Sam?” My friend  Henry was leaning across the aisle of the bus, looking at me with curiosity. We were riding up to Nottingham, England, with our fellow Highgate Harriers, a premier running club in North London, to compete in the English Cross Country Relay championships. I had no idea what he was talking about.

“I beg your pardon?”

Henry dug into his bag and removed a spike, a single threaded piece of metal sharpened to a point and designed to be screwed into specific racing shoes for traction. I’ve screwed hundreds of spikes into dozens of racing flats, but this particular spike seemed gratuitously long.

“I didn’t realize they made cross-country spikes that long.”

I had only packed my usual ¼-inch spikes. Henry offered me some of his longer variety. The mammoth shard reminded me of the enormous shark tooth that Richard Dreyfuss digs out of the side of a shark-wrecked boat in the movie Jaws. It began to dawn on me that I was unprepared to race on English terrain.

A few hours later, during the race, Dreyfuss’s phrase, “This was not a boating accident!” echoed in my head as I slipped, slid and stumbled through the English countryside, wishing I had followed Henry’s lead and used the larger shark-tooth spikes.

I had traveled to the United Kingdom to do archival dissertation research for my doctorate in history. I arrived in the summer, just in time to enjoy running in south England’s best weather.

“Not bad,” I thought, as I went on morning jaunts through Hampstead Heath and Regent’s Park in north London. Waking early with the sun, I would run up Golders Hill to Spaniards Inn, a pub built in the 16th century, and jog into the Heath. I would often trot by the Romantic poet William Blake’s house, and skip down the gravel paths around Kenwood, a Georgian mansion complete with dueling grounds. A sharp brisk air would give way to the rising sun—morning dew steamed in the golden sky as the temperature rose. Not bad at all.

Then, in late September, it started raining and never really stopped. The ground sucked up moisture until it could hold no more, at which point, the earth became a waterlogged sponge. Even in the hub of central London, walking down the sidewalk, I noticed mud seeping up through the gaps between paving stones. It was as if London was no longer anchored to the ground, but now floated unmoored upon a sluice of liquid earth. I had visions of skyscrapers sinking down into the morass of the old Roman city, the gaudy glass buildings of Canary Wharf resettling back into the muck of the Isle of Dogs. The Thames would prevail over this ancient town and reclaim London from the hubris of engineers and city planners. All would become mud.

ne weekend day when the archives were closed, I ran north on a greenway toward Barnet, the terminus of the London Underground’s Metropolitan train line. On my way out I jogged through the occasional moor; black freezing mud splashed up on my legs. I slipped trying to cross a cattle gate and landed in a cesspool of slush and manure runoff.

The run back home was a grimy affair, as the gunk hardened on my legs and back. When I returned to my apartment—a low-ceilinged attic I was renting with two fellow migrants—I spent 45 minutes in our tiny pre-fab Ikea shower trying to rinse off the grit.

“Well, this is a new low,” I thought as I shoved a particularly intransigent piece of cow flop down the semi-clogged shower drain.

English mud is an interesting animal. It is dark and cold. It has a fecund smell, reflecting the fertility of the Thames River valley’s loamy soil. English mud is also a reflection of the English people. It takes a certain type of constitutional sturdiness to tread on that ground. The mud is resilient. It is unstanchable. Sometimes in moments of xenophobia, e.g. Brexit, it faintly smells of shit. Yet the English—a people who live amidst the bluster of the North Atlantic, who gave Hitler the finger during the Blitz—they can certainly handle their mud. For myself, however, by the beginning of winter I was starting to fray at the edges.

I still wanted to race on English mud. Trail races were scarce in London, but there were plenty of club cross-country races around the metropole. The British do their cross country in proper fashion: they wait for the late fall to bring rain that turns race courses into absolute muck. This is a far cry from the manicured golf courses of American cross-country running. The English race in irregularly shaped parks with eccentric names like Wormwood, or Ally Pally, or Milton Keynes.

The courses, barely paths, feature some nasty stuff: 100-meter stretches of slop, pitches of slush that sink you to your calves, side inclines that make forward progress nigh impossible. The English excel, indeed revel, in conditions that would lead most American race organizers to cancel a race. It is nasty, it is grimy, it is freezing and it is uncomfortable. It is glorious.

I spent my teenage years training in the Carolina Piedmont, a territory of gentle hills and summer humidity that stretches from Georgia to Virginia, hugging the eastern slopes of the Appalachians. The soil here is slick and red, the product of vast iron deposits that have oxidized, creating a bright rust-colored dirt. It looks and smells like blood. On wet days, you can tell who has hit the trails: the sanguine mud leaves telltale signs on the insides of the calves, rubbed off from the bottoms of shoes.

This is not a natural occurrence. The red soil of the Carolina Piedmont is the result of agricultural overproduction between 1800 and 1950. Like most parts of eastern America, the native forests were clear-cut and the fields put into production. Generations of farmers tilled the rich topsoil to grow cotton, tobacco and soy. Over the years, as rainstorms flowed over the work of innumerable plows, this native soil eroded away. It is now scattered across the bottom of the Atlantic Ocean. So we are left with this red mud.

Carolina mud is slick and close to clay in consistency. It can thus make for sketchy footing in heavy rain. The mud is also visibly bright. When I was logging heavy mileage in the summers of my college years, the debt-fueled housing boom was at the peak of its bubble. New home sites and subdivisions popped up every month along my running routes. These homes always began as huge red slashes in the ground. Bulldozers churned up the land to reveal an expanse of bloody sediment. Red mud covered tires and slathered shoes. It rested upon the welcome mats of suburban homes. It was scraped off outsoles onto the edges of buildings and fences. In the winter, red mud was everywhere—dragged into shopping malls and car dealerships and BBQ restaurants. When I think of the Carolinas, I think of this ubiquitous ocher soil that made trails into orange streaks, winding through the woods.

fter my stint in England, I landed in Northern California, a place of fault-lines and freeways, of microclimates and canyons. Californian mud is heterogeneous, like Californians I suppose. This diversity is evident underfoot. Wet Sierra soil is gritty. If you stumble and fall, Sierra mud will cut into your hands and knees. Around the San Francisco Bay, the mud is diverse; it seems to vary almost trail by trail. Some paths are slippery affairs in the rain, requiring significantly lugged tread to keep moving. Others drain water easily and greet foot-striking shoes with a satisfying “crunch.”

Some California trails feature the dreaded “Sticky Mud,” that sedimentary destroyer of runs. Sticky mud grabs the bottom of your shoes and refuses to let go. It then grabs anything else you step on: sticks, rocks, leaves, small animals. All are caught up in the tyrannical regime of the Sticky Mud. Pity the trail runner who encounters Sticky Mud, which turns their shoes into two-pound agglomerations. It can only be removed from shoes by a mile of pounding on the pavement, or with a fortuitous puddle, or with 10 minutes of diligent picking with a stick.

Yet even when the soil is annoying, it roots us to a particular place, to a particular moment. Perhaps this is why we find stability running on the trails, no matter how uneven or rugged the terrain. We are, quite literally, grounded.

Trail runners are attracted to the transcendence of the beautiful view and the open vista of a broad horizon. We often forget about our point of contact in this sport—how it shapes and determines the way we move through the world.

Mud and dirt are the material stuff within which we are enmeshed as we tread, step, slog and grind through the world. There is more to running than pretty sights and bodies in motion. There are also innumerable textures, an infinite variety of tactile experiences. Remember, the foundation of trail running is, quite literally, dirt.

Sam Robinson is a doctoral candidate in history at the University of California, Berkeley. He is an ambassador for Salomon Running, and has top-10 finishes in several USATF trail national championships.