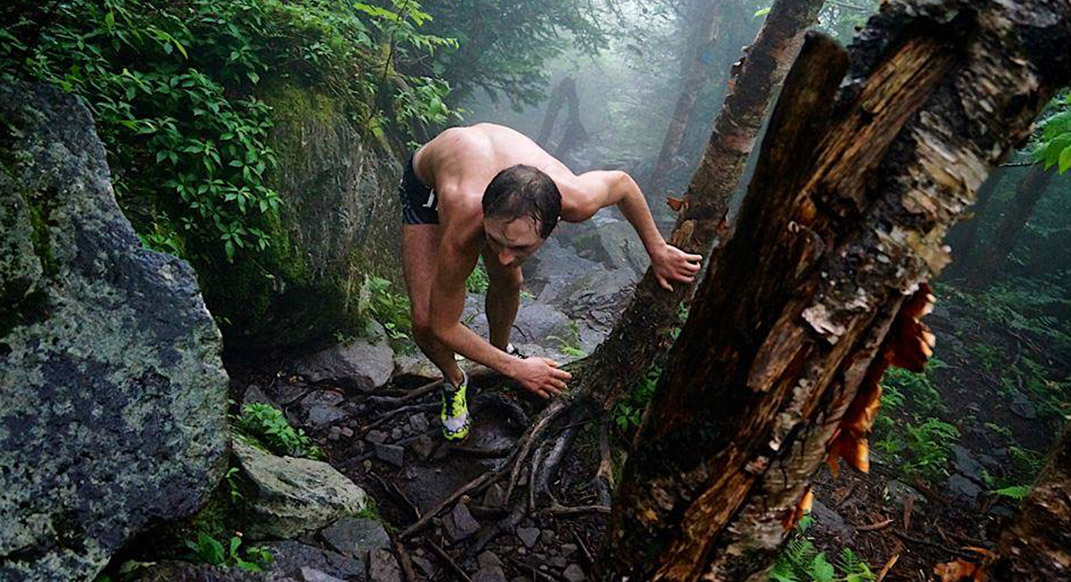 We stopped in confusion. Where did the trail go? Paul, our seasoned trail guide and Escarpment Trail veteran, edged up behind us and pointed to a waterfall gushing down a steep incline. The cascade was our trail.

This was the Escarpment Trail Run, and we were volunteers who had agreed to schlep many gallons of water and supplies to an aid station located miles deep in the Catskill wilderness of upstate New York. A torrential rainstorm persisted, and several points of the trail became small bodies of water.

I am well over six feet tall, and my long stride carried me to safe ground … until I boldly stepped over a puddle only to discover that the pine needles hid a much deeper pond. My foot found the bottom. I can always count on these mountain trails for a good dose of humility.

The rain continued to pummel us as we gained elevation. We stopped to pour bottled water down our parched throats, and were soon saturated from the inside out. Our backpacks seemed to grow heavier with each waterlogged step. There was no illusion of turning back.

All our technical rain gear had been soaked long before we left the parking lot.  Nonetheless, we tolerated the unseasonable conditions and decided to have some actual fun. It was the type of amusement that attracted people to the Escarpment Trail in the first place: rigorous adventure.

The entry blank for the Escarpment Trail Run is a clear indication of such rigor. All runners sign waivers that allude to the prospect of broken bones, dehydration, exhaustion and even tragic death.  Among other things, the waiver advises of potential black bears, bees and porcupines. The woods are full of massive boulders, downed trees, hidden roots, steep cliffs and slippery rocks that span the entire trail. Urgent medical assistance could take several hours on certain remote points of the trail.

That was the allure of the Escarpment Trail Run, though: trying to make it through the unforgiving woods in one piece. Not many competitors travel the full distance without taking at least one painful spill.  I wanted a piece of the action.

There are strict standards to qualify for the race, and for good reason. Volunteering seemed to be the next best thing. However, the topic was debatable. As we tossed heavy packs over boulders, I wondered who had the better deal: the light-footed runners or the gear-toting volunteers.

After much thrashing through the woods, we made to our station: the aid station at mile marker 14. Runners passed the ruins of an old plane crash and then rounded a bend toward the sounds of music and people cheering in the rain.

We waited for runners to crest a hill and pass the isolated wreckage in desperate need of Saltines and flat Coke. Vibrant celebrations ensued each time an athlete entered our secluded domain. As volunteers, these were our defining moments of personal triumph.

Sustenance was an obvious priority for the approaching athletes, but camaraderie proved to be a popular item at our disposal. We handed out Gatorade, granola bars, and welcome conversation to some of the world’s best ultra runners and amateur athletes alike. Our secret formula: high-calorie snacks and low-quality jokes.  This combination was just enough to keep them moving toward the finish line, but I don’t think anyone would have hung around longer even if the jokes were good.

These fleeting moments were so much fun, I almost forgot about the obligatory return expedition, until the last runner swept the course.  We had a mess to clean, and items to return.  I started thinking about food … or, our lack thereof. After breaking down the aid station, I calculated how long it would take for me to get my hands on a cheeseburger. Dinner was not destined to be on time.

The return voyage was relatively quiet as we slipped down the trails to the bottom. It became darker. Eventually I spotted a break in the trees. The lingering sunlight illuminated some pavement in the distance: our finish line.

The post-race parties had long since ended, and the parking lot was nearly empty.  The long journey was over. The event had been a success. We shared a forlorn moment of celebration.

To have been there with some encouragement and sustenance for the many runners who took on The Escarpment Trail Run was a true source of accomplishment.  Sharing those moments with fellow volunteers was just as uplifting.

For those interested in joining the future volunteer efforts, please send your inquiries through the Escarpment Trail Run website and join us on the trails this summer. I will be the tall guy stepping diligently over deep puddles. Just be forewarned: once you step onto those alluring trails, you are destined to return.

John Pinder is a freelance writer and health educator living in the scenic Hudson Valley of upstate New York.  He teaches emotionally troubled youth at a residential facility in Rhinebeck and coaches collegiate athletics for SUNY Columbia-Greene in Hudson. He is also regionally known for his successes as a musician and singer-songwriter.

John, the Escarpment Trail is a bugger of a trail to run, pretty tough not to get lost a bit, very giving when it comes to climbs – and it’s only possible with the amazing volunteers like you who haul aid stations up mountains.

Trail? Mostly … Race? There’s that one flat spot where you can run …

And it’s an amazing race to finish.

Thank you John and all others who volunteer to keep this race – and others – running.

Thanks, Eric! Volunteering isn’t a walk in the park, but running the course is an incomparable beast of its own. No offense intended to all the mountain goats and trail junkies out there. Matching toughness might make for an eye catching title, but I remain in awe of the runners. See you back on Stoppel Point for some well deserved refreshments!