After finishing the Tahoe Rim Trail 100, a runner reflects on what pushes him to run ultras. 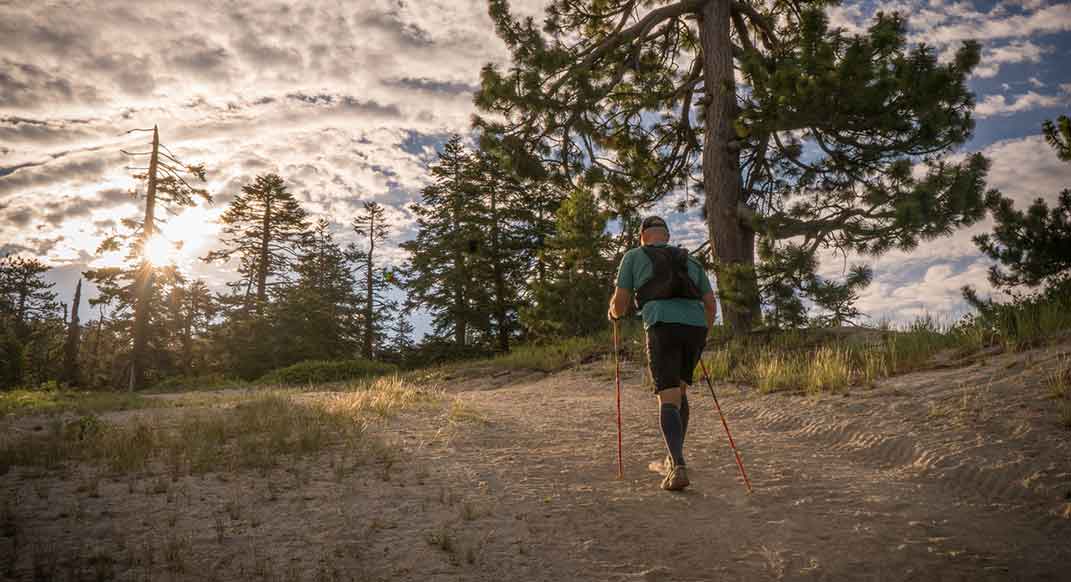 It’s the number-one question that comes up in conversations about ultrarunning.

My biggest ultrarunning fan, my mother, has asked me this question on numerous occasions and in varying formats. How do I do it? What keeps me going?

A woman in my Pilates class seemed downright offended by the idea of running 100 miles. “I can’t think of one reason why anyone would want to do that,” she exclaimed with disgust. I told her I could think of 100 reasons.

So, why do I do it? Why do any of us do it? Why do we put our bodies through the physical and mental suffering required to prepare, train for and run a 100-mile race?

My story starts several years ago, in some of the darkest—and most defining—moments of my life.

On the afternoon of March 1, 2013, I got the call that my little brother, Ruairi, had passed away in a surfing accident in Port Macquarie, Australia.

I can’t recall the moments shortly after the phone fell out of my hand and I struggled to pull off one of the busiest commuting highways in the country, but they were painful. That pain is with me in every breath I take, every mile I run and every waking moment. Ruairi lived a unique life, an unconventional life, and there is no doubt he lived it to the fullest.

He was the one who convinced me to run my first road half marathon, in 2012.

Three months before the accident, my wife, Tara, and I, along with some of our closest friends, were in Port Macquarie visiting Ruairi for the first time. If you’ve ever been up the eastern coast of Australia, you will know why Ruairi chose it as his home. He lived in a small flat on the beach with his dog, Cali, a border collie named after the state Ruairi was born in. They would get up early every morning and go surfing, only stopping to eat, have a few beers and relax in a hammock.

Besides his passion for life, Ruairi was also passionate about working with children with autism. It was a career that started in San Francisco and brought him first to Dubai, then to Manchester, England, and eventually to Port Macquarie, Australia, where he worked with a boy named Daniel.

Ruairi and Daniel had a very unique relationship, one only they understood. Daniel had little communication skills, but Ruairi heard every word Daniel never spoke.

I’ll always remember sitting with Ruairi at a bar in Byron Bay and asking him, “Why?

“Why would you move as far away from your family as possible?” His answer was so quick and short it might have been insulting to a brother who had had to spend a couple thousand dollars just to come see his best friend. He said, simply, “Because, I am happy!”

My lifestyle had never been that stress-free. In fact, I was having regular panic attacks.

The first had happened three years earlier. I was working full-time at a desk job, burning the candle at both ends. I worked too many hours, ate unhealthy and irregular meals and hated my job.

The panic attack started with too much coffee and too little food. I couldn’t sleep, my mind racing with thoughts so gruesome you wouldn’t find them in the darkest slasher film. I couldn’t breathe, and my heart was beating so hard I thought surely the neighbors could hear it. I had no idea what was happening.

Over the course of the next three years I would endure countless other panic attacks—some lesser, some worse. At night, I did whatever it took to stay awake, because the second I lay down, the horrors would come. At best I would get four to 10 hours of sleep per week.

I spent hours in talk therapy, sometimes paying hundreds of dollars out-of-pocket to be seen multiple times a week. I skipped work and took trips to the hospital, where doctors talked about suicide watch.

I was broken. The construction engineer inside me knew how to fix things that were broken, but how do you fix your mind?

I struggled for years, hoping a doctor or therapist could wave a magic wand or put me in a trance to forget what I had experienced. The only spells they offered were in the form of pills.

“This is the only way,” they said. “These will help you.”

There was no quick fix for my affliction.

In December 2014, one year after we lost Ruairi, Tara and I moved into a rental in Lake Tahoe, California. It was a fresh start to a new life—an unconventional life, one inspired by Ruairi.

One evening, Tara pointed at my neck.

“What is that bump?” she asked.

“My Adam’s Apple!” I responded, jokingly. Secretly I had noticed it looking a little odd in the past year. Maybe it had even grown a bit.

We agreed I should probably get it checked out.

I can’t say that fear was one of the emotions I experienced when we found out that my Adams’s Apple was actually a softball-sized tumor attached to my right thyroid. Ironically, there was a moment of relief and, strangely, determination.

Three months passed between my physical in December and the biopsy confirming it was cancer in March. It was a long and frustrating three months, full of waiting, needles, ultrasounds, lab tests and about a million questions.

There are seven different types of thyroid cancer, ranging from the most aggressive and fatal of all cancers to the least aggressive, with a 98-percent cure rate. We still didn’t know where I was on that spectrum.

On May 8th, 2015, I had surgery to remove the tumor, which we had dubbed my “alien.” After spending a night in the hospital, Tara and I woke up with news that the surgery had been successful, and, even better, that the cancer was limited to my right thyroid. About a week later recovery, doctors determined that I had the least aggressive form of thyroid cancer. My treatment plan would include checkups every three to six months, plus a little pill every morning for the remainder of my life. I am happy to say that every checkup since the surgery has been exceptional, and that I can now move to a yearly checkup. After another three years of the same results, I’ll be considered cancer-free.

In the months after thyroid surgery, I began to venture back out for runs, the first time I’d ever ventured off the road. I was hooked, and couldn’t believe what I had been missing.

Race day had me close to my “B” game plan: a 26-hour finish. For the first 70 miles, I relished every step, never once concerning myself with mileage or pace.

But I wasn’t managing my salt and sugar intake properly. At mile 70, I completely imploded. I was thirsty beyond belief, but no amount of water could satisfy me. I found myself urinating every few minutes, but was too confused to process why.

My body might not let me finish this I thought.

Medics held me at the 80-mile aid station for an hour. Chicken broth, a warm cot and the love and support of my crew finally revived me and got me back out on the trail.

33 hours after I had started, I crossed the finish line.

A few months ago, my good friend Kane Cullimore had told me “You have to have a reason.”

Every one of us out there on the trail has a reason for running. My “why” is encapsulated in these three life moments—my brother’s death, my struggle with anxiety and my experience with cancer, experiences that have forever changed me and made me who I am today.

I could have given up or DNF’d when things got rough. But I think I can speak for all of us when I say we don’t toe the line at 100-mile races because they’re easy; we do them because they’re hard. We do them for the challenge, and for the opportunity to push ourselves beyond our known limits.

This article originally appeared on the Donner Party Mountain Runners website. It has been edited and republished with permission from the author.

Love this so much, Sean!! You are such an inspiration. Thank you for sharing this very personal and incredible story.

Beautiful narrative of something that is so hard to explain. I know there’s a deeper reason why I’m running lots of miles (not ultras yet) but I don’t have a clear story. You’ve given me much to think about and inspiration to keep on going. From a 65 year-old who’d still going, still enjoying it.