School of Nielsen: Legend of the Angeles Crest 100

Learning from legends and leaving his own, Tommy Nielsen passes down three decades of hard-earned knowledge. 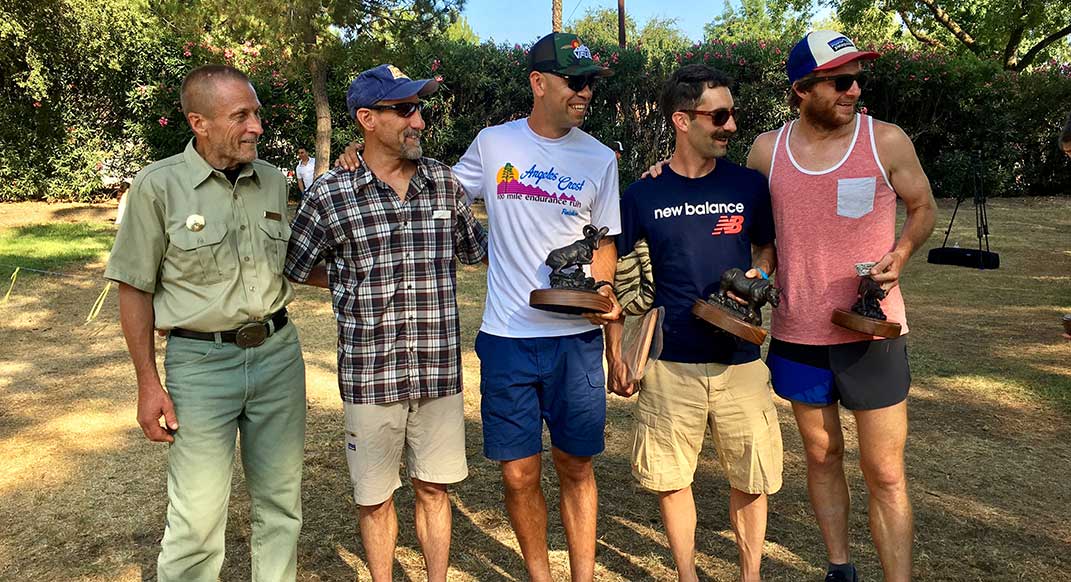 Gathered together at Loma Alta Park in Altadena, California, a small group awaited the leaders of the 2017 Angeles Crest 100-Mile Endurance Run. The last anyone had heard, Branden Bollweg and Dominic Grossman were running out front, with Jerry Garcia only 11 minutes back. With 25 of the toughest mountain miles remaining, it was anyone’s race.

When the first headlamp came bouncing up the street, the crowd rushed to see who it was. Would it be the leader, Bollweg, or the former champion, Grossman? It was Garcia.

Tommy Nielsen had been here before. Ten times, to be exact, and one particular time in a very similar situation. It was 1999, and Nielsen found himself in a race with two of the sport’s fastest, young stars, Ian Torrence and Scott Jurek. He patiently hunted them from behind all day and arrived first to the finish line, to much surprise from the spectators. That was nearly two decades ago, but neither the race nor the lessons it bestows have changed much over the years. It’s what makes AC AC, and it’s what keeps guys like Nielsen coming back.

First run in 1986, the Angeles Crest 100 is one of America’s original six 100-mile races. Starting in the small mountain town of Wrightwood, California, the course traverses the beautiful San Gabriel high country through the Angeles National Forest, hitting a high point of 9,300 feet with a gain of 6,600 feet in the first 25 miles, all at an average of 8,000 feet above sea level.

Each year it draws top talent from the Southern California area, as well as the occasional star who didn’t run Western States, Hardrock or Leadville and isn’t heading overseas for UTMB. But, for the most part, it flies largely under the radar.

“No one knows about it anymore,” says Ian Torrence, age 44, of Flagstaff, Arizona, a five-time AC finisher and competitive trail runner who has finished over 200 ultras. “When we had 10 or 12 100-milers to choose from, you knew the ins and outs, the rumors and everything.”

Between his first AC finish in 1997 and his most recent in 2014, Torrence has seen many events change and adapt to accommodate the influx of technology, media and participation. They feel like entirely new races, which is what makes the tradition of AC so special. “It’s no different than when I ran it before,” Torrence says. “Except I was younger then.”

It’s a bring-your-own-gels type of deal with plentiful, but basic aid stations and a unique award structure that favors older runners and repeated finishes. Animal-themed trophies which create races within the race: a cougar solo runners participating without crew and pacers, a rhino for the top runner over 30 years of age, an elk for runners who have10 finishes, a grizzly for 20, and for 30, a solid silver-and-gold class ring. The race director, Ken Hamada, hand makes and personally etches a plaque for every finisher.

For 29 years, the co-race-director, Hal Winton (better known as “Uncle Hal”) lead trail-work days in preparation for the race, welding a chainsaw well into his 80s. When he passed away this year at the age of 85, many runners ran with shirts, patches or epitaphs penned on their arms in his memory.

AC isn’t just old-school run; the course itself is old-school tough. “It’s one of the hardest, more runnable 100-milers,” says Torrence. “The last 25 miles of AC—” he pauses here and laughs. “You’ve got 75 hard miles on your legs already, and then you’ve got to go up Mt. Wilson, which is just stupid.”

The course record,17 hours 35 minutes, set by Southern-California local Jim O’Brien in 1989, is one of the longest standing 100-mile records in this country. The closest anyone has come to breaking it was Hal Koerner in 2008. He fell short by a full 54 minutes.

The course’s brutality draws people back year after year. To date, 98 people have finished the race four or more times, with 18 finishing 10 or more. Through 2013, two runners had run every single Angeles Crest: Jussi Hamalainen and Gary Curry. When Curry passed away in early 2014, Hamalainen carried his ashes and spread them across the finish line before crossing himself. For many runners, Angeles Crest has become much more than a yearly reunion and test of endurance. It has become part of who they are.

If Angeles Crest is an event that values hard work and humble victories, Tommy Nielsen may as well be its poster boy. Nielsen has finished the AC 100 10 times, spanning an ultrarunning career of three decades. All 10 finishes were under 24 hours, and eight landed him on the podium. He has won twice.

Hailing from Waukegan, Illinois, rooted in San Diego, Nielsen started running when he got sober. In less than two years, he racked up 12 marathon finishes, and quickly moved on to ultras.

He went on to achieve finishes at the Wasatch, Cascade Crest and Hardrock 100s as well as seven silver Western States finishes, six in the top 10. In 2000, at the age of 40, he finished second behind the 26-year-old phenom Scott Jurek. But AC was his biggest motivation.

“When I got into the sport, I looked at guys like Jussi [Hamalainen] and Joe Schlereth. These guys were nine to ten years older than me and they were just killing it,” remembers Nielsen. “You feel like you should be beating these guys, but then you realize that age isn’t really a factor. It’s smart training and smart running.”

Nielsen doesn’t like to talk about himself. Instead, the conversation quickly devolves to his respect for other runners and his meticulous analysis of the sport and the race at hand. “He was one of the most methodical ultra runners I ever knew,” says Ben Hian, one of Nielsen’s training partners in the 90s and early-2000s, and a five-time finisher, four-time AC champion. But getting him to talk on a run is no problem. “If we did a 30-mile run, Tommy would be talking for 29.5 miles,” says Hian. “We knew he was having a good day when we got him to stop talking.”

Over the years, Nielsen’s battles in the San Gabriels have been with some of the sport’s biggest heroes including Hian and Torrence, as well as Scott Jurek, Hal Koerner and Jorge Pacheco. The 1999 edition saw him facing off with Torrence and Jurek.

Nielsen had four previous finishes under his belt, and was of the opinion that if he could hold back and arrive to Chantry, mile 75, feeling good and within 20 minutes of the leaders, the win could be his. Jurek had pulled away throughout the day, and with his pedigree and closing ability, the race seemed all but summed up. But Nielsen began the last 25 miles right where he wanted to be. Nielsen passed Torrence on the climb leaving the mile-75 aid station, and moved into second place. “He was a rock rolling downhill, and I was a log being pushed uphill,” recalls Torrence. “He ran a smarter race. He ran a 100-mile race. I ran a 75-mile race.”

Over the next nine miles, Nielsen made up a full 20 minutes on Jurek, passing him just after the mile-84 aid station. He hammered the remaining miles, arriving at the finish line to the cheers of Jurek’s supporters.

“It ain’t Scott,” has become somewhat of a legend in the Southern California ultrarunning crowd, a rallying cry for runners who know that hard work and patience can help a local boy beat the unbeatable.

While Nielsen’s name may not be as well known among the broader trail-running community, those who have run AC know it well. When Jerry Garcia, 39 of Altadena, California, decided to make a run for the champion’s ram trophy in 2017, he knew that his best shot was a call to Nielsen. He’d heard the local legend had recently begun coaching.

“[Last year,] I remember feeling tired after Mile 29, and just winged it the rest of the way with no real race strategy but to go hard,” said Garcia. “I knew my way of racing 100s wasn’t working. I had faith that Tommy’s training and race tactics would be my shot at getting a Ram.”

Along with a training schedule and a race-day plan, Garcia was going to have to instill some of that 1999 Tommy-Nielsen patience. “I told him, if you’re in 19-hour shape and you go out and execute a perfect plan and run 19 hours, you don’t have any control over two or three other people maybe going under 19 hours,” says Nielsen. “You’ve gotta stick with ‘ok, this is the kind of shape I’m in, this is what I can do. What other people do, you don’t have any control over that.’”

On August 5, Jerry Garcia left Wrightwood vowing to be more patient than the year before. He let the frontrunners go—Grossman, a two-time champion with five finishes under his belt, and Pacheco a four-time champion with ten finishes, along with a young up-and-comer, Branden Bollweg. He arrived to mile 75 a mere 11 minutes off the leaders. He caught Grossman, who had edged him out for third the year prior, at Idlehour, mile 84.

“It was a different Jerry,” recalls Grossman. “It was really clear he was running a Tommy race, and it was going to be hard for anyone to outrun him on the final downhill.”

Just as his mentor had done nearly two decades before, Garcia hammered the next descent, passing his rival and now closing on the leader, Bollweg. He ran the last 25 miles in one of the fastest splits ever, five hours 22 minutes, to take home the win. Nielsen’s 1999 split was 5:27.

Coaching doesn’t mean that Nielsen’s racing days are over. Now 58, he hopes to return to AC and continue his streak of sub-24-hour finishes. Just like his mentor, Jussi Hamalainen, he’d like to earn a silver buckle in his 60s, and still be out there in his 70s.

“Jussi embodies everything I want out of ultrarunning,” he says. “Consistency, longevity, and a true love of the sport.”

Katie Grossman is a freelance writer based in Wrightwood, California, and runs for New Balance. Follow her on Twitter at @HeyKdGrossman for news and thoughts on running in the mountains.

Great article from an AC veteran, Katie Grossman. Maybe she can write an article sometime about Ruperto Romero, over 50 and killed the 2016 AC race. Also, her husband Dominic and Jorge Pacheco should get headline billing!