Comedian Jon Glaser talks comedy, trails and his HOKA ONE ONE Speedgoats with Trail Runner. 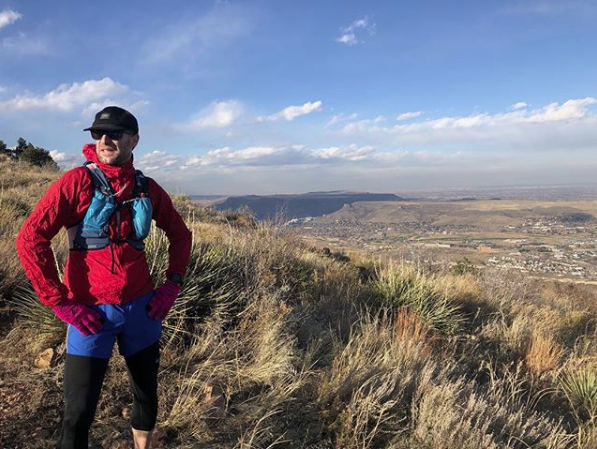 Jon Glaser, a comedian you may know from shows such as Parks and Recreation, Late Night With Conan O’Brien or Girls, has debuted a new show dedicated to the absurdity of the gear culture: Jon Glaser Loves Gear. The catch is, Glaser, 50, of Brooklyn, New York, is actually gear obsessed.

Playing a fictionalized, heightened version of himself, he fumbles through the episodes trying on different sports and the kit that goes with them. Behind the slapstick and self-deprecating humor, Glaser is humble and kind, and has a true affinity for the trails. Trail Runner was fortunate to catch him by phone between travel, photo shoots and work on Season 2 of the show, which he writes for and stars in.

Sports have always been part of my thing. Running is nice because you can do it anytime and anywhere. When I do comedy festivals, I like to get out to run to see the area. My wife and I live along the New York Marathon route, and that race has always inspired me.

I finally ran it in 2017. It’s so iconic. Then, in May of 2018, I ran the North Face Endurance Challenge at Bear Mountain 10K. I loved it. It was very challenging, but the trails are so peaceful. In September I did the Shawangunk Ridge Trail half-marathon.

How did you get into comedy?

I always enjoyed doing comedy, even as a kid. Then I got a role in high school and had to give up baseball for the part.

One year during college, I went to Chicago to audition for Second City and, while I didn’t get the part, one of the producers took me into her office and said, “You should stick with this. You need some training, but I thought you were funny.” It meant a lot.

She gave me her card and later, I moved to Chicago and called her. I remember thinking, This is crazy, she’s not going to remember me. She either faked it or she actually remembered me. It didn’t turn into anything specific, but it kept me going. I usually can’t get through that story without crying.

Why do you prefer trails?

I just like getting off road and out into the woods. It’s quiet … and the gear involved is pretty cool, too.

How did you come up with the idea for your show?

Well, it started from a genuine place of really liking gear. I was coming up with new material for live comedy shows and I came up with this bit where I supposedly had writer’s block and went back to that advice, Just write about your passions. And I was like, Well, I really love this new raincoat. So I take the raincoat to shows, talk about the features. There’s no jokes; it’s very dry. But for some reason it gets laughs. It was a funny idea that ultimately found its way into the show.

My HOKA Speedgoats. I remember the first time I saw those shoes. I was like, “Fuck those shoes; give me a break.” Then I really liked them when I ran in them. I also really like the Brooks Calderas. And my Ultimate Direction Mountain vest. It fits so perfectly. I keep thinking, I look like a moron right now but I don’t even care.