Kimmel just broke the 37-year-old record at Pikes Peak Marathon. She's in the middle of a racing blitz and is not fazed. 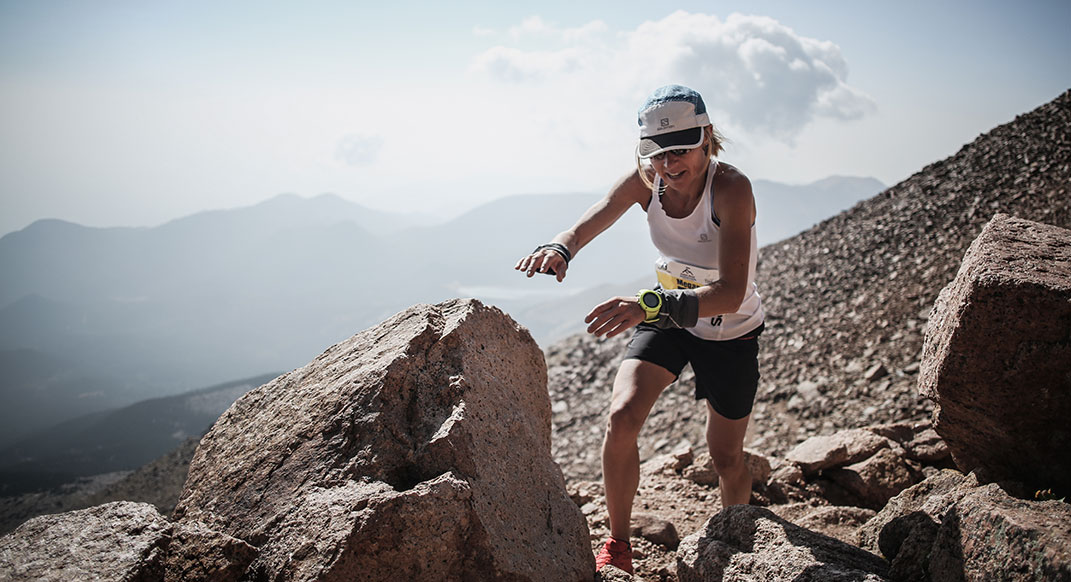 Kimmel, during her record-breaking finish at the 2018 Pikes Peak Marathon. Photo courtesy of Salomon Running.

Thiry-eight-year-old Megan Kimmel, of Carbondale, Colorado, has been running trails for eighteen years and racing for ten. And the woman will not slow down. At this last weekend’s Pikes Peak Marathon, Kimmel hammered her way to a stunning finish, beating a course record that’s held since 1981.

Kimmel won the Pikes Peak Ascent in 2009 and holds claim to six consecutive La Sportiva Mountain Cup wins (2009 – 2014). She also placed second in the international Skyrunner World Series in 2015, and the next year came back with a vengeance and was crowned women’s champion of the Sky category for 2016 with wins at the Yading Skyrun, the Matterhorn Ultras 46K, the Rut 28K and the Limone Extreme SkyRace. In 2017, she won the Marathon du Mont Blanc in 4:40:36.

In the last nine weeks, Kimmel has been sweeping the globe with amazing performances. A fifth place overall and first place women’s finish at the Broken Arrow Skyrace 52K in Lake Tahoe was followed by a fifth place finish in the women’s race for the 2018 Mont Blanc Marathon, and a sixth place finish at Sierre-Zinal, August 12th, in Switzerland—a notoriously steep then fast 31K race. Sierre-Zinal is one of the Golden Trail Series races and prides itself on offering $1,000 to all top ten men and women finishers, so elite racers are competing aggressively until the last second.

Click the photo to check out our interview with her after the Sierre-Zinal 31K in Switzerland:

You are a massage therapist, right? Does that background help with your training?
My training for becoming a CMT definitely shaped a lot of my early training. But […] I am a shadow of my former self. I have found it very challenging to become a full time athlete and keep to the healthy practices that used to be my life, while also trying to pay the bills and build a solid financial future for after my years of racing—all while racing.

How did you feel going into Pikes Peak?
I was feeling pretty unsure of things. I’m in the middle of three races in a row and I didn’t feel I was that focused on this race. But I’m comfortable at altitude and I was excited to be back at Pikes Peak for the first time since the beginning of my racing days.

Did you think the record was up for grabs this year?
It [Pikes] always draws a big Colorado ladies crowd that I don’t normally race with so I was shooting for top three. At the same time, I did refresh myself with what the course record was as I was confident it could be broken. I realistically didn’t think it was the right timing for me this year so I’d say I was doing field work to return to Pikes next year.

How are you balancing recovery amidst your current three-race blitz?
Between Sierre and Pikes, I was focused mostly on keeping a calf muscle that cramped during Sierre-Zinal from getting worse. So my week in between was pretty low in mileage. Today, two days after the race [Pikes], I have some moderately sore muscles and I do feel my energy reservoir being pretty low.

What race were you most excited about?
I was really looking forward to Pikes because it just holds so much energy to me, being a Colorado kid and feeling it is my forte more than the others (high altitude mountain running), and it had been eight years since I’d been there.

I knew I was not prepared for the speed of Sierre-Zinal so I was not so excited about that race. But I kept the vibes up by not putting pressure on myself for any top finish. It is also a great atmosphere and it is always fun to race with such a high level of competition. So by the time I got to Chandolin [about 12K in], I was pretty excited about it, too.

How are you feeling going into TDS?
I’m nervous about many things… I’m most nervous about the distance as it is about 50K more than I have ever done so I don’t have experience or confidence to draw from as far as a “game plan” goes. But for me TDS is not a race, it’s an experience. Maybe there are others there to race but I just want to finish having enjoyed it as much as possible.

Can you describe your worst moment on a run or during a race?
The one that sticks out was the Barr Trail (a mini Pikes Peak), a number of years ago. I was working 24/7 maintaining my small business and trying to keep a racing schedule. I started the race and everything was bothering me, people breathing down my neck, people in front and in back of me, my self-imposed pressure to run fast and win and…I cracked. I just stopped the race, got off the trail and hopped on a rock above the runners and watched the rest of the runners having a good happy time on the trail. Staying in a good head space is number one.

In general, I have always been sure to keep running as a therapeutic practice, not at all a pressure. Most of the time, if I don’t feel like running or racing, it has turned out to be a great day, or at least a worthwhile effort. This is why I am most thankful for running and why it will always be a part of my life.