Land acknowledgments do more than help us learn history, but have the power to shape our relationship with the land we run. 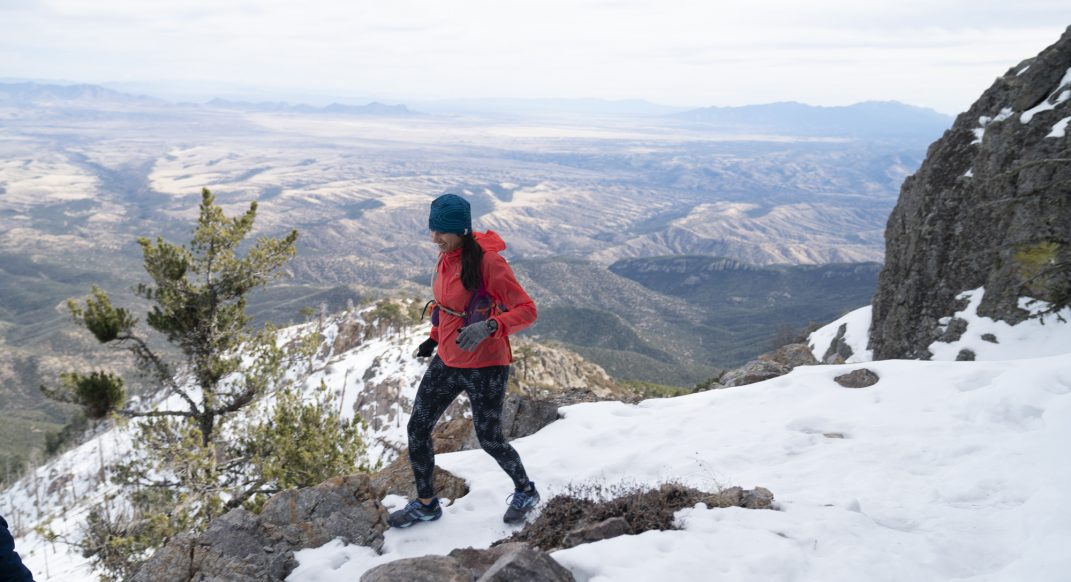 You might have noticed land acknowledgments popping up everywhere from your Instagram feed to the start line of a race.  A land acknowledgment can be a formal statement or an informal location tag that recognizes and honors the Indigenous Peoples who have inhabited these lands while drawing attention to the enduring relationship that exists between Indigenous Peoples and their traditional territories. This practice can raise awareness of histories that are sometimes forgotten, or, intentionally suppressed, and be an important reminder that Indigenous peoples are still here.

This practice can raise awareness of histories that are sometimes forgotten, or, intentionally suppressed, and be an important reminder that Indigenous peoples are still here.

How often does one encounter the Indigenous name or history of the trails you run on? Do the names or history impact how you know and experience those areas?

I often run on a peak known as Mt. Wrightson in the Santa Rita Mountains of Southern Arizona. This mountain area is special because it is a premier birding area, and a Madrean Sky Island (isolated mountain ranges in the Sonoran Desert where you can see incredible plant diversity in only a few miles due to elevation and moisture regime changes). The mountain is named after William Wrightson, a miner from the 1800s in the region. I belong to one of the neighboring tribes, each of which has its own distinct name for the peak that speaks to the cultural importance of these mountains to us. The Tohono O’odham Nation, the traditional land stewards of the Sonoran Desert, call the mountain range “To:wa Kuswo Do’ag,” which roughly translates to Turkey Neck Mountain. Many wild turkeys run at the base of this mountain, which may be what attributes this name, but others have suggested it is the shape of the mountain. In my language, the name “Tewei Seewa Kawim” translates to a culturally significant plant that grows in this mountain region.

Both of these names tell us about the ecological and cultural significance of why this area is important to protect for our future ancestors, as opposed to the name of a European colonizer whose primary relationship with the landscape was exploitative and extractive. Some mountains are named after colonizers who never even set foot there! Much of the ecological and cultural history of sacred ecosystems has been lost when protected areas were established and Indigenous peoples were forced out or excluded from using land they had previously relied on for food and cultural materials.

This was harmful to many Indigenous communities and did not achieve the original goals of conservation, as well as discouraged many Indigenous people from utilizing what are today public lands and National Parks (dispossessed Indigenous lands). For decades, conservationists advocating the creation of such areas insisted on drawing a clear line separating nature — understood as raw, unpopulated wilderness — and culture, meaning any human activity that impacted the local environment. As a result, both governments and conservation groups viewed Indigenous Peoples as obstacles to be removed, if they were considered at all. Advocates for expanding protected areas saw Indigenous displacement, and the disruption of traditional practices, as the sad but necessary consequence of environmental protection. The model based on this trade-off has resulted in social conflict and brutal violations of human rights while degrading the very land it purported to protect. Conflicts involving Native communities, governments and industry are common throughout the world’s more than 100,000 protects areas, a designation that covers parks, reserves and heritage sites. Today, protected areas take up more than 155 of the Earth’s surface—an area twice the size of Canada.

This study demonstrated that Indigenous managed lands are an important repository of native vertebrate species in 3 of the 6 largest countries on Earth. Because Indigenous peoples currently manage one fourth of the Earth’s land (which contain within them 80% of global biodiversity), collaborating with Indigenous Nations & organizations to support Indigenous land management practices is clearly a route to achieving global targets for biodiversity conservation, and suggests that its actually cheaper for governments to invest in Indigenous land management practices in federal parks than current programs related to enforcement, restoration, and biodiversity initiatives. Land acknowledgment is a form of recognizing colonialist ideas about conservation and preservation that are harmful to people and ecosystems they purport to protect. It’s also important for many of us trail runners to remember that while for us, public lands can be our playgrounds, for the tribal nations who have a long-standing cultural grounding in these lands, these places are Indigenous peoples’ food pantry, pharmacy, classroom, and place of worship. Indigenous languages, cultures, and ways of knowing depend on our access to uncontaminated lands.

It’s also important for many of us trail runners to remember that while for us, public lands can be our playgrounds, for the tribal nations who have a long-standing cultural grounding in these lands, these places are Indigenous peoples’ food pantry, pharmacy, classroom, and place of worship.

So how can our trail running community be good allies and support Indigenous communities and their stewardship of landscapes we run? A simple first step is learning about whose traditional homelands you run with. Native-lands.ca or a quick Google search can provide information about the traditional lands, traditional names, treaties and languages of those trails you experience. Including this in your social media posts and race websites is a quick way of demonstrating you are taking the steps to learn about the places you run. As a running community, it is important to build relationships with our neighboring tribal nations who were removed from what are today our public lands. Some races, such as the Taos Kachina Marathon, Endurance Santa Fe, and any trail race on the Arizona Trail, are offering discounted race entries to tribal members, as a way to pay homage to Indigenous land stewards and make trail running more accessible to Indigenous runners.

Tribal Nations also host their own races and provide cultural learning opportunities, such as the Canyon De Chelly Ultra, or the Canyon X Half Marathon (both on the Navajo Nation, but many other Nations host their own races as well). Support Indigenous-owned running businesses, such as Red Earth Run Co and Natives Outdoors, and fuel your runs with Indigenous-owned products, such as Tanka Bars, which is owned and employees members of the Pine Ridge Indian Community using resilient agricultural practices.

“Knowing that you love the earth changes you, activates you to defend and protect and celebrate. But when you feel that the earth loves you in return, that feeling transforms the relationship from a one-way street into a sacred bond.”

It is also valuable to follow Indigenous peoples on social media to continue to learn about on-going colonization. In my opinion, trail signs should include the tribal nations whose homelands we are entering and the Indigenous names of those trails. It would help us recognize why these places are so important and why we as trail runners must invest in these places with our votes, our volunteer efforts, and with our relationship building.

Indigenous scientist Dr. Robin Wall Kimmerer sums it up this way, “Knowing that you love the earth changes you, activates you to defend and protect and celebrate. But when you feel that the earth loves you in return, that feeling transforms the relationship from a one-way street into a sacred bond.”

Knowing what a trail or mountain is called by the original land stewards in their languages is a prism into how those caretakers see the world, how this place came to be, and why we must continue to care for these ecosystems. By learning the name, the Indigenous history, past and present, of the lands we run with, we are rebuilding our relationship with the land, acknowledging that our future is in our lands, and shifts our separation from the land to realizing that we are part of it.

Lydia is a PhD candidate in soil microbiology and mining reclamation at the University of Arizona, with a minor in American Indian Studies. She is a Pascua Yaqui & Wixaritari citizen, a National Science Foundation Fellow, and an American Geophysical Union “Voices for Science” Fellow. When not researching, she can be found running or playing with her pup, Salchicha.

Thank you for this! Really appreciate reading and learning from Lydia.

Thank you Lydia! It’s not surprising that indigenous lands have the highest biodiversity in the world, but it’s so helpful and shocking to see those data laid out for us like this. It’s also an incredibly helpful reminder that land is not just a playground – it is a way of life for so many people. Thanks for sharing your voice!

I felt waves of goosebumps as I read this article. Though I have no indigenous blood to my knowledge, I feel every human being who is connected with their own body naturally feels oneness with and reverence for its Mother. It’s affirming to gain some insight into how indigenous peoples’ cultural traditions can guide our western mindset back to saner foundations.

Thank you for this writing, Lydia. Very informative and grounded. I only wish my fellow natives and others in my area would stop using our desert and mountains for trash dumping grounds.

This is such a great and important piece Lydia, thank you for writing it.

Lydia Jennings addresses one of the most important issues in the environmental sciences – generating an awareness of how indigenous people care for the Earth and acknowledging both historical and current indigenous land practices. I am so glad that she brings this issue to the trail running community – who generally have a more intimate relationship with the land and a greater love of natural beauty. But, they may not be aware of the people who lived on these lands before colonization and who have survived despite the abusive actions of that colonization. In our region, Great Lakes Endurance is also a Native-Owned running company (Lake Superior Ojibwe) and runs its events in an ecologically mindful way. Again, thank you Lydia.

Thanks so much for this comment and information Jeff! I am always looking out for other Indigenous running communities and Indigenous companies to support! If i ever make it to Ojibwe lands, I will make it to an event. I’d love to learn more about how your events are run!

Thanks for sharing this. Trail running is, at its core, a connection between the runner and the earth beneath them and the ecosystem around them. Understanding the history and context of those lands adds immeasurably to the experience.