We're excited to expand our family and support this badass, philanthropic, dedicated member of the trail-running community. 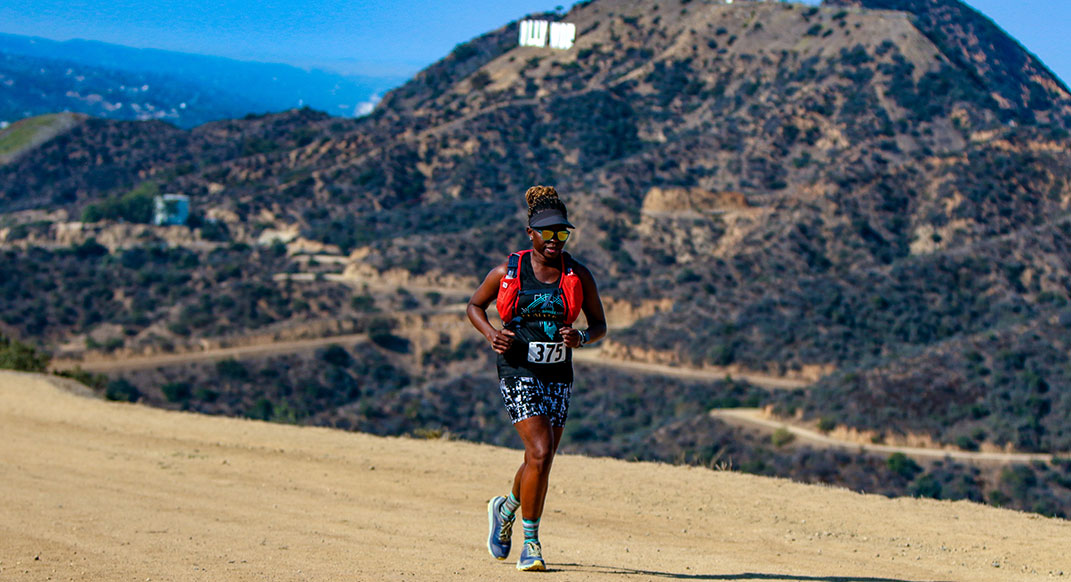 Originally from Cameroon, Mireille Sine (French pronunciation) moved to Los Angeles at the age of 6 and became a sprinter and hurdler at Bravo Medical Magnet High School in LA. Bravo didn’t have a track so she and the team would run three miles up a hill to the neighboring high school to train. “I hated that part,” she says, of the journey to the other high school.

Now, 28, Sine has caught the trail and ultra bug and regularly runs well over three miles, hitting trail ultras on the weekends near her home in Koreatown, LA.

After being diagnosed with Lupus, an autoimmune disease, in college at Long Beach State University, Sine realized it was time to “take control of my life and my health.” She started running and training for road marathons. Sine completed four marathons in two years before getting inspired to hit the trails. To get her trail legs under her, she started asking friends and referring to the Trail Runner magazine “How to Trail Run” guide.

“I was asking a lot of my friends who trail ran: How is it? What’s a good plan? But I do so much better if I just go out there and do it.” And did it, she did. Since August 2018, Sine has completed four trail races and has been raising money for charities, to boot.

In 2015, Sine ran her first 15K road race, the farthest she had run at the time, to raise money for the charity, Lupus LA. “I used the opportunity to educate others about Lupus while celebrating my own journey thus far. I was one and a half years out of chemotherapy and the race fell on my 25th birthday!”

For her first 50K training cycle, she raised almost $900 for the American Civil Liberties Union (ACLU). “I wanted to support an organization who I felt would generate the largest impact and one who deals with multiple issues on a daily basis.”

Having been in remission for a few years, Sine is still on medication and “I have a slew of appointments with my rheumatologist, general practitioner and other specialists to keep my health in check. I make sure to stay active and engage in selfcare.” Running is a big part of that for her and she wants to spread the word to family and friends. “No one else in my family runs. In a way, I feel like I’m changing the trajectory of the family tree by being more physically active. Hopefully I’m around long enough to see the ripple effects!”

Sine trains with Blacklist LA running club during the week to focus on speedwork and hits the trails on the weekends. “I like the speedwork; I think it’s necessary. When I see people going fast all the time, I think it’s too much. A designated speed day is great because it complements the rest of the training.”

Switching between Topanga Park and Griffith Park in LA, she remembers to take it slow while on the trail. Trail running for her “isn’t so much about pacing as it is about other aspects, like form and technique. I like how much slower it is. I don’t look at my watch unless I’m trying to beat a certain route or shave time from a previous run.”

Working as a physical/occupational therapy aide, Sine has future plans to continue helping in big ways. Beyond enrolling in a Master’s of Public Health program soon, she hopes to contribute to her core value of service. “I have always dreamed of helping the world on a grand scale, but it’s only recently that I realized that doing small things in my community can also generate a large impact. I want to be an agent of change. Whether that’s helping others find their purpose, getting them started on their running journey or helping the less fortunate, I’m trying to find a way to weave together everything I love and bring that out to the world!”

“I’ve learned so much about the trails and myself through experience, a great community and resources such as Trail Runner Magazine. I believe that the trails are for everyone and they are a great way to get out in nature and switch up your training.” You can find Sine readying for the Trail Challenge in Southern California this summer (Tough Topanga, Tough Mugu and the Bulldog Ultra) or on Instagram here.

Seems like a great person to have as a first rep!

I approve! What a great gathering of skills and talents.