At the plucky age of 96, Fremont is still racing trails and doing pull ups. 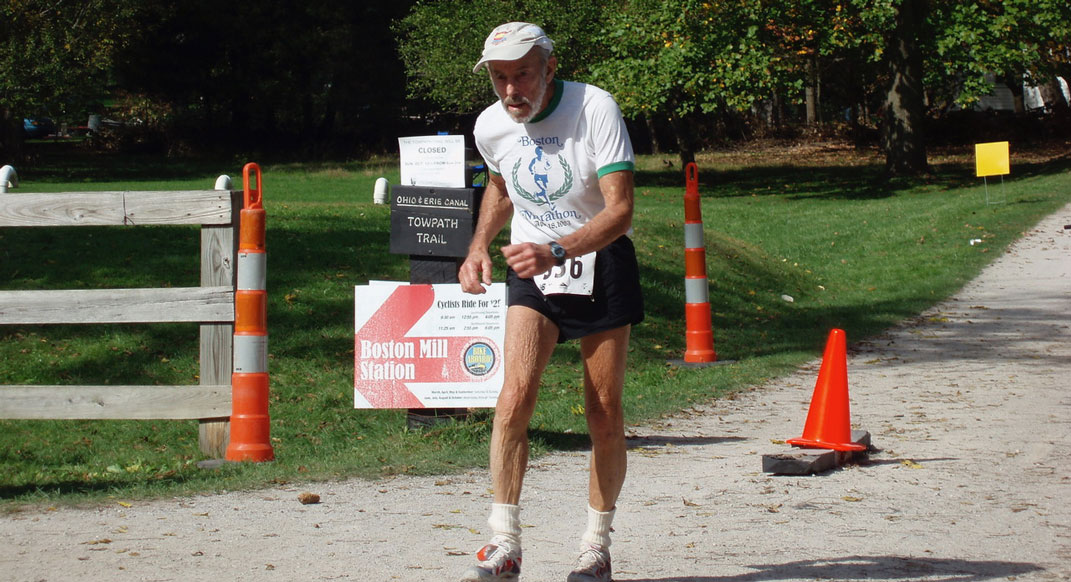 Mike Fremont during the 2008 Towpath marathon near Cleveland, Ohio. Photo by Marilyn Wall

Mike Fremont, who turned 96 years old on February 23, still runs 10 miles three times per week. He canoes the other days. He holds four single-age world records (Marathon: ages 80 and 90 years old and Half Marathon: ages 90 and 91) and continues to compete today.

He has been running his whole life, but attributes his excellent health and spunk to his vegan diet. When not running or paddling his canoe, Fremont volunteers his time speaking at schools to encourage others to live healthy lives and encourage environmental conservation.

He’s as “rare as the yeti,” says his friend and accomplished ultrarunner, Harvey Lewis. Lewis, 42, of Cincinnati, Ohio, thinks Fremont should still “buy green bananas. His quality of life is outstanding. He can go farther than most Americans of any age. Mike has the energy of a high-school teenager,” says Lewis. “In fact, probably more. He can do more pull-ups—eight at one time—and push-ups than many active young people. And he will have you laughing within minutes. He’s humble, often kidding at his own expense.”

Recently, Fremont shared his story and advice with Trail Runner.

How would you describe yourself, outside of running?

I’ve been an environmentalist since reading Rachel Carson’s Silent Spring [about the environmental damage from the widespread pesticide use] in 1962. In 1966 I became an advocate for restoring and protecting rivers—nationally, Ohio-statewide and locally—which has become a consuming interest for over 30 years. I have even helped out with rivers in Brazil and Africa.

When did you start running, and why?

I always enjoyed running on beaches in Cape May, New Jersey, in the 1920s [while] on vacation with my parents, and in New England where I went to college and worked for most of 1940 to 1948.

When my first wife died in 1958, we had three small children and I took up running after work instead of a martini before supper. It was the best thing that could have happened. All of my children are runners.

What has changed in the running culture or community since you started?

Now there are countless races, from dashes to ultramarathons. 10Ks are not so popular as they were. [There are] more women than men in several half-marathons.

Acceptance of the sport [has changed] and [there’s] a broader physical and medical understanding of the health benefits of the sport, including blood circulation to the brain, and the pounding that the vertebrae get that seems to delay mental aging.

What is your best running memory?

The Hibiscus Dash ‘n Sand 5K race, which I ran in 2015 and 2016 at Vero Beach, Florida. We ran it on the beach, most of us barefoot, at sunrise, at the ocean’s edge. From the race start, around a curve of the shore, you could see the turnaround flag at the halfway point. All you could see was ocean and beach.

What is your most embarrassing running memory?

I have no embarrassing memories, even though I have fallen several times in races and many more times in practice. I’ve gotten black eyes and bloody knees and elbows. I just find amusement.

What have you had to adjust to as you have aged?

If it’s too cold my hands can’t operate a zipper. Or my toes get frostbitten. The rest of me stays warm. Haven’t tried those $200 electric gloves yet.

Loss of companionship: my running friends are too fast for me now unless they’ve been injured.

Since I [have] run mostly in a county park for the past 45 years, people will stop me and say, “I’ve seen you walking around here for years and years!” I reply, “You just insulted me! I’m pretending to run!”

What advice do you have for younger runners?

What advice do you have for older runners?

Go vegan! It pays in a thousand ways. Ignore the attractions of six-packs and Krispy-Kremes.

Be prepared to come in last in races.

Do you have any tricks or tips that have kept you so active and healthy into your 90s?

The reason I continue to run (and race canoes long distance) is simply because I can. And in 27 years of being vegan, I’m convinced it’s this diet plus freedom from undue stress that is actually responsible for my activity at this age. It isn’t genetic. It isn’t single-minded dedication to running or canoe racing. It isn’t the 30 miles a week or the 16 or so Boston Marathons I’ve done.

The standard American diet took nearly 70 years to threaten my life. At that point, I had a tumor and was given three months to live. I went vegan, which killed the metastases from that tumor in just over two years.

What are your current goals?

Well… A race director in Des Moines, Iowa has asked me to come to Des Moines to run the 800 meter and the mile. I said, “you want me to go all the way from Cincinnati to Des Moines? What’s in it for me?” He told me I’ll set a world record if I do it. There is no American record for a 96 year old in the mile or 800 meter. I figure I can’t lose.

Othewrise, my current goals are just to keep running and racing canoes and to contribute to the planet in the form of helping to change the American diet. Since 2005 scientists have written that 51 percent of greenhouse gases are caused by our form of agriculture, specifically. A change in diet would be an enormous move to reduce CO2, and it would improve our public health and life expectancy.

And to improve my ultramarathon race times!

—Jacky Thompson is an avid mountain and desert trail runner. When she isn’t rock climbing, running, foraging or frolicking outside, she can be found practicing yoga and playing music.

I knew Mike back in Ohio, fighting for our rivers. He was a dynamo of a fighter back then and isn’t it something at 96 he still runs as he did 25 years ago. A remarkable man, I’ll never forget!

Him and Fauja Singh will hit it off like peas in a pod!

What a dude. Thanks for the fun questions and responses with Mr. Fremont.

Mike set the record for a 90 year old, not for the 90-99 age group. It is an age specific record and not an age group record. Mike has a proven/recorded birth certificate in the U.S. I have heard it said that Fauja was born in a country that, at the time, didn’t document all births. So, he may have no actual proof of his age. Correct me if I’m wrong. Nonetheless, I’m sure they both have inspired many people.

Love this interview! Really inspiring to see such verve and humour in an age group that is largely considered irrelevant by society. And so wrongly! Happy running Mike!

What a great idea Harvey. Not only to showcase great local talent, but to include the vegan lifestyle in it as well. I have so enjoyed your challenge so far. Almost as much as your AT daily posts. Keep up the good work.

What an inspiring story if most Americans would follow his advice the country would save billions of dollars in health care costs.

I have great memories of working with Mike and several OSU colleagues on economic valuation of river systems which resulted in a book of that title published by Edward Elgar in 2007. It would not have happened without Mike’s leadership and support!