The two runners tagged the final summit in 57:55 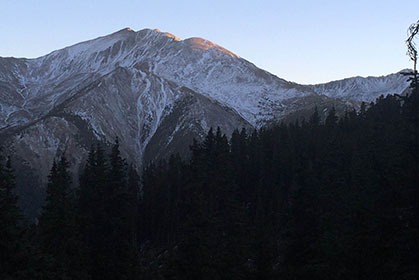 Earlier today, Anna Frost and Missy Gosney finished Nolan’s 14, a linkup of 14 14,000-foot peaks in Colorado, under the 60-hour cutoff. They are the first women to have completed all 14 summits of Nolan’s, and only the 12th and 13th individuals to have done so in the run’s history.

Nolan’s 14 is not so much a route as an objective: summit 14 Sawatch Range 14ers in 60 hours. (Some place the finish at the final trailhead, after a descent from the 14th summit, but runners who reach the final summit within 60 hours are generally considered to have completed Nolan’s.)

Nolan’s can be run northbound or southbound, and there is no set course, leaving runners free to pick the most efficient lines. Often, this entails bushwhacks through undergrowth, perilous descents on steep talus fields and bewildering off-trail navigation in the dark. Over the course of three days and two nights, runners cover roughly 100 miles and climb some 44,000 feet.

Frost, 33, of New Zealand, and Gosney, 48, of Durango, Colorado, set off at 6 a.m. Sunday, from the Fish Hatchery outside Leadville, the traditional start for north-south attempts.

They reached the first summit, 14,421-foot Mount Massive, shortly before 8:30 a.m., according to their GPS tracker. They tagged two more summits, Mount Elbert and La Plata Peak, before dusk, and another three overnight, including Huron Peak and the off-trail section down its eastern slopes, infamous for getting runners turned around in the dark.

After another day and night of peak bagging, Frost and Gosney began today atop 14,197-foot Mount Princeton, the 11th summit in the north-to-south direction. Princeton, a sprawling, stand-alone peak, is considered one of the “cruxes” of a southbound Nolan’s run: after its summit, runners face only two big climbs and three more summits. The last two, Tabeguache Peak and Mount Shavano, are connected by a short saddle.

Frost and Gosney reached the Shavano summit shortly before 4 p.m. today, about 57 hours 55 minutes after they had started, according to their GPS tracker.

Both Frost and Gosney have stout mountain-running resumes that prepared them for such a journey. Last month, Frost won the fabled Hardrock Hundred Endurance Run, a 100.5-mile mountain race in southern Colorado almost as brutal as Nolan’s, while Gosney came in fourth. 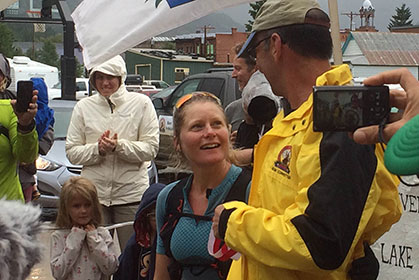 Frost and Hardrock race director Dale Garland after her win there in July. Photo by Paul Cuno-Booth

Both have also spent time on the Nolan’s route. Gosney made 12 summits in a 54-hour run last year. Frost has trained in the area, and paced Gavin McKenzie and Brandon Stapanowich during their successful 2014 Nolan’s run.

“It’s huge,” Frost said of Nolan’s 14 when Trail Runner spoke to her Friday, two days before she and Gosney started their run. “It’s such a beast.” But, she said, after battling her way through Hardrock, her anxieties about Nolan’s had largely dissipated.

Frost said she was looking forward to the low pressure of Nolan’s, as compared to a race. “It’s slow-moving, it’s just you against the time,” she said. “If it doesn’t work, we can just come back and do it again.”

Not that that will be necessary.