The 32-year-old gapped second place (and first male) by 10 hours. 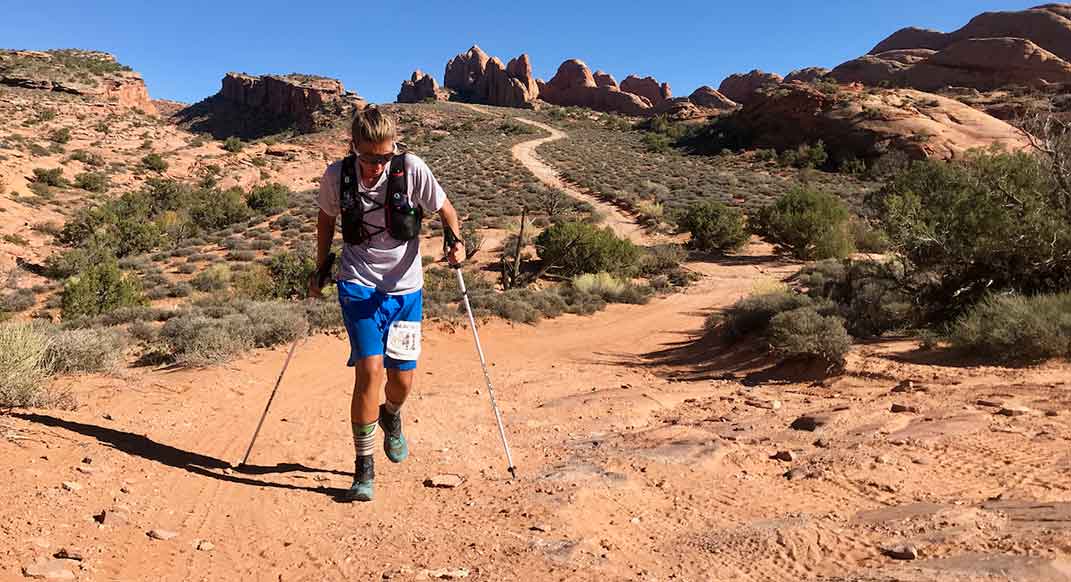 In most ultras, the difference between first place and second place is a matter of less than an hour. Even in the Bigfoot 200, which took place in Washington in August, the top two podium spots were separated by just five hours.

Dauwalter, 32, of Golden, Colorado has been trail racing since 2011, but blossomed onto the national trail-running conscience suddenly just last year, with wins at Colorado’s Run Rabbit Run 100 and Arizona’s Javelina Jundred 100K (overall), where she bested both the women’s course record and the overall course record.

Four months after that, in February 2017, she set a new American women’s 24-hour record at the Riverbank One Day 24-Hour race in California, running 155.4 miles.

Dauwalter grew up an athlete. She was on the cross-country, track and Nordic-ski teams at her Minnesota high school (she was an All American for Nordic), and went on to race for the Division I Nordic team at the University of Denver. After graduation, she turned to running. Road marathons quickly led to trail ultras.

Of the 39 races Dauwalter has completed since 2011, she has won eight outright and finished on the overall podiums of nine others.

But she doesn’t seem to put too much stock in beating men to the top of the podium. “When I’m out there racing, I don’t care if the runner in front of me is male or female,” she says. “I’m pretty competitive. Winning is always my goal. I think women can compete against men on the same playing field in ultras.”

Dauwalter signed up for the Moab 240 on the heels of another big ultra win at the 2017 Run Rabbit Run 100, in Steamboat Springs, Colorado. She had earned her second win there, running the final 12 miles in total blindness.

“[The blindness] was super gradual,” she says. “It started with a blurriness in my periphery, which closed in until my vision was all white.” Dauwalter was left to stumble her way down the technical singletrack, falling many times and ultimately finishing with a bleeding gash on her head.

“I didn’t fully process what was happening,” she says. “In the moment, I was just thinking ‘I’m in this race, I need to keep moving.'”

Her vision came back fully within five hours, though the cause has yet to be determined. Doctors surmise that the issue was likely due to some combination of nutrition deficit and irritation from dust on her contact lenses. (A report recently came out listing corneal edema as a common cause of blindness in ultrarunners and other endurance athletes).

Six weeks later, Dauwalter was standing on the start line of the Moab 240, dressed in her signature running attire—baggy 12-inch shorts and men’s-cut t-shirt. “It’s total comfort,” she says. “They’re nice and flowy. You’re out there for such a long time; you should race in whatever you’re comfortable in.”

Indeed, the Moab 240 involves anywhere from three to five days on course. The first-year event traces a giant, single loop 240-miles through the canyons and mountains of eastern Utah. The race involves 29,467 feet of elevation gain and descent.

Signing up, Dauwalter says, was part of a “natural curiosity about what else can my body and brain do,” she says.

During the intervening weeks, she had focused on resting and squeezing in a few last weeks of training (Dauwalter averages 90 to 100 miles each week).

Come race day, Dauwalter had no plans to take the lead. In fact, she didn’t have a plan at all.

“There are so many unknowns—the distance, the length of time,” she says. “I was just hoping to learn something about how to do [200-milers]. It was a fluid, non-plan plan.”

Around mile 100 or 130 (Dauwalter’s memory is fuzzy), she came in to an aid station while the lead runner was napping. She left while he was still in his crew vehicle, and didn’t see him again for the rest of the race.

Dauwalter wouldn’t sleep much during the 57 hours she was on course. She laid down for 20 minutes at mile 190, “Thinking I would sleep,” she says. “But my brain wouldn’t shut off.”

Five miles later, though, fatigue set in. “I couldn’t keep my eyes open,” she says. “I was zigzagging down road.”

She laid down on the trail and slept for exactly one minute, with her pacer as a human alarm clock. “It was the deepest sleep I’ve ever had,” she says. “When I woke up, I thought he’d let me sleep for 30 minutes. After that one minute, I was fully alert and totally rejuvenated.”

The rest of the race was far from smooth sailing, though. By the second night, she was hallucinating in earnest. “Everything in the forest was a face or an animal or a person playing a cello,” she says. “I saw a leopard in a hammock that looked pretty comfortable.”

By the time the sun rose on day three, Dauwalter had built a comfortable lead and was able to enjoy the final 17 miles with her husband.

Courtney is amazing! But maybe you should fact check with Sean Nakamura. Maybe contact him directly because he never slept in a crew vehicle. In fact, he didn’t sleep at all. You/she may have him confused with someone else.

Her sister-in-law
Reply to  Smitha

It was Michel Leblanc that was in first and sleeping in the vehicle. He eventually quit and was a DNF.

Hi Smitha, Thanks for clarifying. We received misinformation, and have now corrected it.

At the time (Dry Valley) Sean was not in the lead it was Michel and he did sleep in his crew vehicle for about 45 minutes. Their facts are correct.

They originally had it as Sean.

My bad they had made the correction before I read it.

How do you take a week off of work to run a race?

You make it your vacation time. It’s the same even for those running a regular marathon. If you have a “goal race” or “destination race” like Boston or WS100, you generally just plan for that to be part of your vacation so you can enjoy it. It’s not like most people do this sort of thing very often, and it’s a special event.

On the Joe Rogan Experience podcast Courtney explains that here full time job (as of recent) is running. This was her office for a few days!

PROPS to Courtney DauWalter!! I was at the race crewing for my husband who was attempting the third of the Triple Crown of 200’s, and Courtney’s feat was nothing short of supernatural. Matt and Sean both gave their best, too, but let’s keep our focus on the true hero in this story; Courtney running 240 miles for the OVERALL win in a mind boggling time of 57 hrs!

It’s impressive, but I wouldn’t be surprised if modafinil / adrafinil was involved with how she won by such a large margin. Not saying it should be illegal in these kind of things, just might have helped other runners if they didn’t have to sleep.

Unless she said she took sleep aids, I think it’s best not to imply she did.

This is a little late in the conversation but to Bruce, implying that she could not win without taking medications to keep her awake is hmm….. used to be a typical response from a man when a woman wins outright over men. Get into the 21st century.

At about mile 70 of the WS100 I said to my pacer, “What are all those Scotty dogs doing on the trail.” My pacer said, “There are no Scotty Dogs on this trail.”