John Kelly wins the Spine Race in (male) record time in the midst of Storm Brendan. 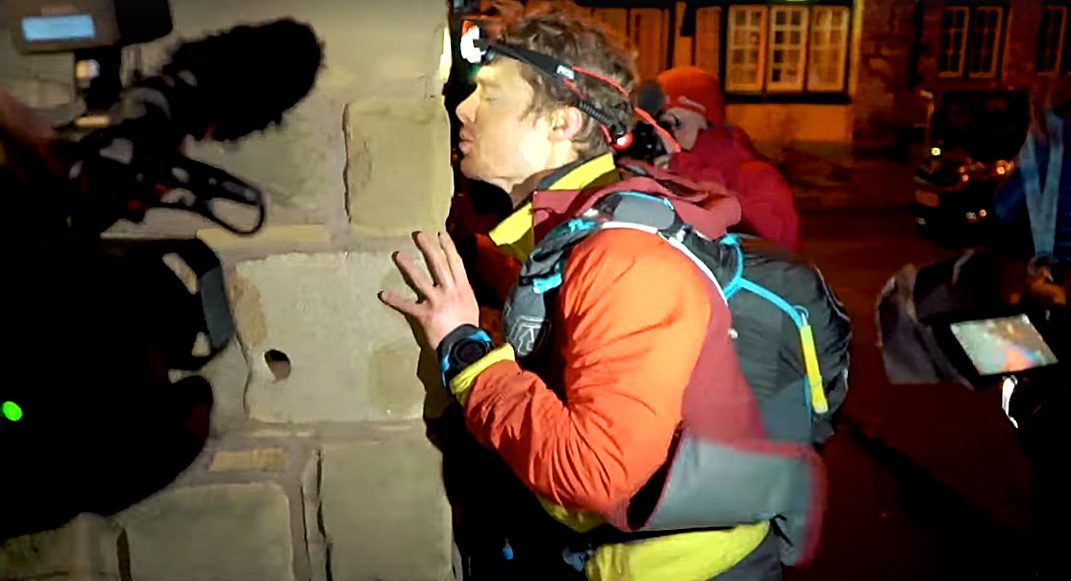 Late last Wednesday night, January 15, John Kelly, 36, of Morgan County, Tennessee, was the first to finish the 2020 edition of the UK’s Spine Race, after battling Storm Brendan for three days. He kissed the finish line wall in Kirk Yetholm as per tradition, and collapsed, saying simply, “Everything hurts.” He had been running for 87 hours 53 minutes 57 seconds, and set a new men’s record. Interestingly, the legendary British ultrarunner Jasmin Paris, 37, stormed into an overall win last year, in 83 hours 12 minutes 23 seconds, and still holds the overall course record. (This year, the women’s winner was Sabrina Verjee from the UK in just over 108 hours.)

The Spine is held in January each year and is the toughest winter ultra in the UK, broadly seen as one of the hardest winter challenges in the world. The non-stop 268-mile race covers disorientating moorland with steep climbs, peat bogs and muddy slogs, and involves difficult navigation, all while exposed to strong winds and severe wind chill. It crosses iconic national parks like the Lake District and the Yorkshire Dales, and finishes at the Scottish border. Depending on the year, it can be desperately wet and cold, or runners can be reduced to a slow crawl over snow and ice.

“The thing that was quite challenging for me was the fact that there was only about eight hours of daylight,” says Kelly, “which makes the sleep deprivation and maintaining energy levels even more difficult.”

In 2012, when the Arctic expedition guides Scott Gilmour and Phil Hayday-Brown first organized the race, only three people finished out of  11 starters. While its appeal has grown every year, the average finish rate is just under 50 percent. This year, 146 runners toed the start line and only 63 finished.

While there was no snow this year, the Spine made up for it in bogs, mud and 80-mph wind leading to bitter-cold windchill factors. And while Kelly is well-known for finishing the super-gnarly 100-mile Barkley Marathons where only 15 people have successfully crossed the finish line in its 33 years, he called the Spine “a whole different challenge.” The two-time Spine winner Eoin Keith, who finished 12 hours behind Kelly this year, affirmed that this was the muddiest year ever.

“The stretch leading to that [Tan Hill] was by far the worst conditions I’ve ever run in as Storm Brendan nailed us with sleet and 60-plus-mile-per-hour winds,” says Kelly. “And then opening the door to a nice cozy pub with patrons there cheering us on just felt like stepping into a whole different world.” Indeed, the Spine does have some lovely surprises for its runners, such as the 17th-century Tan Hill Inn, the highest pub in the British Isles, at 1,732 feet above sea level in the windy Yorkshire Dales.

Aside from the elements, Kelly had to fight off stiff competition. The Briton Jayson Cavill chased him to within 20 minutes up to the last checkpoint 42 miles before the finish, giving him a “good scare.” However, Cavill DNF’d with an injury shortly afterward, as did 2013 winner Eugeni Roselló Solé who was neck and neck with Kelly halfway through the race.

“Having it still be a race after over 220 miles was amazing,” says Kelly. “Feeling my body respond to that after just having gone through a pretty low stretch was incredibly exciting.”

Last year, Kelly had moved to the UK for work and been juggling work and family life with training in a relatively flat part of the country south of London. On his blog, he said 2019 had left him “with a bit of a bloody chin” after failing to score any race wins and abandoning a self-designed challenge of linking the three most famous British trail circuits (the Paddy Buckley, Bob Graham and Ramsay rounds in Wales, England and Scotland, respectively) while cycling in between them.

He did, however, end the year with a fourth-place at the Cheviot Goat Ultra, which shares some of the same route as the Spine and proved to be excellent preparation.

As for training, Kelly says that “you can’t cram for something like the Spine and succeed,” so he focused on consistency and relied on his many years of volume and experience. Working with his coach, David Roche, he saw the final build-up as “just a refinement,” and critically included a dress rehearsal with all the mandatory kit before the race.