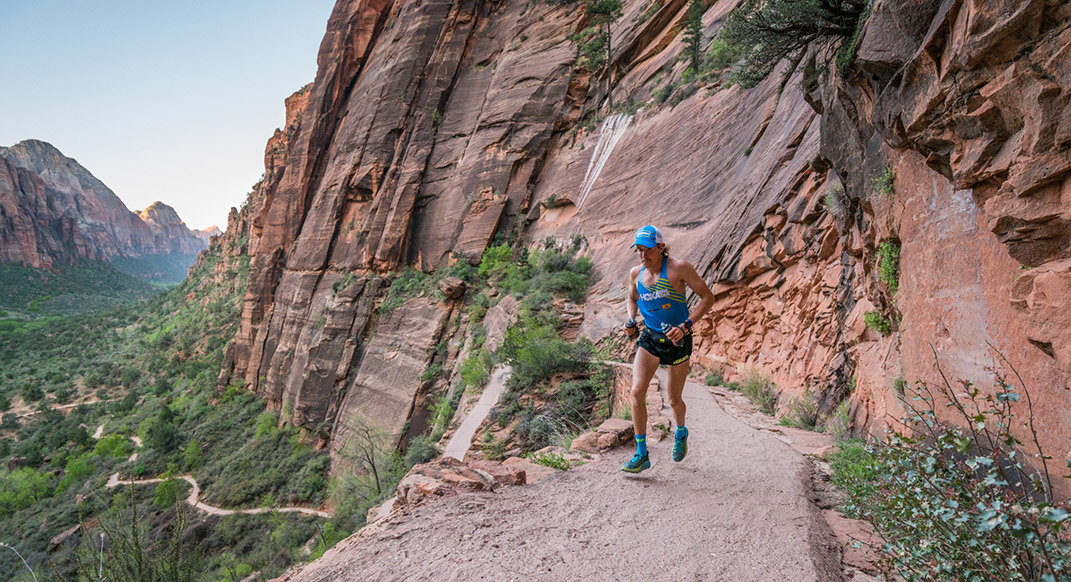 On the afternoon of April 16, 2017, Hayden Hawks was struggling through the deep sand of Hop Valley, Zion National Park, losing precious energy with each lurching step. He was more than halfway through a fastest known time (FKT) attempt on the Zion Traverse—a 48.4-mile route across the dusty expanse of Utah’s Zion National Park. His goal: break the standing record, set by Mike Foote and Justin Yates in 2013.

Hawks, 26, hails from the nearby town of St. George, Utah, and, until about a year ago, he was a virtual unknown in the trail-running world—until he ran his way to an unexpected first-place finish at the Speedgoat 50K.

He is now one of the top names in trail ultrarunnning and, while last weekend’s mud and sand deterred him from achieving his ultimate goal—breaking the standing record by a full hour—he did manage to shave 30 minutes off of the previous FKT, completing the traverse in 6 hours 50 minutes 49 seconds.

Trail Runner caught up with Hawks to learn about why he chose the Zion Traverse, how he trained for the attempt and what he hopes people take away from his run.

Why did you choose the Zion Traverse?

Zion National Park is home to me. I grew up in St. George, Utah, which is just down the road from Zion. I spent a lot of time growing up in the park, took dates to the park and had run there many times before.

I made a goal in high school that I was going to run it someday. I felt like if I was going to attempt this, why not run it as fast as I could, bring that FKT record to St. George and keep it local.

I was planning on doing it in the fall but couldn’t find a date to do it in time to fully recover before my next race. But Jim Walmsley breaking the R2R2R FKT got me even more fired up to attempt it, and I started planning it for this spring.

This was for me, my sponsors and, most importantly, my community.

How did you train?

Most of my training has been geared toward my races like The North Face Endurance Challenge 50-mile Championship, Moab Red Hot 55K, Chuckanut 50K and, next, Transvulcania. I knew if I trained hard for these races, did my 150-mile weeks and hit my workouts right, that I would be ready to break the FKT. The FKT was actually part of my training to get ready for Transvulcania!

Did the day go smoothly?

To be honest I was tired going into the attempt. Two days before, I had a really long nine-hour run with a lot of vert. I sometimes get a little adventurous and end up doing stuff that I probably shouldn’t.

I was kind of beat up from the start, and I could feel it … but I just decided to give it what I had and gut it out. I was on pace to break it by a little less than an hour, but ended up a little over 30 minutes. I couldn’t be happier with this accomplishment, but I feel like I could take more time off [the record]. It was a tough record to break and I give full respect to the previous record holders.

What is your favorite part of the route?

My favorite part of the route is the climb going up the West Rim Trail. I was hurting at this point, and so frustrated from fighting the mud. Then I looked up and gazed into Wildcat Canyon. It brought a since of peace to my running, and reminded me why I was doing this. That this is what National Parks like Zion do for you.

Moreover, I love climbing. I feel like it is one of my strengths. Climbing allows you to see what kind of runner you are, how strong you are mentally, emotionally and physically.

What is the most challenging aspect of the route?

The up and downs that you don’t see on the elevation profile. This route has every type of surface you can think of: slickrock, mud, sharp lava rocks, road, lots of sand, stream crossings, small patches of snow and fallen trees. That is what is so great about it, though. It is so wild and diverse.

You’ve been vocal about wanting to raise awareness for public-lands protection—what do you hope for people to take away from your FKT?

I hope that people will see how much we trail runners value our National Parks and public lands. Some people find joy in big cities, driving fast cars, playing football or relaxing at home. We trail runners love to go out and explore, have adventures and feel a sense of wild. This land is where we find peace, motivation, life, love and happiness. This land is a classroom, a way of life, a means of survival and so much more, for so many people.

My sponsor HOKA ONE ONE just donated $10,000 to the National Park Foundation. I hope others will donate as well, and stand up for these wonderful lands!

What has been your favorite aspect of trail racing, since breaking into the scene last year?

I enjoy traveling and running in so many amazing places and, most of all, I appreciate the people. It is amazing how the trail-running community is so connected, not only with each other, but through the trails, mountains and public lands that we run on.

It’s been so impressive to see him break on to the scene like he has. Excited to see where he goes now! Can’t imagine Western States is too far off for this guy.