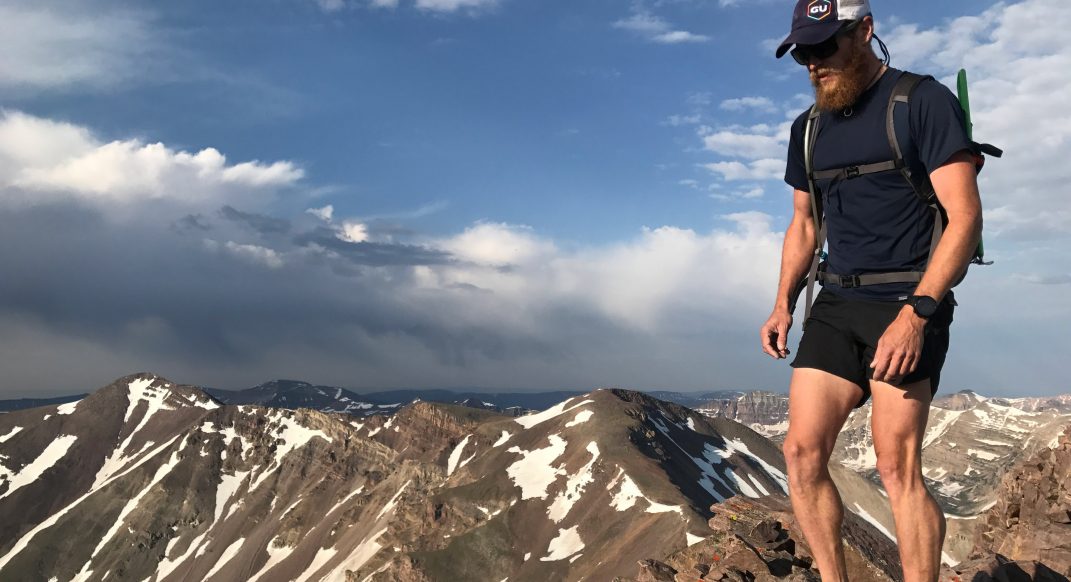 “You wouldn’t really call the Utah 13ers a trail-running objective per-se, because it is third-class boulder-hopping for 30 hours,” says Campbell. “It helps to have a background in both climbing and trail running.”

Both Campbell and Nelson are veterans of the backcountry and the alpine. Campbell, 37, of Salt Lake City, Utah, has finished the Hardrock 100 10 times, and won the race outright in 2010. He has also finished the notoriously difficult Barkley Marathons three times (the only person to do so) and, in 2012, completed the Nolan’s 14 challenge in Colorado’s Sawatch Range.

Nelson, 36, of Pocatello, Idaho, comes from a climbing background. Before turning to running, he was a  mountaineering guide, a semi-pro snowboarder and, in 2012, he was the U.S. Ski Mountaineering national champion.

Nelson has placed well in a number of high-profile ultras, most notably a first-place finish at the 2014 Bighorn Trail Run 100. FKTs in particular, he says, “add a little extra spice to an adventure. I like being able to do something that has a little bit of a competitive element to it, in a place where you could never have a race.”

Campbell and Nelson met through Idaho’s Pocatello 50. Campbell was one of the initial race directors and Nelson, who raced the 50-miler as his first ultra, is the current race director. Since becoming acquainted, the pair has laid claim to the FKT for Idaho’s 12,000-foot peaks, which sparked a desire to run the Utah 13ers.

Located about 45 miles (as the crow flies) from Salt Lake City, the High Uinta Wilderness area is Utah’s largest designated wilderness, and contains all of the state’s 13,000-foot peaks, including 13,528-foot King’s Peak. The Uinta Traverse is a relatively new route, established in 2015 by Jason Dorais and Tom Goth, who completed it in 36 hours 18 minutes 58 seconds. Most of the route is off-trail on scree, talus and exposed ridges.

For both Campbell and Nelson, it was attractive precisely because of how few people know about it. “In Colorado, the 14ers get so much attention,” says Campbell. “But […] in Utah, surprisingly, only a small group of people even know where all the 13ers are […] they are a really underappreciated mountain range in the States.”

In 2016, Campbell had made a solo attempt, which ended prematurely when a boulder fell and sliced his finger. “[It was] the middle of the night and my finger [was] open all the way down so that I was looking at tendons,” says Campbell. “I had to bail. It was 24 miles out on foot just gushing blood.”

Determined to go back and give the route another go, he reached out to Nelson, who readily agreed.

Mostly out of necessity, the pair decided to make their attempt unsupported. “There really isn’t an easy way to do [the route] supported, because pretty much anywhere if you decided to bail, it would be 15-plus miles to a trailhead,” says Nelson.

Anticipating snow up high, they packed their bags on the safe side: down jacket, down pants, ultra-lightweight bivy sack, gloves, rain jacket, pants, traction devices, ice axes, food and water.

“Just three weeks prior to when we did [the Utah 13ers] you probably could have skied most of [the route],” says Campbell. “We were doing recon online, searching ‘Kings Peak, Uinta Mountains’ and all we saw was pictures of people skiing.”

The pair set out at 5:40 a.m., at the West Fork of Blacks Fork trailhead, 52 miles from Evanson, Wyoming, the nearest town.

As it turned out, the snow was a benefit, not a hindrance: they ran up snow-free south-facing slopes and down the snowy north-facing slopes. “Some of the snowy descents were able to save us a lot of time, probably on the magnitude of hours, because the terrain is normally so slow to travel on,” says Nelson.

A couple of mountain goats, a herd of 60 elk and a few people near the trailhead were the only signs of life that Campbell and Nelson encountered.

“It’s really loose. Everything you step on teeters, which made travel exhausting,” says Nelson, a first-timer in the Uinta mountains. “Jared told me it was going to be scree or talus essentially the entire time, but I underestimated how difficult this particular range is.”

As darkness enveloped the peaks, a full moon helped to guide them. For Nelson, the darkness held a certain familiarity. As a father of three and a full-time physician’s assistant, Nelson’s training runs often happen in the wee hours of morning or late at night. Yet running into the night still posed challenges.

Just before midnight, on the “really steep and very loose” scramble up East and West Gunside, fatigue and hunger began to kick in. Then came the thunder.

With a forecast of 40- to 50-percent chance of thunderstorms, both Campbell and Nelson had gone into the trip skeptical that they would make it very far. “I envisioned us going out there, getting a few peaks in and then just sitting out underneath a rock in a rainstorm for 15 hours and then bailing,” says Campbell.

Against all odds, the thunder rolled around them and then past them, without incident. So they kept moving.

“If you do something this long inevitably you are going to have highs and lows,” says Nelson. “Jared and I have been doing this for long enough to know that when you are in a low spot you just eat some food, tuck in behind your partner, put your head down, one foot in front of the other and keep going.”

After 32 hours 50 minutes the pair emerged at the Swift Creek Trailhead—the end of the route—just as the raindrops began to fall.

Next on both Campbell and Nelson’s plates is Nolan’s 14, the challenge to summit 14 14,000-foot peaks in Colorado’s Sawatch Range in under 60 hours. Campbell, who has already completed the challenge in 2012, will be heading out this weekend for his second time on the route, with Gary Robbins, who currently holds the FKT for Canada’s West Coast Double (West Coast Trail and Juan De Fuca Marine Trails) and also famously missed a finish at the Barkley Marathons with a wrong turn two miles from the end.

“[Gary] put so much training into Barkley and it didn’t work out the way we all wanted it to for him,” says Campbell. “So I would love to see him get a high level of satisfaction out of Nolan’s.”

In early September, Nelson is also hoping to attempt Nolan’s 14. “At this point in my running career I enjoy these types of adventures more than racing,” says Nelson. “I see a lot more people and different attitudes starting to enter into the sport, but I think the old-school ultrarunning feel is still [present in] FKTs and big adventure runs. We don’t take ourselves so seriously.”

Campbell and Nelson also have plans for linkups of Wyoming’s 13ers and Montana’s 12,000-footers.

“My suggestion for people who have never thought of the Uintas is to look [them] up and head out there,” says Campbell.  “I think as a group we [trail runners] get goal oriented. We read about something and everybody gets obsessed over the same projects. That is all well and good, but I encourage people just to grab a map, maybe a mountain range they haven’t heard of and start scheming things to do there.”

So exciting to read of this adventure… I will not do things at their pace, but still the article shows their enthusiasm… so I will do something at my pace.